Float on, in Egypt: After Cairo, we go back to basics with a chilled-out felucca ride along the Nile…

If I don’t rest now I won’t have enough energy for a full day of lounging tomorrow and that would be a tragedy. Life on board a felucca is far from taxing.

These flat sailing boats are essentially giant floating beds, their decks almost entirely taken up by thin-yet-comfy mattresses. They sail for a matter of hours or days, depending on the level of stress you seek to alleviate.

This, of course, could well have a direct relationship with how long you’ve spent in Cairo. The capital has many pluses – exquisite bakeries and superlative shopping; amazing architecture and welcoming residents. But the city is also awash with maniacal drivers and more haggling, honking and hawking than even the hardiest traveller can bear.

Fortunately it only takes a few hours on a felucca to return your tension to pre-Cairo levels. I ponder the day we’ve had – a midday departure from the southern city of Aswan, an afternoon nap as the Nile gently carried us northward, a surprisingly delicious dinner on board and a couple of cold beers as the sun set over the river. 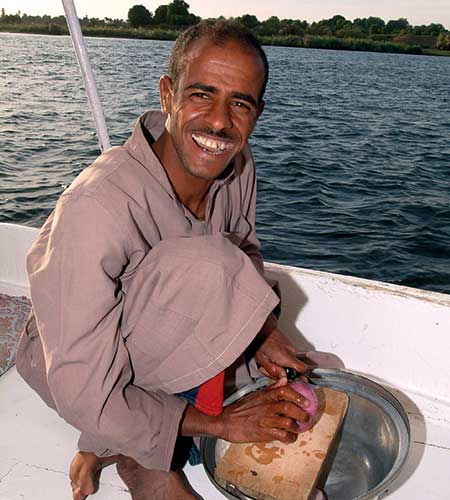 We sleep anchored to the river bank and awake to a typical breakfast of strong, sugary tea and hard-boiled eggs. With the pace of the trip set, we settle in for a day of utter relaxation peppered with the occasional brush with local culture.

Our skipper, who calls himself ‘Captain Hubbly Bubbly’, thanks to his love of the hookah pipe, abandons ship mid-morning to do a little essential shopping for his passengers. His list is an unusual one featuring just two items – toilet paper and camel meat (the latter perhaps necessitating an increased supply of the former).

His replacement appears from nowhere, opts not to introduce himself and promptly embraces felucca life, falling asleep at the back of the boat. Luckily the ride is not a rough one and we take turns at the helm between naps and sips of Egyptian Stella beer.

The river banks pass by, sometimes fringed with palm trees; other sections punctuated with whitewashed houses or the occasional mosque. After lunch we anchor to await the return of Captain Hubbly Bubbly and my eye catches the comical sight of two teenage boys attempting to bathe a cow that is clearly happier out of the water. 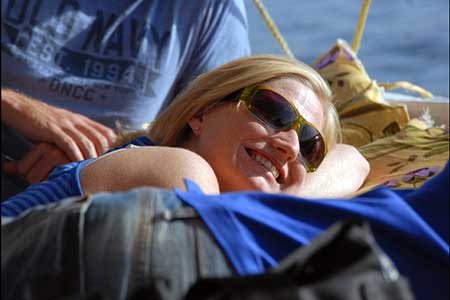 After a 15-minute struggle to lure the animal into the river they admit defeat, leave the cow to its own devices and go for a swim. They approach our boat and wave to us to jump in. Eyeing the murky water and thinking of all those travel ailments I foolishly read up on before leaving home, I’m hesitant, but once my fellow passengers take the plunge I don’t want to get left out.

Wading in fully clothed (a swimsuit seems wholly inappropriate in rural Egypt), I’m shocked to find the Nile a pleasant place to swim and we float around until Hubbly Bubbly returns with an armful of loo roll and a bag overflowing with utterly unappetising meat.

That evening, our second and last on board, we party on the river bank. Barbequed camel turns out to be not only bearable but actually tasty. To celebrate his culinary success, Captain Hubbly Bubbly breaks out his goblet drum.

Along with his introverted crewmate and the skipper of a neighbouring felucca, they put on an impromptu but impressive show of Egyptian music and dance. I try to enjoy, but I know what’s coming next – that heart-sinking, four-word phrase that turns an enjoyable cultural performance into the thing of nightmares: “Now it’s your turn!” 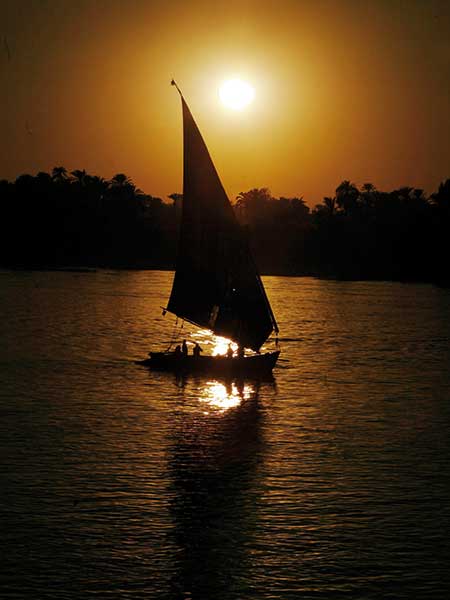 Between a dozen of us we fail to find a single song we know more than three lines of and after attempting two Bob Marley tunes and a Queen classic, we settle for a cringe-making rendition of “Twinkle Twinkle Little Star”.

Hubbly Bubbly rescues us and everyone joins together in a round of “She’ll be coming ’round the mountain”, with improvised verses including “She’ll be riding my felucca” and, of course, “She’ll be smoking hubbly bubbly…”. A fine evening caps off a wonderful day and we retreat to our floating mattress.

The next morning as the felucca nears Kom Ombo, home to a stunning riverside temple and the place where we have to bid farewell to Hubbly and his boat, I feel ready for a bit of a haggle.

In fact, if the occasional fling with a felucca is the prescribed antidote to city life, it won’t take much persuasion for me to emigrate to Cairo.

A visit to Lumbini, Nepal