FitzGerald was Ireland’s prime minster twice during the 80s and is largely credited with starting the peace process.

According to former minister Ivan Yeats, the Queen’s historic visit to Ireland this week would never have happened without FitzGerald’s contribution to Anglo-Irish relations.

In a statement, the FitzGerald’s family said: “He was a much loved and adored father, grandfather and great-grandfather and will be sadly missed by his extended family.

“Details of funeral arrangements will be announced later.”

Known for his eccentric persona as much as his solid economics, Garrett FitzGerald spent his years in politics working to bring together the southern Catholic tradition of his father with the northern Protestant tradition of his mother. 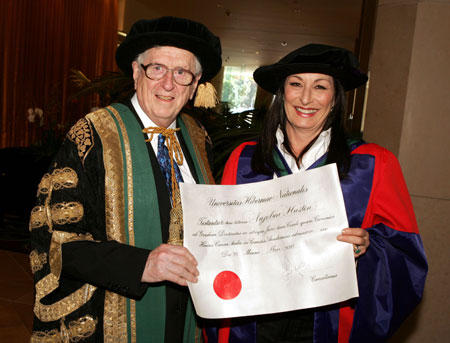 Garret Fitzgerald poses with actress Anjelica Huston as she receives an Honorary Degree at the National University of Ireland on May 6, 2005 in Beverly Hills, California.

FitzGerald grew up in a political family. Both of parents had been involved in Sinn Féin during the war of independence and his father served as minister for external affairs in Ireland’s first government.

As Irish prime minster, FitzGerald sought to end the Catholic Church’s influence over the country by backing the sale of condoms and attempting to introduce divorce.

FitzGerald worked for Irish airline Aer Lingus before becoming an economic consultant and academic, and then a politician.

He became prime minister during the 1980s and in 1985, persuaded Margaret Thatcher to establish an agreement giving Dublin some say over Northern Irish affairs.

Garrett FitzGerald stepped down as leader of the centre-right Fine Gael party in 1987 and while he retired from politics in 1992.

However he continued to be deeply interested in Ireland’s economic situation and wrote a weekly column in The Irish Times newspaper until shortly before his death.

Twitter has been inundated with comments about the death of a Garret FitzGerland.

“I just heard Garret Fitzgerald died. He was a gentleman and a true patriot. He served his country well,” said bigjimdub.

Ikea slammed after photoshopping women out of its Saudi Arabian catalogue