Halloween holidays: From creepy castles to raging zombies, your guide to the best gory getaways in the UK

The truth about Halloween is that any weird noises in the back garden are most likely coming from your neighbour’s kid plotting to lob eggs at your windows while wearing a Scream mask.

Otherwise, it could be the equally terrifying vision of face-painted, sheet-wearing children knocking on your door, complaining that pumpkin-shaped chocolates are shit and asking for a fiver instead.

Honestly, it’s enough to send shivers down your spine. So don’t take any risks, pack up your wooden stake and garlic necklace, and head to one of these grisly UK sites for some frightfully good fun.

There are five haunted sites for you to explore at Freak Week, Hop Farm’s pop-up scare attraction. Each has its own terrifying story for you to get sucked into. Perhaps you will end up a victim of The Slaughterhouse, a factory that uses human remains in its sticky pies.

Or maybe you’ll get stuck in Quarantine, where those who contracted a rather nasty virus are kept – poor things were turned into frothing, rage-filled zombies with an insatiable desire for flesh and now they’re being experimented on by the government with secret anti-virus drugs. Some people have no luck at all.

But even the zombies are probably better off than the school kids who got dragged into The Hatch, an old storm drain. Their bodies showed up a week later. Could you be next? 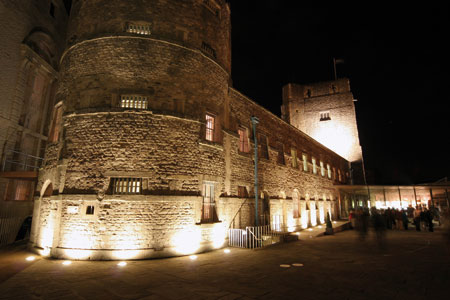 This ghost tour of Oxford Castle reveals a dark and sinister side to this historic city – a woman who survived her hanging only to end up almost dissected by a medical student, an 18th-century celebrity murderess and a notoriously cruel prison keeper are just some of the previous inhabitants of the castle. 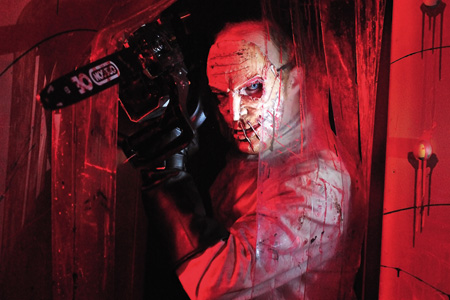 Fancy spending an evening with a family of serial killers in a Slaughter Shed? Not so much? How about keeping some rancid, half-human mutants company in a post-apocalyptic war zone then?

Nah, us neither. But apparently we’re in a very wimpy minority.

Possessed statues, Lockjaw (a demented cannibal) and Gorevinsky Guignol, a blood-crazed theatre impresario, are just some of the unfriendly characters that will be roaming the park.

Does that all sound a bit overwhelming? Solution: you can beat
a hasty retreat to the Fright Bar for a calming tipple.

Not one for the claustrophobic, the creepiest new addition to Thorpe Park’s Fright Nights is called The Passing, with you as a criminal, sentenced to death and destined for hellfire.

The experience starts with you dying – sort of – when your head is covered with a hessian body bag.

Then you’ll find yourself in a nightmare vision of the afterlife, and be punished for your sins. Not your thing?

Then choose from any of the other four extreme horror mazes, including The Asylum, where crazed patients roam, and Saw Alive, which is based on the thoroughly twisted movie franchise.

Natasha Giggs and Imogen Thomas get into a twitter row

The absence of women