Horse polo, how hard can it be? As England’s polo team prepares to play Argentina, TNT finds out firsthand

A couple of hours ago I was doing well to stay on my steed, Destiny, but now I’m at full stretch, hooked horizontal into the stirrups as I try to scoop an orange ball out of a crowd with a big cane stick.

To say it’s a technically questionable move wouldn’t be harsh, but it’s my first time and it’s hard to not get carried away with this “sport of kings”.

The royalness of polo’s nickname condemns it for many as a sport for the uber-rich. It also looks bloody hard. Players ride a horse one-handed and hit a ball with a 50-inch long mallet.

At Cool Hooves Polo, part of the Royal County Of Berkshire Polo Club, they’re keen to expel the elitist myth.

I’m here for a masterclass with England polo captain Jamie Morrison, also club chairman, and Eddie Kennedy, the Irish gent soon to advise me of my idiocy. 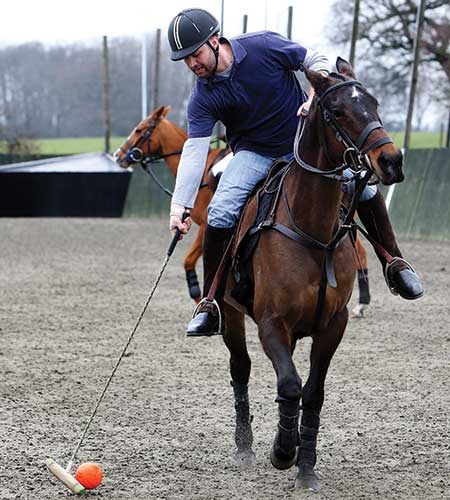 TNT’s Michael happy to stay on the back of Destiny

I take some comfort in Morrison telling me “80 per cent of the game is the horse”, but I wasn’t worried about the horse.It’s safety first as we’re kitted out with helmets and Kennedy runs us through what our morning holds.

He’ll teach us to ride with double reins in our left hand. On a ‘wooden horse’ we’ll hit balls – a specific technique is required to not clock the horse. Then we’ll put it together at the end in a game.

Instead of a traditional polo playing area the size of nine football fields, we’ll be learning in the Cool Hooves Arena Polo space.

This format is the Twenty20 cricket of polo, a condensed area that shows off the traditional skills of the sport but is a faster, more spectator-friendly format, as will be on show May 21 when England play Argentina in the third HPA Gaucho International Polo event at The O2 Arena.

“For the layman, you go to a normal summer polo match on the grass and it’s all so far away,” Morrison explains. “When it goes to the other side of the field, spectators have a drink and wait for it to come back. In the arena, the crowd feels the game, feels the power of the horses and what they can do. It’s a bit like going to an ice hockey match.” 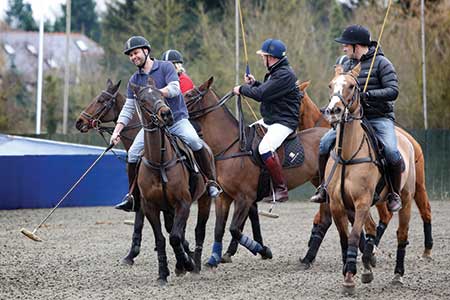 Before we even begin, there’s a casualty – my jeans crotch is even less flexible than me as I blunder onto Destiny. Four reins in my left hand, we’re walking around a circle. So far, so good. Polo ponies (as they’re called, but they’re full-grown horses) are incredibly well-trained, especially schooling ones like my new best friend.

“If you do nothing, she’ll do nothing,” Kennedy says. A gentle lift of the reins finds first gear, a little higher is second, or a trot. My right hand is lost, though. “What are you grabbing?” Kennedy asks, as I clutch the front of my saddle or wave it like Destiny’s a bucking bronco.

Within what seems minutes he tells Destiny and I to do U-turns, first at a walk and soon at a canter (third gear).

Thankfully, Destiny’s on board. To prove the skill of the horse, he asks us to trot across the playing area and stop at the wall when Destiny’s nose touches it. Easy, no thanks to me.

Confidence isn’t high, and plummets when I’m asked to stand while riding. Not only is polo riding a one-handed pursuit, it’s an on-your-toes, arse in the air, quad and calf-hammering thing, too. Willing away cramps in muscles I didn’t know existed, crash-course one is over.

I’m more comfortable hitting balls – can’t be that different to hitting red ones with a bat. 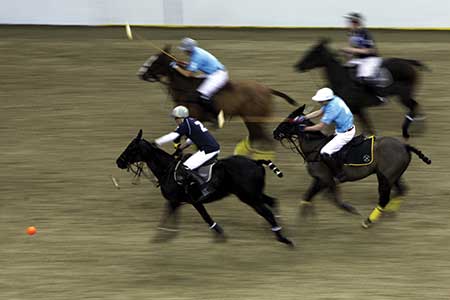 England and Argentina at full speed

A pendulum action, the swing takes place in a zone parallel to the wooden horse (about the height of Destiny). The arena ball isn’t the rock hard one used in regular polo, but an orange mini-football – lighter and easier to control, Morrison says, adding to the skill showed by the pros.

We hit backwards, forwards, on the off-side (right) and the near-side (left), which is tricky as you cross your body (no lefties allowed, sorry).

Back on Destiny, and with a stick in hand, my riding skills (loose term) skyrocket. A friend suggests I was like a puppy who’s seen a “Ball! Ball! Ball!” It’s hard to argue.

I feel like a pro as Destiny prances towards the ball, allowing me to focus on making contact with it.Into a game situation, my fellow learners are as clueless as me, but I soon find the breakaway tactic popular in under-sixes football useful.

With Kennedy on my team and Morrison for the opposition, the ball is kept moving by an expert when it gets clogged in a sea of horses and sticks. When we get the ball, I break from the pack and Kennedy, with a smooth sweep, finds me repeatedly in space for a breakaway (I was barely beyond walking pace, but that ruins the image).

I even score a couple of times. Then, about to shoot, and perhaps suspecting me of getting too big for my boots, Morrison glides in behind to hook my stick before my shot. Another skill learned. At the end, I do resemble that puppy, with a shit-eating grin. “How’d I go?” I ask Kennedy.

“Yeah, you were one of the top performers, you’ve got a future in the game.” A cracking quote if not through a chuckle. “It really takes time to get up and learn. We’d have to get you up 100 per cent riding, that’s the most important, and that takes years of practice. If you can’t get to the ball you can’t hit it. A crash course like this, you’re only going to realise it’s a tough sport.”

So when Morrison takes on South America’s best next month and it looks easy, I can assure you it’s not – even with Destiny on his side. 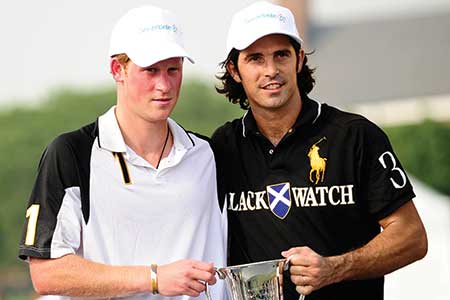 When Jamie Morrison’s England team goes stick-to-stick with Argentina at The O2, punters can be assured they are watching polo as good as it gets.

The Nacho Figueras-led Argentines are streaks ahead of the world in outdoor four-a-side polo, but England are at the top in the smaller three-per-team arena format.

“It’s a great rivalry,” Morrison says. “Last year the game went to a penalty shootout and we beat them.”

The rating of players worldwide from zero to 10 goals keeps games even. Only Argentina has players rated the maximum – Morrison is an eight. This game will allow a total goal rating of 22 on each side, “a very high level”, Morrison says. “It’ll be full-on action, very fast, I’d recommend anyone to come and check it out.”

In addition to the polo, The O2 hosts a full-on South American fest, with food from Gaucho, live music, DJs and the biggest ever Argentinian wine tasting overseas.

Argentina proposes Falklands badges to be worn by athletes at Olympics