With eight distilleries tucked into one wildly beautiful island, Islay should be flooded with tourists – just as deluges of dram-sluggers crowd Scotland’s biggest whisky region of Speyside on the mainland. But such is the remoteness of this Hebridean isle, the tourist hordes have yet to really discover it. This leaves the locals to get on with life much as they did centuries ago, when the legendary Lords of the Isles ruled swathes of Scotland from their Islay stronghold.

As I fly in, it’s easy to see why the lords chose Islay as their home. The island is painted in vivid and dramatic colours – a collage of rolling hills, sweeping sand-strewn bays and craggy coastline, with the shadowy ‘Paps of Jura’, the lofty mountain range that dominates the neighbouring island of Jura, rising to the east.

This natural beauty is echoed in Islay’s whisky distilleries, which all produce single malts with an intoxicating aroma of peat. Combining with the fresh island water and traces of seaweed, it is a taste that draws in everyone from connoisseurs through to timid after-dinner drinkers (the type who normally profess to not liking the drink that is eulogised in Gaelic as ‘Uisge Beatha’, or the ‘Water of Life’). Today’s eight distilleries – Ardbeg, Bowmore, Bruichladdich, Bunnahabhainn, Caol Ila, Kilchoman, Lagavulin and Laphroaig – produce world-renowned whisky.

The best way to learn more about the hallowed dram is on a guided tour. Of the five I try out, easily the best is at Ardbeg, an ambitious distillery that only re-opened in 1997 after being mothballed in 1981. Ardbeg shares Islay’s most spectacular stretch of coastline with its equally picturesque neighbours Lagavulin and Laphroaig. The team here has created a great tour around the full workings of the distillery. It culminates in a café that even manages to draw in non-whisky-drinking locals with a range of great meals and comforting traditional desserts such as clootie dumpling (not an unfortunate disease, but a Scottish suet pudding made with breadcrumbs and sultanas). 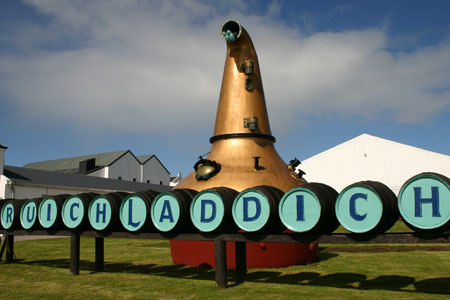 After asking directions from their stillman, I hike from the distillery up the rough hillside to Loch Uigeadail, where Ardbeg’s peaty water is sourced. The tradition is to ‘return’ a dram or two to the loch, but there was no way I was going to waste what is now my favourite island malt!

Bruichladdich has also recently been reborn with a real attempt to employ a range of traditional methods. On its tour, I learn about the Victorian-era distilling equipment that attracted some unexpected attention from the US Defence Threat Reduction Agency (DTRA). I’m told when Bruichladdich’s owners first received an email from DTRA, they thought it was a joke. But it turned out the distillery’s webcams, which record the antique distilling process, had become the focus of an intelligence operation that mistook the equipment for a potential terrorist threat.

In 2005, the distillery again made the headlines when it was involved in the ‘capture’ of a British spy mini-submarine. After discovering the vessel, laden with high-tech surveillance equipment, the distillery reported it to the Ministry of Defence (MoD). A series of strange exchanges reportedly followed, during which the MoD first denied it was theirs – despite there being MoD identification on it – and then seemed to imply that the distillery had stolen it from them. (The distillery launched a ‘Yellow Submarine’ malt to commemorate the occasion.) Bruichladdich’s tendency towards the dramatic ensures its tours are packed with entertaining tall stories.

I end my personal whisky trail at the smallest and newest distillery on Islay, Kilchoman – the first to be built on the island in 124 years and only opened in 2005. In its first year, this small-scale farm operation only yielded seven casks, though production is now stepping up a gear. Kilchoman links the present to the island’s past, with its storyboards depicting the days when countless little stills bustled away in every village. A perfect end to my tour around the most captivating corner of Scotland’s whisky trail.

The island’s most charming hotel, Port Charlotte, has a romantic restaurant. Snag a window table if you can. The Loch Indaal scallops flavoured with Islay whisky are gorgeous. (portcharlottehotel.co.uk)

The best place to eat at any of the distilleries, Ardbeg Distillery is worth going to just for the food. Good value mains include local meat and seafood. (ardbeg.com)

Bowmore’s Lochside Hotel has one of the best-stocked whisky bars on the island, boasting a comprehensive collection of rare Islay tipples. (lochsidehotel.co.uk)

At the Port Askaig Hotel, you can recline with views across the Sound of Islay to the epic mountains of Jura. Sells a selection of blended whisky at £1 per dram. (portaskaig.co.uk)

Port Charlotte Hotel is a charming old whitewashed waterfront dame in the pretty eponymous village. Make sure to book a room facing the sea. Double rooms start at £170 and include a full Scottish breakfast. (portcharlottehotel.co.uk)

The island’s official Youth Hostel is housed in an old whisky warehouse by the sea in pretty Port Charlotte. Rooms start at £16.25 pppn. (syha.org.uk)