Colombia’s Caribbean Coast is heaven for hikers. TNT’s Janine Kelso trekked through the jungle and visited a cocaine lab…

A seemingly never-ending series of moss-covered steps rise up out of the river like an MC Escher sketch. After three days of Indiana Jones-style trekking through steamy dense jungle in Sierra Nevada de Santa Marta, in Colombia’s Caribbean coast, followed by a 20-minute wade in a fast-flowing river, we’ve almost reached our destination.

Flanked by swarming jungle, the 1500 crooked and slippery steps make for a tough ascent.

After passing up and over a mist of clouds, we arrive at the top of the stairs at the mountain’s summit, the dramatic setting for the Ciudad Perdida (“lost city”), an ancient city dating back to 500 years BC, where the Kogi Indians once made their home.

BOOK A TOUR OF COLOMBIA

Scattered across a 4km radius are the remains of the ancient city: more than 100 weed-encrusted and palm-fringed stone terraces that once provided the base for the villagers’ wooden huts, linked by a labyrinth of winding paths and steps, studded with wildflowers.

As our group of 10 are the only people wandering around this crumbling city, it feels like we’re discovering a lost world, one that has sat forgotten for hundreds of years. There is an eerily quiet feel to the place, especially when you consider thousands of people lived here until it was abandoned during the Spanish Conquest.

And with its endless hidden staircases, untamed vegetation and lack of tourists, I feel like a child in a fairytale exploring a secret garden.

The Lost City was unearthed in 1972 by treasure looters and has since been hailed a national gem by the Colombian government. But thanks to its remote setting, it has not become as touristy as Machu Picchu and the hike itself is nowhere near as well-trampled.

The only way to reach it is by doing a five-day gruelling and sticky hike, sloshing through rivers, tackling steep hills, sleeping in hammocks and bathing in waterfalls, while fending off mozzies. Alternatively, it’s possible to visit the spot by helicopter if you’re willing to splash the cash (according to rumour, Colombian pop princess Shakira opted for this option).

The site’s lofty position offers sweeping views of the lush jungle-clad mountains as well as revealing a sky alive with exotic birds and brilliantly coloured butterflies.

Just below us is a clutch of pretty thatched huts, lived in by Tayrona Indian tribes, descendants of the Lost City inhabitants who watch over the city.

The natives say they knew about this city long before it was ‘discovered’ in the 1970s, but unsurprisingly they wanted to keep this peaceful retreat to themselves.

Our guide tells us that the city was built to make farming possible at different altitudes and the paths were designed in such a way that the residents could hear people coming from great distances.

Unfortunately, the Tayrona Indians aren’t the only jungle dwellers. In the 1970s, vast swathes of forest near the Lost City were cleared to make way for marijuana production, later replaced by still-thriving coca plantations – large-scale operations that are guarded 24/7 by paramilitaries.

Cocaine lab in the jungle

During the trek, we are lucky enough not to bump into any gun-wielding guerrillas, but we do visit a cocaine lab.

More akin to a garden shed than a hi-tech military operation, the lab is loaded with buckets of grubby chemicals. The farmer candidly outlines the process for making the nose candy, describing how workers pick coca leaves from prickly bushes under the hot sun.

“The workers crush the leaves with their feet for about an hour and they don’t wear clean boots,” he says, grinning. 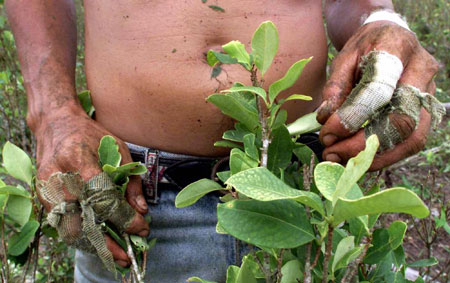 The leaves are then mixed with a heady blend of gasoline, water, calcium carbonate and salt before the gasoline is siphoned off. The final product is normally mixed with aspirin and other chemicals to give
it a white colour.

“If the final powder contains 25 per cent cocaine, that’s good,” he tells us.

“It’s normally about three per cent.”

This farmer produces about 1kg of cocaine every month, for which he is paid about $1000 (£617). He used to farm coffee but a friend suggested he would increase his earnings by producing cocaine.

We are all struck by how grimy and unhygienic the production process is.

“I do this tour to try to put people off taking cocaine,” the farmer told us with a smile.

After our trek, we head to a small fishing village near Santa Marta called Taganga for New Year’s Eve.

Music is pumped out of beatboxes propped up outside people’s houses and we spot numerous ‘guys’ which are burned on January 1 to mark the end of the old year and the beginning of the new year. Most of the ‘guys’ are clutching beer bottles and sporting huge erections.

Up until that point we’d not seen a sniff of cocaine in Colombia, but that night at a club, my mate and I were quite surprised to see such a surfeit of wasted revellers.

An American guy began to speak to me about his travel experiences.

“Do you know which country I would really suggest that you visit?” he asks.

“Colombia” he says. “You must go there. It’s fantastic.”

The walled city of Cartagena is one of Colombia’s top draws thanks to its colonial architecture, beautiful beaches and lively squares dotted with pavement cafes and top-notch restaurants. Enjoy a cocktail at Café del Mar, set on the historical fortress walls, overlooking the Caribbean Sea.

Don’t miss the Botero museum to marvel at the Colombian artist’s paintings of plump people and objects: expect portly babies and dogs, plus-sized sculptures and even a chubby Mona Lisa. Don’t wander alone in Bogota at night; take taxis everywhere.

For a dose of bling, visit the recently spruced up Gold Museum, loaded with thousands of gold objects found throughout South America, making it the biggest goldwork collection in the world. 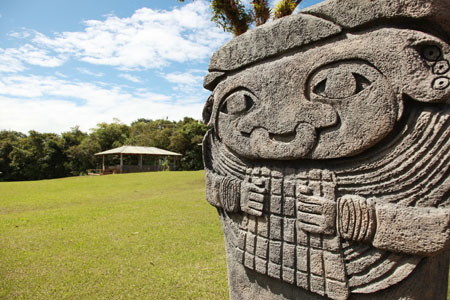 Sited in the south of Colombia, the San Agustin archaeological park is home to hundreds of monster-like stone sculptures carved between AD 100 and 1200. The sculptures are set within a picture-pretty park made up of lush-green vegetation, forests and dramatic valleys. If you choose to visit the archaeological park, the Foreign and Commonweath Office suggests you enter and leave on the main road through Neiva.

Colombians refer to this idyllic national park as ‘paradise’ and for good reason. Home to mangrove swamps, corals, algae prairies and cloud forests, the park teems with howling monkeys, deer, condors, reptiles and even pumas. The park’s highlight is its unspoilt palm-fringed beaches, reachable by walking for an hour through jungle.

Colombia’s undisputed nightlife capital is a hotbed of fiestas, street parties and sizzling salsatecas, the best of which can be found 12km east of the town centre in the Juanchito district. The most famous salsa “dance-o-dromes” include Chango and Agapito.

If you fancy a bar crawl, swing by main drag Av Sexta Corridor, lined with bars and clubs pumping out hip-hop, reggaeton and disco. Those in the know say that Cali is home to Colombia’s most beautiful women. It’s also the plastic surgery capital of the world. Go figure.

WHEN TO GO: Colombia enjoys a tropical climate. The rainy season runs from April to June and September to November.
GETTING THERE: Fly to Bogota via Madrid with Iberia or via Paris with Air France.
GETTING AROUND: Fly between cities or take a coach.
VISAS: No visa is required for stays of up to 90 days.
CURRENCY: Colombian Pesos. 1 GBP = 3051 COP.
LANGUAGE: Spanish.
GOING OUT: A beer is about £1.
ACCOMMODATION: Hostels cost from £5 a night.
GET MORE INFO: proexport.com.co and lata.org

Where in the World… Sahara Desert of course!