Keep on truckin’: We reveal our favourite Sydney food trucks

Conventional restaurants are usually pretty good and yet, haven’t you ever wished that one would come to you, instead of the other way around? Well, last year super mayor Clover Moore and the City of Sydney Council answered your prayers and let nine food trucks loose to roam the streets on a one year trial. They were so successful that the Council said they could stay. So, when you’re hungry, jump on Twitter, find out where they are and chase them down. Here are our top picks.

The grub: American BBQ
Providing delicious street food and promoting street art – that’s the philosophy behind the Eat Art Truck. The menu is American BBQ with a Japanese influence. Think slow-cooked meats with crispy, creamy salads and chilli sauce, served in a bun that fits perfectly in your eager hands.

The guys designing the menu are Brenton Balicko, a former chef at Quay, and Stuart McGill, a former sous chef at Tetsuya’s. Expect to be impressed. Be sure to try the chicken wings ($8) dusted with shichimi peppers and mayo, followed by the pulled pork served in a bun with mustard cabbage and a choice of sauces ($12).

The black truck gets a street art style makeover every month. The truck’s current artwork, a black and white portrait of rapper Biggie Smalls, was painted by artist LINZ. Previously the truck has showcased works from other renowned Australian artists including Beastman and Ears.

You can count on the truck to be at Sydney’s favourite attractions and festivals. Its recent appearance at events like Vivid Sydney and the Sydney Writers’ Festival means you can quickly refuel without leaving these events. LR
How to track it down: @EatArtTruck 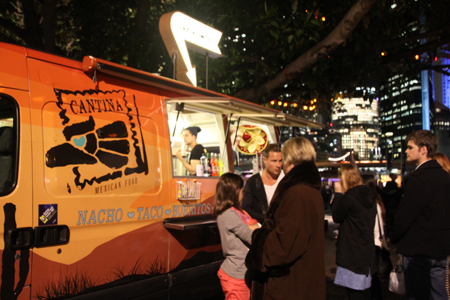 The grub: Mexican
You all know that the best Mexican food is Mexican street food and these guys have taken this concept quite literally as they whizz around the streets of Sydney in their bright orange van.

When the Cantina Mobil light is flashing and their shutters are open there’s usually a long line forming filled with Sydneysiders keen to get their taco or burrito fix. Because, let’s face it, Sydney bars have turned us all into Tex-Mex addicts.

These guys were actually the first company to get on the food truck, er, train in 2011 when they started their engines on the Northern Beaches. The soft shell tacos are your best bet, for $5 they’ll load them up with chipotle beef, chicken or pinto beans and smother them in hot cheese sauce, tomato salsa and chilli corn. The burritos follow much of the same in terms of flavour, but pack more of a punch with their tortilla filled girth.

Our advice? Ask for guac on everything. And BYO hooch for their non-alcoholic Sangria – we’re not sure that Clover will ever allow the trucks to serve booze. Cantina shows up at most Sydney festivals (like Vivid where we caught them) so they’re usually bombarded from the moment they set up shop.

Get there early to avoid missing out on a taco, or one of the four lonely stools they provide for al fresco dining. AH
How to track it down: @CantinaMobil 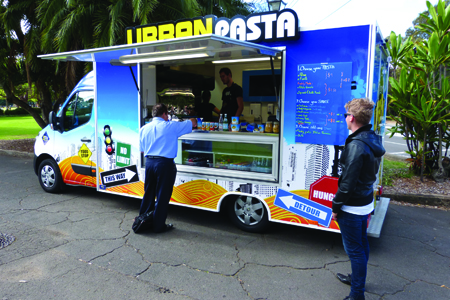 The grub: Italian
I’ve always loved pasta. There’s something very comforting about a big bowl of spaghetti bolognaise or carbonara. Of course the naysayers out there will have their two-cents worth. It’s full of carbohydrates and stuff that makes you fat. I know, but it doesn’t stop me enjoying it.

The truck itself is ingeniously set out and equipped. There’s a full pasta cooker in one corner where fusilli, penne, potato gnocchi or spinach and ricotta ravioli are all made to order for you. Alongside that are steaming vats full of the various sauces: which include bolognaise, pesto, Italian sausage and amatriciana, to name just a few.

I ordered the gnocchi with the amatriciana, which is a kind of spicy tomato sauce complete with finely chopped Spanish onion, chorizo and bacon ($11.50). While my friend had the Italian sausage with the ravioli, which worked out to be a little bit more expensive ($13.50). The amatriciana sauce was nice and sharp while the onion, chorizo and bacon beautifully complemented the already delicate and hearty gnocchi. The Italian sausage ravioli came in a light pink sauce that went well with the rich, creamy filling of the ravioli.

While the price might seem a little steep, the servings were very generous and on a crisp autumn day in Victoria Park the pasta went down a treat. HR
How to track it down: @UrbanPasta 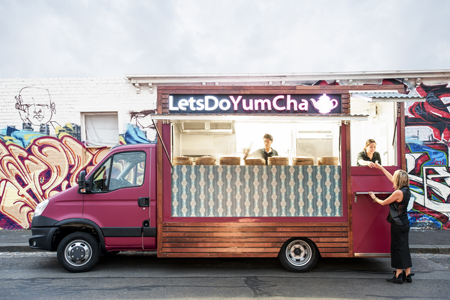 The grub: Chinese yum cha
Everyone loves yum cha, but it’s hard work sometimes. If you get stuck at the back of the football field-sized restaurant in between a folding screen and the toilet, you never quite get the trolley you want to stroll by. Or you end up with a plate full of chicken feet because you weren’t quite listening.

They make it even easier for you to try everything with their six for $10 special, so grab a plate, pour your soy and chilli sauces and find a spot in the sun.

The truck is usually found looming around parks near Central Station and Surry Hills at lunch time. Apparently, the truck folds out like a transformer into a yum cha-style trolley, although when we were there it looked very truck-like.

Still, it’s all about the fresh Chinese steamed goodness and, as of yet, no chicken feet in sight. AH
How to track it down: @YumChaTruckSYD 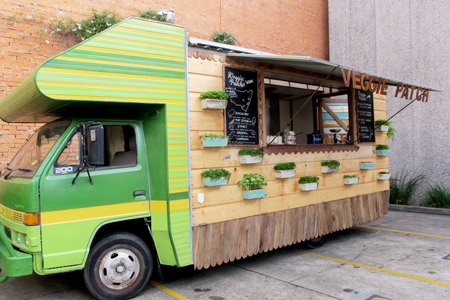 The grub: Vegetarian/vegan
I was apprehensive about approaching the Veggie Patch, which is Sydney’s chief vegetarian and vegan food truck. I am a committed carnivore and while I had eaten vegetarian food before and rather enjoyed it, I always felt something (meat) was missing.

However the Veggie Patch’s truck has a huge amount of character. From side on it actually looks like a garden shed, with pot plants hanging from old weatherboard walls that look as though they were lifted from a cottage somewhere in the countryside.

As for the food, I put myself in the lovely woman serving’s capable hands. She recommended the zucchini burger ($10) and a side of sweet potato chips ($5). The burger was certainly very filling; the zucchini patty was thick and juicy and was beautifully complimented by caramelised onions, beetroot, homemade mayonnaise and a beautifully tangy sauce.

Not only did it taste great, it looked amazing. Reds, oranges, whites and purples all blending together with each bite. The little styrofoam container ended up looking so much like a Jackson Pollack painting that I was loathe to throw it away.

The sweet potato fries were a nice accompaniment to it all, crunchy, crisp and yet somehow still good for you.

While it’s fair to say that I’m not planning on going vegetarian anytime soon, I will definitely go back to the Veggie Patch. HR
How to track it down: @Veggiepatchvan 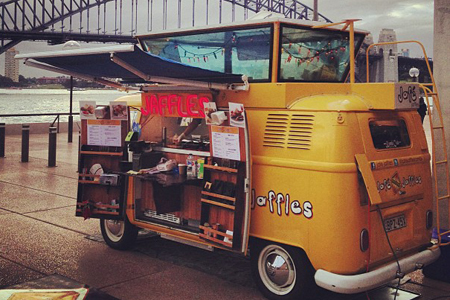 The grub: Toasted sandwiches
Who doesn’t love a humble toasted sandwich? In many ways it is the ultimate comfort food and yet it would be hard to argue that a few slices of bread, some meat, cheese and a jaffle iron are the sorts of ingredients one uses to make quality cuisine. Until now, that is. It’s fair to say that the kind of toasties you’ll find being served out of Jafe’s Jaffles truck are certainly a bit more fancy than your standard ‘ham and tasty cheese’.

I caught the crazy looking Jafe VW truck in the illuminated shadow of the Opera House on the last night of the Vivid Festival in Sydney. Amongst the fleet of food trucks that had descended on the festival, Jafe’s truck might be the smallest, but it can afford to be. After all it only needs to house a few ingredients and a couple of irons.

Despite not being one of the food trucks endorsed by the City of Sydney, the line for the sandwiches was quite substantial, all of us excited to get something warm into us on this crisp, winter’s evening.

The menu at Jafe Jaffles made for some interesting, punny reading. I ended up selecting the $8 ‘Bob Pork’ (named after our loveable ex-PM) sandwich, a fascinating mixture of pork belly, white cabbage and special ‘secret mayonnaise’. It was deliciously sweet and salty at the same time.

My friend went for the hilariously named ‘David JaffleHoff’ ($7) – spaghetti and bolognaise sauce inside a toasted sandwich. It smelt great, but my friend decided to be selfish and didn’t let me taste any of it.

Do yourself a favour and get toasty. HR
How to track it down: @JafeJafflekombi or facebook/jafejaffles