Unlike the scenes of hysteria in the Velodrome, the BMX event, held at the Velopark, was a relatively subdued affair.

However Buchanan and Walker looked pleased with their efforts after the pair shot into first and second place. Buchanan posted a time of 38.434 seconds, beating former world champion Sarah Walker by 0.210 seconds. Colombia’s Mariana Pajon was third in 38.787. 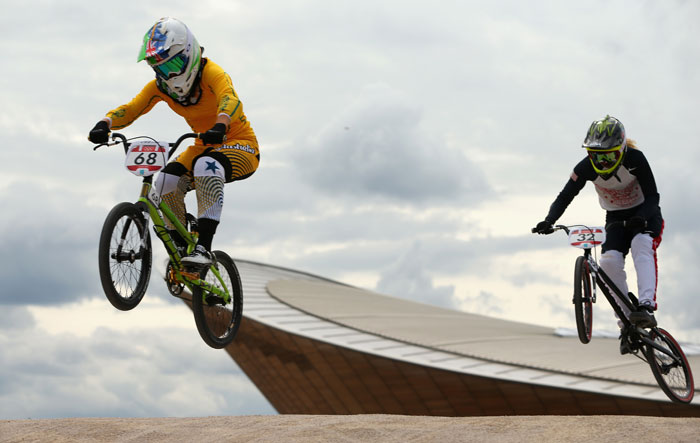 After today’s seeding event, female BMX riders will enter the Olympics semi-finals, skipping the quarter-final stage that male contenders will go through.

British BMX rider Shanaze Reade’s came in fifth and will clearly have her work cut out in the London 2012 tournament. Team GB will face far tougher competition in BMX than it did in track cycling.

BMX was first included in the Olympics in the Beijing Games. Spectators should get steadily more hyped up as the event continues and the competition becomes more dazzling and ramps higher.

The new London 2012 BMX track is located next to the Velodrome in the north of the Olympic Park. The men’s track is 450m long and the women’s 440m.

Bunny-hop – to lift both wheels off the ground at once

Holeshot – the first rider to take the lead after the start

Whoop – a small, wave-like bump in the track