London Diary: What’s on in the capital this week

There are 280 animated films from 30 different countries being shown at this year’s festival, which is based at the Barbican Centre but extends to the Horse Hospital in Russell Square and the Rio Cinema in Dalston. There are some fantastic entries, showcasing a range of different styles, and the fact the festival attracts films from throughout the world ensures some offerings are truly offbeat. Check out Bertie Crisp, the short story of a half-bear, half-panda who lives in a caravan park with his wife, Grace, who is a rabbit. Truly bizarre.

Poker in the park

It sure makes a nice change from playing poker on your laptop in your dingy bedroom or in your mate’s smoky, pizza-strewn living room. Instead, this poker festival lures card sharks into the sunshine, offering live music and comedy as well as a chance to play some cards. Don’t forget to bring your lucky poker visor.

There’s interactive art, animation workshops and stacks of performances at this festival celebrating the role of music in visual culture, whether it be films or video games. You can explore the use of music in horror films or listen to a full orchestra reprise famous themes from video games.
A must for film buffs, audiophiles and game geeks.

Returning for its fourth year, this arts festival is curated by film director Mike Figgis and brings together myriad  installations, discussions, peformances and interviews.  It’s all very high-minded, taking the pulse of popular culture, but if you get bored, you can always enjoy the spectacular surrounds of the Opera House. 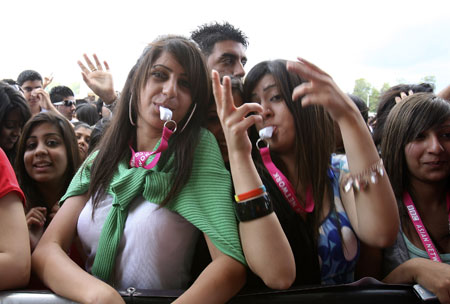 Last year, more than 90,000 people showed up at Gunnersbury Park for this subcontinental festival that celebrates the region’s food, music and culture. It’s a sprawling event, with all the colour and chaos of a Bollywood epic. And you can guarantee that you won’t go hungry – there are 25 different food outlets cooking up on-site.

Ruby Wax was one of the biggest names in British comedy in the Eighties, her razor-sharp wit and wry observations making her a star. Now, Wax has returned with a confronting show about her own mental illness. It doesn’t sound a barrel of laughs, but awkward moments are interspersed with comic gold.

Central London will be closed off to motorised traffic, allowing cyclists, experienced or otherwise, to take over the city for a day. The route takes in plenty of London’s best sites and landmarks – it’s a wonderfully laidback way to see the capital, much of which can be overlooked when you’re stuck on the Tube or dodging traffic.

Hershesons offer quick-fix hairdos for those on the run