A photo of Michael Jackson’s dead body and a tape recording of his slurred speech were presented during the trial of doctor Conrad Murray, who is accused of causing the singer’s death by administering a lethal dose of Propofol. The public release of both the death photo and the tape have shocked many of Jackson's fans.

The picture shows Michael Jackson lying dead on a hospital trolley, his mouth hanging open, looking thin and pale. He is dressed in white medical robes.

Many Jackson fans have expressed their shock at seeing the death photo.

“I for one did not want to see Michael Jackson on the slab! He has family and children!!! #SICK” tweeted kierandean.

“Following the Michael Jackson death trial on TV, it's all a bit too macabre and sad, poor guy,” said mazz_56.

“Anyone else think that the pictures of Michael Jackson lying dead on a hospital trolley are incredibly bad taste? We don't need to see that,” wrote gemmamcmurray.

A recording of the singer, made on Doctor Murray’s iPhone six weeks before Jacko’s death, was also played by the prosecution as the trial began.

Listen to the recording here.

In the recording, Jackson speaks in a deep voice, sounding unrecognisable from his familiar high-pitched tone, as he tells the doctor about his ambitions for the This Is It concerts planned for London’s 02.

“We have to be phenomenal,” Jackson slurs in the recording.

The trial prosecution used the tapes to demonstrate how Jackson’s drug use was spiralling out of control. 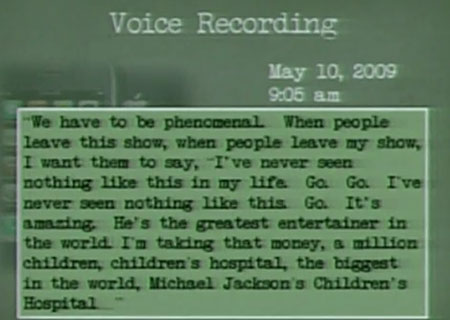 Lead prosecutor David Walgren claims the recording proves that Murray should not have administered powerful anaesthetic Propofol, said to be the cause of Jackson’s death.

Walgren went for the shock factor, attempting to show that Murray was responsible for Jackson’s death for through “gross negligence, medical abandonment and repeated incompetence.”

He claims the physician did not have Jackson’s health at heart and was more interested in the “lucrative $150,000-a-month contract” he had for looking after the star.

After showing jurors at Los Angeles Superior Court a picture of Jackson’s dead body lying dead on a hospital trolley on June 25 2009, Walgren contrasted the image with another, taken the previous day, Which showed the singer looking well and happy at a rehearsal.

Murray denies involuntary manslaughter, claiming that Michael Jackson was responsible for his own death by taking a drug cocktail overdose without his knowledge.

Jackson died aged 50, killed killed by an overdose of Propofol combined with other drugs, a coroner ruled. Valium, Lorazepam ad Midazolam were also found in the singer's body.