Murray was expressionless as he was led from the courtroom in handcuffs, but outside protesters cheered as the verdict was announced.

Jurors took 10 hours to reach a unanimous decision that Murray was guilty of involuntary manslaughter. Reading out the verdict, the judge branded the physician a “threat to society”.

Murray pleaded not guilty to giving Jackson a fatal dose of the powerful propofol, claiming the 50-year-old singer administered the lethal dose himself. 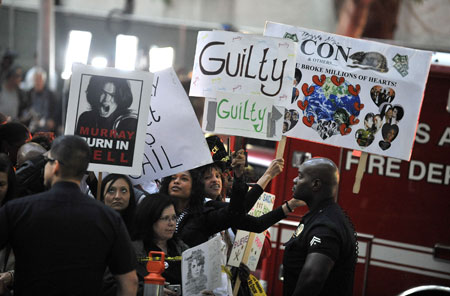 However prosecutors argued that he was grossly negligent for administering the drug in a home setting, failing to monitor Jackson, delaying a call to emergency services and failing to tell emergency medics he gave the singer propofol.

According to reports, Murray has been placed in isolation and on suicide watch in Los Angeles County Jail.

Another hearing is scheduled for November 29 and Murray is likely to be sentenced to up to four year in prison.

As Jackson fans celebrated on the streets outside the courtroom, the singer’s family spoke out about the guilty verdict.

“Thank you America, thank you everyone. Everybody was wonderful. Michael loves everybody. He was in that courtroom with us – that’s why justice was served,” La Toya Jackson said. 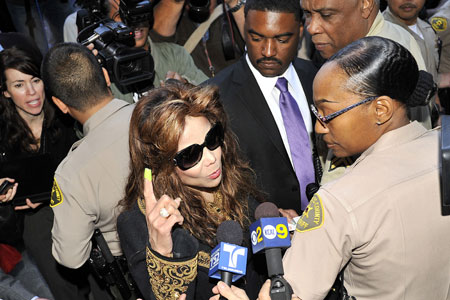 La Toya Jackson talks to the media outside the courtroom

“Justice was served, but it wasn’t enough time. Michael is with us,” Jermaine told waiting reporters.

“Dr Murray has been found guilty, clearly he’s not a smooth criminal,” read one tweet.

“Dr Murray had no chance! Feel injustice has been done! If it was not Jacko trial then it may have been a different outcome!” said another. 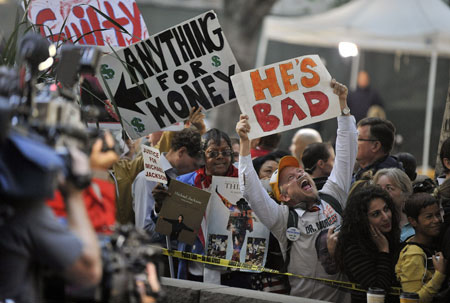 And: “Dr Murray is carrying the weight of ALL of Michael’s enablers over the years. Including his family.”

Michael Jackson’s doctor Conrad Murray has been found guilty of involuntary manslaughter for administering a lethal dose of propofol to the singer. He is currently on suicide watch in a county jail.

Do you think justice has been served?