Morocco – the souks of Marrakesh to the Sahara desert

It’s desert war. My sheet slaps me in the face, my eyes begin to sting and the rest of my bedding gets chucked around me. Groping for my torch, I surrender to the sand and wind, and drag my mattress back to the protection of the tents.

Sleeping on top of a sand dune under the stars and moon seemed like the perfect way to round off a memorable day in the desert. But to get any rest, I have to be content to drowse off to the sound of camel grunts in the shelter of the Berber camp.

I wake up to stillness, no sign of the buffeting wind of the night. Dragging myself up a dune, I rub my eyes and have to tell myself, that yes, I really am watching the sun rise above the red dunes of the Sahara. 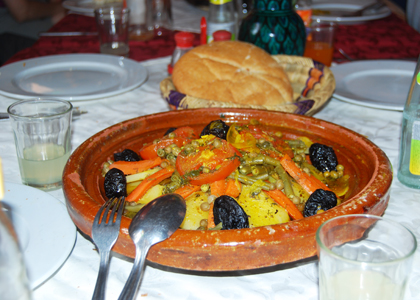 We’ve journeyed for three days from Marrakesh, our minivan going up into the High Atlas mountains, down into palm-lined valley oases, through villages where children stare at us camera-laden foreigners, and past abandoned kasbahs and buzzing markets selling prickly pears and watermelons. We stop along the way to refuel with mint tea and delicious tagines and refresh in cool hotel swimming pools.

When our modern-day caravan reaches Rissani, Morocco’s gateway to the Sahara, our travel weariness (much of it to do with the 40˚C heat) ebbs away as we realise how close we are to the desert.

Turbans at the ready, water bottles by our sides and cameras around our wrists, we meet our mode of desert transport. Lined up, blanketed and baring dirty gnashers, our camels groan as they heave us up, and slowly plod towards the dunes for our night at a Berber camp.

The Berbers were the original inhabitants of North Africa, a people who managed to hold on to their traditions and culture, despite the invasion of Arabs, Romans, Phoenicians and other tribes (and later countries) sent to conquer the tip of the continent. The majority of Berbers live in Morocco, and call themselves the Imazigen (free men), despite intermingling with Arabs and adopting Islam as their religion. And though many have moved to the cities, three main Berber groups in Morocco live in the Rif mountains, the Middle and High Atlas ranges, and the Sahara.

After a candlelit dinner, we are treated to entertainment by the fire, listening to Berber music – of drumming and soulful singing – until someone starts Buffalo Soldier and so begins a medley of Beatles, Bob Dylan and other ’60s hits. Even the desert can’t escape pop culture.

A few days later, we’re back in Marrakesh and our serene Sahara experience feels like a dream next to the crowded chaos of the city’s square, Djemaa El Fna, at dusk. As we make our way among henna artists, storytellers and snake charmers, we are met with dancers and monkey handlers, all pointing to our cameras chanting “photo, photo”, for a fee of course. 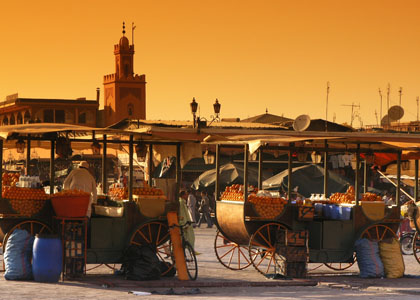 We dine at one of the pop-up stalls, with gas fires, cooks dressed from head to toe in white and waiters touting for business. Food ranges from brochettes (skewers of meat), salads and couscous to fish and snails, all washed down with freshly-squeezed orange juice.

Later, we sip on an overpriced soft drink, which we are forced to buy if we want to get a view of the madness from one of the rooftop restaurants above the square, and gaze below at the lights, smoke and milling people to a soundtrack of incessant drumming.

The next day, we try to recapture the peaceful night in the desert and after a session in Marrakesh’s souks, head for a relaxing hammam (traditional steam bath) and massage.

Any thought of a soothing experience is put aside as voluptuous topless women scrub away traces of the Sahara (including our tans), throw buckets of water over us and then instruct us to lie on our backs on concrete slabs as if we are sacrificial lambs while they lather black clay on our bodies. As we sweat it out in the sauna we’re not quite sure if this will really rejuvenate us or if “hammam” is a code word for torture for unsuspecting tourists.

But after a cooling shower and a cup of mint tea, we’re led into a darkened room and given a therapeutic massage with argan oil, used in Morocco for almost everything from cosmetics to cooking. I drift off, dreaming of camels and kasbahs, while outside Marrakesh sets up for another night of hectic activity.

Marrakesh to the desert – what to see along the way

Ait Ben Haddou
This ancient fortified village sits on a hill above Oued Mellah and is now a Unesco Heritage Site. Get lost among the dusty streets and crumbling kasbahs as you wind your way up the steps to the granary where you’ll get a view of the valley.

Ourzazate
Nicknamed the Hollywood of Morocco, this town has become a favourite with the international film industry. Take a tour of the Atlas Corporation studios, which has been a Jewish market place (Passion of the Christ), Tibetan temple (Kundun) and Roman jail (Gladiator).

Todra Gorge
The soaring rock face of Todra Gorge makes a rugged contrast to the lush green landscape and waving villagers en route. It’s a popular spot for locals to hang out in the cool of the evening, so watch your back for oncoming motorbikes and mules if you walk through the canyon at its narrowest point, surrounded by 300m high cliffs. 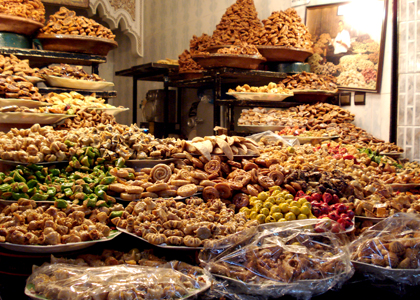 The souks of Marrkesh

Marrakesh’s souks, which are located behind Djemaa El Fna, are a riot of spices, bright fabric and interior accessories. Here’s what you need to know before you shop:

WHEN TO GO: Summer (June-August) temperatures can be sweltering. Winters are generally mild, but pack warm clothes for a night in the desert.
GETTING THERE: EasyJet (easyjet.com) has direct flights from London Gatwick to Marrakesh.
GETTING AROUND: Marrakesh can be seen on foot, though taxis are cheap if you get tired. To reach the Sahara, it’s best to join a tour.
VISAS: South Africans need a visa, Aussies and Kiwis don’t.
CURRENCY: Dirham. 1 GBP = 12 MAD.
LANGUAGE: Arabic, though most Moroccans also speak French.
GOING OUT: Morocco is a Muslim country, so alcohol is not easy to obtain. A beer is about £2.50.
ACCOMMODATION: Hotels in Marrakesh’s Medina are generally good value. A double starts from about £45.
GET MORE INFO AT: visitmorocco.com.

» Janine Jorgensen travelled on the eight-day Marrakesh & Beyond tour with On the Go [020 7371 1113; onthegotours.com/morocco] who offer a comprehensive range of year-round group tours and trekking trips from eight to 15 days. Prices start at £319 and all tours are led by fully-qualified local guides.