My cheese will go on: Headbanging at the Cooper’s Hill Cheese Roll

No photo you might have seen is able to do justice to the literal sinking feeling you get standing on the lip of Cooper’s Hill. The top of the hill is more like the cliff edge of a plateau, dropping away at a vertiginous angle, pitted with gullies and surprise hollows all waiting to grab at a miss-placed ankle.

Even climbing up the slope is an exercise in mud skating and grappling at tufts of grass. Going down looks suicidal.

Yet already the hill is filling with locals and tourists tenaciously clinging to either side of the racing slope. Off in the distance you can see ant trails of people making their way across the field from the little one-pub town of Brockworth beyond.

If you’ve not heard of the Cheese Roll, the premise is as simple as it is bewildering. There are four official races (three men’s and one women’s) in which a nine-pound wheel of Double Gloucester Cheese is rolled off the top of Cooper’s Hill followed by a tumbling mass of racers aiming to be the first one to the bottom. The winner takes home the cheese.

The last race is quickly followed by a free-for-all run. It is incredible to see hundreds of people bouncing and flipping like so many ragdolls, on their way to a sudden muddy stop at the bottom.

Not only do you risk yourself on the hill; the local rugby club is employed to form a solid wall at the foot of the hill, with a not-so-sympathetic shoulder to stop your careening trajectory.

Yet despite being documented as far back as the early 1800s – with several locals enthusing that it’s an 800-year old practice – the Coopers Hill Cheese Roll is no stranger to modern controversy. In fact it remains a semi-illegal act. Following the 2009 event, when 15,000 people were reported to have been on the hill, the cheese-rolling was officially cancelled due to mounting pressure from police and local council.

But the English are a stubborn bunch and the locals were not going to have their century old tradition stamped out by the self-appointed ‘safety brigade’. Since 2010 the event has run unofficially, taking place on the late May Bank Holiday, much to the chagrin of local kill-joys and ambulance staff. 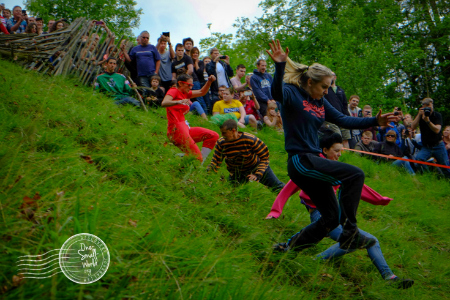 Though unable to stop the event from taking place, this year the police and council enacted an extensive road closure around the hill, meaning that anyone attending the event had to hike two miles across field and farm to get there.

Not satisfied with this measure, in recent years the police have even gone so far as to tell the 86-year-old woman who hand-makes the cheeses used for the event, that she was not allowed to sell them or would else be liable for anything that happened on the hill. Threatening an old lady, poor form guys.

Talk to the locals about the attempts to shut the roll down and you’ll be met with their local mantra: ‘The cheese will always roll’. And this year an estimated 5,000 people turned up on the day.

Rather than cripple the event, the council’s measures have only succeeded in working in the locals’ favour. Attendance numbers have dropped by two-thirds, returning it to the more locally focused event that it has been for hundreds of years. And just when it was at risk of being swamped by its own popularity.

Several of the locals I spoke to lamented the fact that in the years up to the ban in 2009 there were so many people that locals were missing out on the chance to compete in their own tradition.  They happily curse the measures taken by the police and then applaud the outcome with the same breath.

Despite the fortunate drop in attendance, the Gloucestershire Cheese Rolling still attracts people from all over the world. Predictably there is a strong contingent of Australians, a smattering of North Americans and even a squad of Japanese whose leader, dressed like a ninja, won a cheese last year and has flown back to England for a few days in order to defend his title.

All told, the injuries were surprisingly minor. One broken leg, a broken ankle, a dislocated shoulder, a suspected broken wrist, numerous serious concussions and a broken neck (though she was released from hospital soon after and says she can’t wait for next year’s rolling!)

Where: Cooper’s Hill near Brockworth, Gloucestershire

When: Late May Bank Holiday

How much: Just the cost of your health insurance

Why: It’s surreal, it’s sometimes sickening to watch and it’s not for the faint of heart

As close as to heaven I will ever get!