Hollywood couldn’t recreate anything this good. I’m walking through a real-life Jurassic Park, where ancient tropical rainforest has been flourishing for more than 100 million years.

It’s misty and dark inside, with just a few spears of sunlight piercing through the bright green canopy. Ferns the size of trees, dangling vines and larger-than-life palm leaves choke the trail, and I can’t shake the feeling that a bloodthirsty raptor may be lurking in the thick of it all.

It’s not hard to let your imagination run wild in Daintree National Park. Not only is the landscape of this pristine chunk of land totally out of this world, but it’s also the oldest rainforest on the globe, four times older than the Amazon. This dense forest is home to many ancient tree species, including the king fern and the idiospermum, a plant which was thought to be extinct for millions of years until it was recently re-discovered by a farmer.

Even more interesting, dinosaur fossils recovered here are among the earliest ever found, having lived in the Triassic period when Australia was still connected to the supercontinent called Pangaea. But 55 million years ago, the continent split up and the piece we now know as Australia drifted south to warmer climes. Although most of the dinosaurs are gone, the cassowary – a two-metre tall, colourful bird that even walks like a dinosaur – has managed to survive. 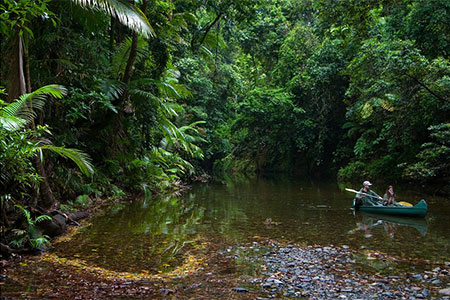 They are endangered, however, and road signs in the park warn drivers to slow down in areas where the birds are spotted. Crossing the Daintree River, you’ll also see signs warning tourists about one of Australia’s most fearsome predators, the saltwater crocodile. Did you know “salties” haven’t evolved biologically since they shared the land with the dinosaurs?

We stayed overnight in Cape Tribulation, 36km north of the Daintree River in the national park. For those of you who like to get away from it all, the beaches around here are long, deserted, white stretches of land with little sign of human intervention. There are loads of great walks too, horse riding tours, ocean kayaking, fishing and mountain bike hire. 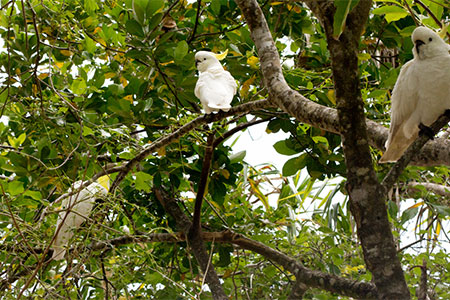 Covered in rainforest, Fitzroy is surrounded with coral and is just a short boat ride from the Great Barrier Reef. It’s the perfect place to do some snorkelling, try a beginner’s dive, complete your three-day PADI course, or take a scenic boat tour.

If you’re looking for a high-speed adventure, take a ride on Thunderbolt, an inflatable speedboat that zips you out to the reef in just 22 minutes, travelling at 80km/h.

Screaming across the choppy water, we breathlessly arrived at the outer reef, ready for a spot of snorkelling. The water was impeccably clear and just below the surface lay a bounty of clown fish, gropers, parrot fish and huge oysters. I even saw a reef shark swimming just a couple of metres ahead, but it didn’t stick around long enough for me to snap a photo.

After a morning of chasing colourful fishies around, it was time for the divers to get geared up. Three people on our tour also opted for the beginner’s dive, and off the lot of us went towards a new dive site just off the shore of Fitzroy. Meanwhile, sea kayakers skirted around our boat, making their way around the circumference of the island.

The next morning, we were up at 6am to hike to the summit of the island. A steep service road leads to a lighthouse on the northeast side of the island, which takes about half an hour to climb. From this point, there’s another leg-burning 1.5km trail up to the summit, where you can sit back and soak in panoramic views of the Great Barrier Reef and the emerald green water.

If that isn’t enough to keep you busy on Fitzroy, there’s also fishing, sailing, glass bottom boat tours and an inflatable ocean trampoline. And when this all gets too much, simply kick back with a fruity cocktail around the pool. Fitzroy can be as action-packed, or as chilled, as you want it to be. 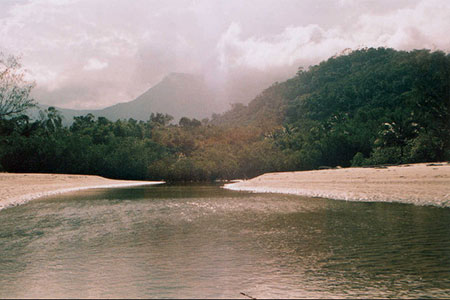 Alright. As much as I envisage myself as an intrepid traveller – heading off the trodden path in search of an authentic Aussie experience – I’m actually just a big city girl at heart. It’s not like I drag my hair dryer and 5kg makeup bag around the world with me, but I do think I can be a bit of a princess when it comes to home comforts. Running water, electricity, hot meals – that’s all I ask.

And that’s one of the reasons I love Cape Tribulation. It has this mystique of being a remote, untouched Nirvana (and in many ways it still is) while still offering the necessities.

While your mates back home reckon you must have embarked on a journey into virtually unexplored wilderness (“oh my, how brave…”), you’re actually spending your days exploring endless, near-deserted beaches, their sparkling sands crowned on one side with palm-fringed rainforest and glistening ocean on the other.

Enough people know about Cape Trib by now to disqualify it from that “next big thing” competition, but not so many that it’s become too commercial or touristy. There may be a sealed road in, but from here to Cape York, it’s still dirt all the way.

There are no street lights, but that doesn’t matter, because the sky is filled with stars which, like millions of pin-pricks through a blanket of darkness, are enough to guide you home. You can still wander though virgin rainforest, feeling a thousand miles from civilisation.

The journey up the Cape was long but by no means arduous, with jaw-dropping scenery – azure skies touching aquamarine ocean on one side, and lush tropical greenery on the other.

If you do fancy indulging in something a little more energetic than lazing on the beach, there are plenty of activities on offer – horse riding on the beach, croc-cruising, kayaking in the clear waters and boozing are all popular diversions, plus more excellent bushwalks than you can shake a stick at.

I think I had caught jungle fever. Against my better instincts I fancied a turn at being Jungle Jane– I signed up for a canopy tour. Vines festooned the maze of trunks like the silly string aftermath of some monster party.

Faster than you could say “Holy shit, Batman!” I was swinging, superhero-style 60 metres above the forest floor, and despite it being brown trousers time, the view was pretty special. When I eventually managed to unglue my eyes and glance around, I had a bird’s eye view of the Cape that beat any crow’s nest.

Steam rose off the forested slopes of Mount Sorrow in the distance (hereby renamed Mount Fun, as old Cookie clearly wasn’t in the mood to be naming things). Trees stretched to the horizon in every direction, a sight unchanged for centuries.

I enjoyed my adventure in the canopy, but the highlight of today was (weirdly) sampling some bushtucker and effectively giving an ant a rim job to taste its acrid citrussy goodness. Mmm, sharp. 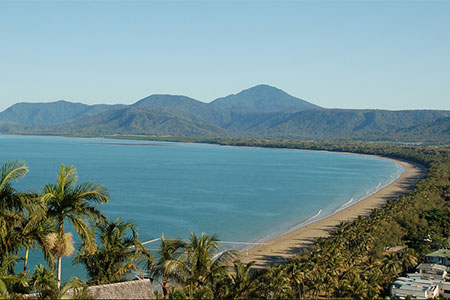 Oh dahhhling, this caviar is simply divine. Could you top up my champagne? Cue popping and fizzing sound effects as bubbly splashes into a glass… Oh, c’est magnifique!

So it may not sound like the daily life of a backpacker, but in the town of Port Douglas, you’ll be mingling with the rich and famous. This is the holiday destination where A-listers “in the know” come to relax, not to mention a couple of ex-US presidents.

About an hour’s drive north of the backpacker mosh-fest that is Cairns, this is a town where “nothing is taller than a palm tree”. The point is that Port Douglas is not an over-developed skyscraper celebration. “Port” is coming of age as a backpacker hangout as Cairns’ crazy scene becomes a little too much for the more mellow traveller.

Closer to the reef than its more famous neighbour, the people of Port Douglas will boast that their town still has a small village atmosphere. Otherwise, it has many of the same attractions: you can learn to dive here, you can go snorkelling, swim at the town’s beaches or hang out at the pretty Low Isles, you can take bush walks around the town, do daytrips up to the Mossman Gorge and perhaps best of all, it’s within half an hour’s drive of the Daintree, a mouthwatering rainforest paradise.

Port Douglas sits on Four Mile Beach, a five-minute walk from most budget accommodation in town and safe for swimming year-round due to stinger nets. Port has the closest access to the outer reef in Queensland, with many tours taking you out to Agincourt Reef, where you can see millions of different tropical fish and coral formations, whether snorkelling or diving in amongst them.

I love it here – it’s definitely my type of place. I want to stay. I’m looking for a sugar daddy to put me up in a mansion and serve me champers and caviar every morning. Any takers?

London 2012 Olympics: Businesses should give staff longer breaks during Games