This is a scene that would be commonplace in any pub any night of the week. But it’s only 8am. Already the masses are congregating outside Munich’s Löwenbräu tent, ready to indulge in another solid day ?of beer drinking.

Hours earlier, on the coach on the way to the festival, our Busabout tour leader Damo ?explains what lies in store when we hit ?the grounds.

“Today we’ll be drinking beer and dancing on tables – then drinking more beer,” he said. He then teaches us useful German phrases which we weave into a drinking song, complete ?with dance moves so we can join in with the locals when ?they start crooning in the tent.

Luckily, the lyrics are printed on the backs of our T-shirts ?in case we forget the words, which is likely once the beer starts flowing. 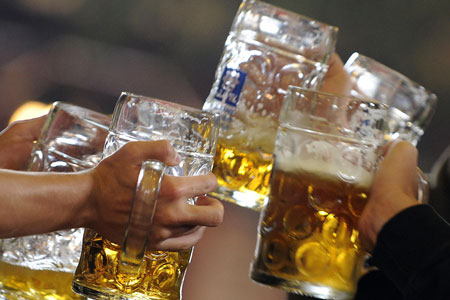 Back in the queue, packed in like sardines, we squeeze our way through the legendary ‘Tunnel of Desire’ with its signature 4.5-metre-tall lion towering above, before finally reaching the entrance to the beer hall.

Our pilgrim journey is not yet over. In fact, it’s only now that the real pursuit begins: the quest for a seat.

Here at Oktoberfest, getting your bum on one of the sought-after wooden benches is the first and most essential step of getting a stein – if you don’t, you won’t get served. The good news is that once you’ve found a seat, you’re sorted for the rest of the day and can focus on the task at hand: downing, singing and dancing.

That’s it, we all know we’re heading for public disgrace. Our drinks and grub are brought to us by buxom Bavarian dirndl-clad barmaids, so we don’t need to leave our seats.

Strong like bulls, these ladies can shuttle staggering amounts of beer to the tables (the Guinness World Record is 19 steins). Later, my hands ache at the end of ?the day – just from holding on to my ?one-litre mug.

My friends and I look the part – dressed in traditional lederhosen and dirndls – as more visitors embrace the fashions once the preserve of the staff. Although I’m sure the lads are pleased, as most of the women are scantily clad in revealing low-cut tops ?and hitched-up skirts.

Beer is served from 9am on weekends and 10am on weekdays. It’s a tad earlier than I normally crack open my first drink of the day, but I soon get caught up in the raucous atmosphere of the festival, often referred to as ‘Disneyland for drinkers’.

A stein or two later, and with the help of an energetic oompah band, the party is in full swing. As the hours go ?by, the party gets louder, wilder and more boisterous.

Revellers dance on the tables while singing along to traditional German drinking songs as well as pop and rock anthems from the likes of Queen and The Killers. This is the perfect way to experience German Gemütlichkeit (friendly ambience) first hand. 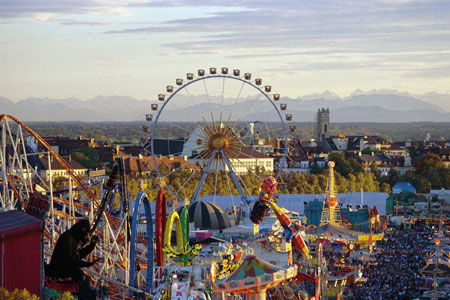 With more than six million people attending, it’s impossible to imagine this 211-year-old event initially ?started out as a celebration of the nuptials of Crown Prince Ludwig and his bride, Princess Therese.

The party officially kicks off at noon on the first day of the festival (September 17 in 2011) when the lord mayor taps the first keg of beer and cries: “O’ zapft is” (“It’s tapped”). ?Only then can visitors quench their thirst.
There are 14 large tents and 20 smaller ones from which to choose.

Each one has its own character, ranging from the funky celebrity-packed Hippodrom and the youthful Löwenbräu to the displays of yodelling in the Braeurosl ?and traditional roasting oxen in the Ochsenbraterei.

We opt for the Löwenbräu, also a meeting point for the fans of the TSV 1860 Munich soccer team of the same name. There are 5700 seats inside and 2800 in the beer garden. The largest one is the Hofbräu-Festzelt, which has a capacity of nearly 10,000 people.

With thousands of drinkers in one room, fuelled with an endless amount of beer, there’s bound to be some anger issues and temper tantrums.

I’m surprised, however, as most people are well behaved. Just as I think this, a giant gingerbread heart gets launched into the air by an enraged reveller after he got into an argument with one of the girls in our group.

I had never thought of these baked delicacies as forceful weapons until this jumbo version hits me on the head, knocking me into the girl standing next to me, causing both of us to topple like bowling pins. 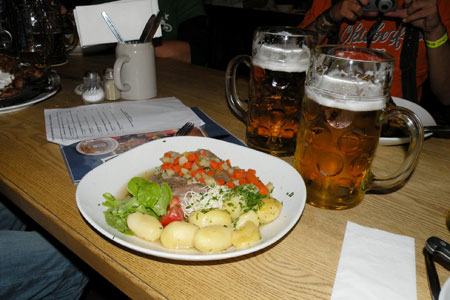 A broken heart, and a few tears later, and we are back in drinking mode. I look over at my husband who’s slumped against a table. It’s only noon but, in hindsight, he did knock back the beers a little faster than everyone else. What he should have known is this is marathon drinking, not a sprint.

After a short powernap, he catches a second wind and knocks back another four steins, which is the equivalent of what I drink in one day. We attempt to explore this mammoth festival – and aim to visit each of the 14 beer halls, festival houses and Schnapps stalls but fail miserably.

However, it’s not only the amber brew that is tempting today’s Oktoberfest visitors. The beer tents are surrounded by ?a large fairground with tonnes of rides – rollercoasters, bumper cars, carousels and fairground games, so there’s plenty to keep you entertained.

In fact, not only will you be entertained, this will most likely be the biggest – and best – party you’ll ever attend. So put on your drinking boots (along with a pair of lederhosen or ?a dirndl), and let the fun begin. Prost!

Although all the hype is about Oktoberfest, for a more authentic, less touristy experience, head to Volksfest ?in Stuttgart.

With more than three million visitors every year, the event ?is widely recognised as the second biggest beer-swilling fiesta ?in the world (after Munich’s Oktoberfest).

It’s no secret that Germans like to party. However, the origins of Volksfest stem from a more serious matter – the massive eruption of Indonesian volcano Tambora in 1815.

The disaster led to climate changes and severe famine in Europe as farmers were unable to grow their crops. When things finally returned to normal, King Wilhelm I of Württemberg and his wife Katharina decided to celebrate the harvest with an agricultural carnival in 1818.

The emblem of the Cannstatter Volksfest is a 26-metre-tall fruit column, which stands in the middle of the festival site, symbolising the festival’s agricultural beginnings. 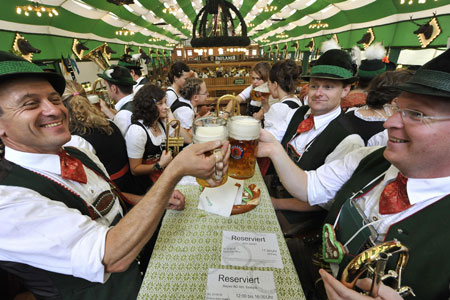 Inger Smith travelled to Oktoberfest with Busabout, which runs four- to- seven-day trips to the festival. All trips include guided excursions and the services of Busabout Festival Team. Busabout offers camping packages from £139pp and hostel options from £249pp. Packages including coach transport from London from £359pp

in Brazil, model Nana Gouvêa has become the latest target of photoshop satire memery after photos of her posing next to fallen trees in the disaster-stricken streets of New York City (shown, top row) came off as rather distasteful to many Brazilians on Fa