The fires in NSW have left one man dead and hundreds of homes feared destroyed, while emergency services warn there may be worse news to come.

More than 1500 firefighters were on the ground across the state on Friday as more than 90 fires scorched through 91,000 hectares and destroyed at least 80 homes.

A 63-year-old man collapsed from a heart attack while defending his house at Lake Munmorah on the NSW central coast on Thursday – marking the first fatality in the crisis.

Walter Linder, pictured below, died in his yard and despite attempts to revive him, died at Wyong Hospital. 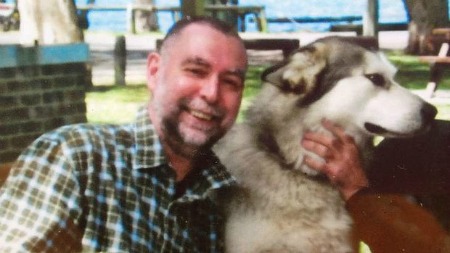 “There is a possibility that we might find people who haven’t been able to get out of harm’s way,” he told reporters.

The fires, he said, were some of the most damaging and destructive the state has ever seen.

Mr Fitzsimmons became visibly emotional as he addressed the media, stopping to compose himself as he praised the work of his colleagues.

“We have the best firefighters in the world,” he said.

But for some people’s homes, the ferocity of the fires were too great.

Eighty-one properties are confirmed to have been destroyed and 37 damaged by blazes in the Blue Mountains communities of Springwood and Winmalee.

But with only 30 per cent of the area so far being inspected, the RFS expects the numbers to rise.

One local, Helen Walton, who has lived through three major bushfires since moving to the mountains said the fire – which scorched almost 2000 hectares – was by far the worst she had seen.

But her house remains, and she vows to as well.

“We’ll stay. Of course we’ll stay. We might have to re-landscape, though,” she told AAP.

Springwood resident Catherine Hubbard made a terrifying escape from the bushfire that destroyed her home, seeking refuge with strangers. 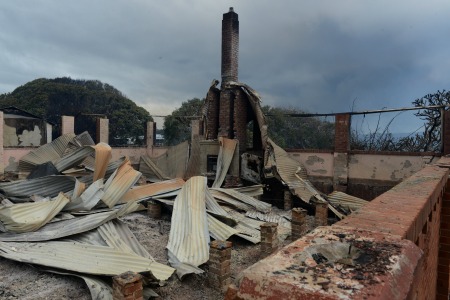 “The sun was totally blocked out and houses were burning down to the ground all around us,” she said.

Without running water, the neighbours used buckets and wet towels – “whatever we could get our hands on” – to douse embers, knowing the house was their only refuge.

Then came a change in the wind which cleared a path through the smoke.

“It was a miracle, actually,” Ms Hubbard said.

While the Blue Mountains was the worst hit region, residents of Lithgow, the Southern Highlands and the central coast also faced another tough day as blazes flared up across the state, with the fire in Balmoral running rapidly.

“It looks very apocalyptic … It looks horrible with telephone poles burned to the ground and things just destroyed.”

Two firefighters are in hospital with burns and a Winmalee man is being treated for smoke inhalation.
But there was some good news on Friday night, with all blazes downgraded to a watch and act alert or below as humidity rises and winds drop.
Firefighters were strengthening containment lines and getting out of control blazes in check before worsening weather conditions on Sunday and Monday.

“The fight will continue night and day for days and, on some fire grounds, for weeks,” he said.

Prime Minister Tony Abbott, an RFS volunteer himself, thanked those working on the NSW emergency.

“I just want to say how sorry we are on behalf of the people and the parliament of Australia for the heartache which so many hundreds of people in NSW are currently dealing with, but how proud we are of the thousands of volunteers and full-time professionals (fire fighters),” he said at Winmalee fire station.