The Oscars 2011 are nearly upon us (Sunday Feb 27, 2011) and anticipation is rising. If your nails are nearly bitten to the quick then read on for our list of who will (probably) win an Oscar in 2011 and who we reckon should really win!

Actor in a leading role

Colin Firth for The King’s Speech. Well, he deserves it after narrowly missing out last year for A Single Man.

Actor in a supporting role

If The King’s Speech fever has infected the Academy then Geoffrey Rush could win. If not, it will be Christian Bale for playing a walking cadaver with a crack habit in The Fighter. (Is that too patronising? Will Bale come and piss on my shoes?)

Mark Ruffalo for his endearing turn as a sweet, dopey sperm donor who meets his grown-up sprogs and attempts to turn Julianne Moore’s lesbian character straight in The Kids Are All Right.

Actress in a leading role

Natalie Portman for Black Swan. It just seems to be her time. And we’re not talking about the fact she’s about to give birth. (She’ll be as big as a whale on the red carpet – did she not consider this when she decided to get preggers!?)

Actress in a supporting role

Melissa Leo for The Fighter or 14-year-old Hailee Steinfeld (True Grit) for that let’s-give-the-kid-an-Oscar buzz the Academy likes to create once in a while. But, geez, it could be any of them except Jacki Weaver for Animal Kingdom because as far as the Academy is concerned she’s a frumpy Aussie nobody with no previous US form.

Jacki Weaver for Animal Kingdom, because she’s a frumpy Aussie nobody with no previous US form. Come on, Academy – it’s only taken her 48 years to get here! And we should also point out that the 63-year-old veteran actress is quietly, chillingly brilliant as crime matriarch Smurf Cody.

David Fincher for The Social Network. He did well to take a subject as dry as a dead dingo’s donger (coding, computer geeks, Mark Zuckerberg, sheesh!) and turn it into a drama of Shakespearean proportions. 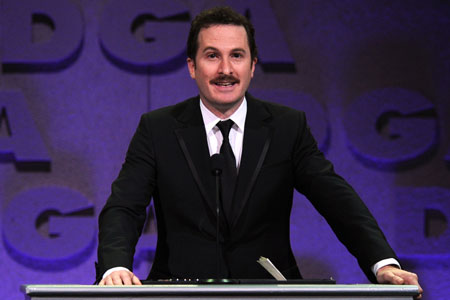 Fincher deserves it but it would also be gratifying to see a director as leftfield as Darren Aronofsky, whose previous films include the nightmarish, druggy Requiem For A Dream, take the big one for his hysterical psych-thriller Black Swan.

Biutiful, because it’s got hunky Javier Bardem in it who everyone knows from Vicky Cristina Barcelona and No Country For Old Men. (And don’t he and Penelope Cruz make a “biutiful” couple? Arf!)

Dogtooth. This Greek film is one of the most unsettling, affecting bits of celluloid you’re likely to see all year. About a family cut off from the outside world by their Josef Fritzl-style father it is allegorical on so many levels it will make your head hurt – in a good way. It won’t win but it damn well should.

The Social Network is likely to beat The King’s Speech, but only just.

God only knows why this category has been expanded to ten films when half of them don’t stand snowball’s chance in hell of winning. Does the Academy think that just getting an Oscar nomination is enough? Tell that to Peter O’Toole (Note: honorary Oscars don’t count). With that in mind, 127 Hours has no real chance of winning (too gory) nor does Winter’s Bone (too edgy) but it would be an upset-and-a-half if one of them did.