Waving placards with slogans such as  “Miss Deed” and “Miss Ogynist”, the groups’ smessage was that the pageant had no place in 2011 society.

“You can’t pull the wool over young women’s eyes,”  Mordan said. “They’re living and growing up in a culture that sees pornography as increasingly mainstream. This is the soft end of that, reducing women down to the sum of their parts.”

“Appreciating beauty should not cause anger,” Coleman said.

“Women enter beauty pageants at their own will, they are not forced into it I don’t understand why feminists think it is degrading, as pageants are actually empowering women. Ask any of the contestants. 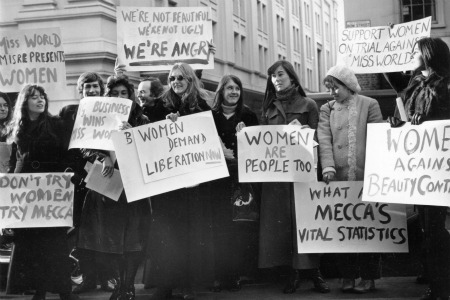 Protesters at Miss World back in 1970 (Getty Images)

And Miss England director Angie Beasley said the contest “had changed with the times” and was no longer just about looking good in swimwear.

She said:”Yes they have to look great to win but it’s so much more than a beauty contest. These people should give it a chance instead of thinking it’s just a bikini parade.

“We live in a free society where women have the right to choose. The contestants in Miss World are quite capable of making up their own minds if they want to enter or not and protesters shouldn’t keep criticising the same decision. If you don’t like it, don’t watch it.”

Ivian Sarcos, a 21 year-old from Venezuela, was crowned 2011 Miss World.

10% off ALL Tigerair’s domestic flights across Australia!

Get fit with Lilly Sabri in Victoria