In celebration of the eccentric world of British culture and, of course, old Lizzy Windsor, Battersea’s Diamond Jubilee Festival will feature artists, designers, chefs, bakers and revellers for a daytime Thameside party, curated by the Vintage Festival’s Wayne Hemingway and artist Clare Patey. It’s going to be a top spot to watch the Queen’s river pageant go by.

Norman Jay & The Good Times Sound System will provide the tunes, with ex-Hacienda DJ Graeme Park
as a special guest. They’ll be rolling out the best beats from throughout the Queen’s reign atop a red open-deck bus.

Does Jay think the Queen would approve? “Well, she approved once, she gave me an MBE, so I’m sure the grandsons will be fine,” he says. “If they wish to get off the barges, they’re always welcome on our bus!”

And even if the two princes decide not to take up the offers, there’ll be tons of other entertainment. Carters Steam Fair will provide the rides, the Alternative Village Fete will be there to offer some quaint British stalls and the WI will be baking cakes.

There’s also The Diamond Geezer, a pop-up boozer, if you’re after a cockney knees-up. Musical Bingo and Queens of Noize will both make an appearance there.

You can dance your socks off at the festival’s main stage where you can catch the Noisettes, The Selecter, Angelos Epithemiou and more, or hit the bandstand and spend a little time with either Paul Taylor’s Vintage Tea Dance Orchestra or The Bomshelettes. 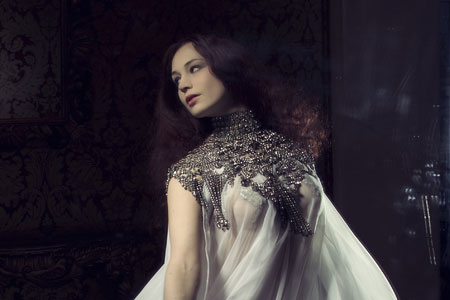 Sick of the Liz stuff?
Check out the Alternative Diamond Jubilee at the Museum of London Docklands. A specialist in the historical alternative night out, the museum has decided to step back into the brilliant and bizarre world of the Victorians.

But why? Events officer Jenny Bull says she wanted to be a bit different. “Because it’s at the Docklands Museum, the collections and the buildings really suit a Victorian theme,” she says. “We’ve got a Victorian steampunk, chap hop rapper coming in called Professor Elemental, as well as burlesque shows and illusionists in another room. We’ve also got Queen Victoria coming along – well, someone dressing up as her.”

Burlesque dancer Vicky Butterfly pictured above) will be showcasing her theatrical moves, and there’ll also be talks on both Victorian fashion and the father of modern bodybuilding, strongman Eugen Sandow.

Craft fans can keep busy at a coronation souvenir workshop. And all this can be done with a drink in hand from the bar.
If you’re heading over, make sure you look the part – the dress code is fin de siecle finery and steampunk chic (think a mix of sci-fi and gothic).