Ahead of the royal wedding tomorrow, Prince William and Kate Middleton held a rehearsal in Westminster Abbey, along with Prince Harry, William’s best man, Kate Middleton’s parents, Michael and Carole, her sister and chief bridesmaid Pippa and her brother James.

Royal wedding rehearsals have been held elsewhere but this was William and Kate’s only chance to run through the service in Westminster Abbey itself.

The couple’s car was escorted by a convoy of police as crowds of people, already gathered for the big day tomorrow, tried to get a look at the bride-to-be on her way into the Abbey.

William and Kate were joined for the wedding run-through by all the churchmen involved in the ceremony, including the Archbishop of Canterbury, Dr Rowan Williams, who is marrying the couple.

Although the event was kept hidden from the public, during the rehearsal Kate will have practiced walking up the aisle with her father and making her vows with William.

A St James’s Palace spokesman said of the royal wedding practice-run: “The couple are attending a private wedding rehearsal at the abbey this evening.

“The rehearsal is for them and the clergy, and others taking part in the service, such as Prince Harry and the Middleton family.” 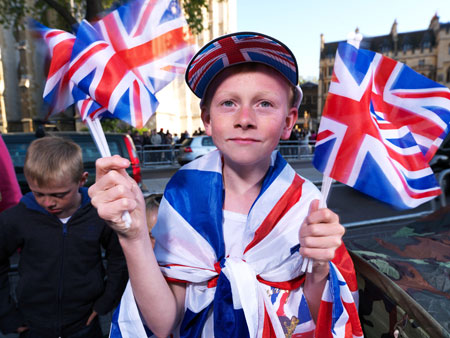 A young royal wedding fan gets into the spirit.

Kate Middleton wore a black jacket and a blue skirt to the church for the royal wedding rehearsal, while Prince William and Prince Harry both wore suits.

Kate has now left her parent’s house as a single women for the final time. Tonight, she will stay in the Goring Hotel in central London with her sister Pippa and parents, Michael and Carole.

Prince William will spend the night with his father and mother-in-law, Charles and Camilla, at Clarence House.

Prince William and Kate Middleton have lived together before. When asked about this, Dr John Sentamu, the Archbishop of York, said that times change and cohabiting before marriage has lost its stigma.

“We are living at a time where some people, as my daughter used to say, want to test whether the milk is good before they buy the cow,” Sentamu said.

And you can’t get more romantic than that!

All My Sons – theatre review