Rum Diaries: reef and rum on the Bundaberg Coast

Today was a first for me. Never before had I given pleasure to a turtle. Hang on a second, that came out wrong. It was all consensual I promise, so don’t go calling the bestiality police just yet.

I’m diving off Lady Elliot Island, a coral cay that lies 80km off the coast of Bundaberg. It’s a tiny island, the Great Barrier Reef’s most southerly, and is home to little more than an eco-resort and some of the best diving found Down Under, thanks in large part to being just about the most likely place in Queensland to spot turtles and manta rays.

I’d arrived on Lady Elliot earlier that day, my cosy 13-seater plane skidding to a halt on the grassy runway after the 25-minute flight from the mainland, to be greeted by the island’s waving staff.

As the Queensland sun beamed down on what is the Great Barrier Reef’s most isolated resort, I headed off to get my bearings, while behind me the several TV news crews that travelled with me jostled for position – it just so happens my visit coincided with that of the Swiss-made Turanor, the world’s largest solar-powered boat that is currently circumnavigating the globe.

Obviously, when wondering where to pull up for the night, the almost entirely solar-powered Lady Elliot eco resort was an easy choice for the Turanor. But I left the news hounds to their interviews and headed straight for what I had come for – the dive shop.

Lady Elliot is renowned for its spectacular diving for many reasons. For starters, there’s no stingers at any time of year. Plus, the proximity of the continental shelf means cold currents bring plenty of plankton to the area. They in turn draw in turtles to the region to feed, mate and then nest on the beaches (November to February), before hatching and scurrying back into the sea (January to April).

While Mon Repos, by Bundaberg, boasts the Southern Hemisphere’s largest nesting population of loggerhead turtles, Lady Elliot also enjoys an active season, with green and hawksbill turtles also in abundance. Plus, the island’s surrounding reef, which you can paddle to straight from the beach, enjoys a large manta ray population, which swells from a standard 50 or so, to several hundred during the winter mating season. Lady Elliot’s underwater world lives up to the hype with ease. The fish on display are breathtaking. Flashes of colour spark left and right as if beams of sunlight are creating underwater rainbows.

The real treasures, however, are amongst the numerous bummies which rise from the sand at sporadic intervals. In one we spy a majestic lionfish. It looks like a peacock preening its feathers as it sways in the current.

On top of another, a small hawksbill turtle is feeding, rolling over and under in the currents like a toddler in a playpen. A few minutes later, after passing a couple of green turtles swimming by on their daily commute, we come across a real treat – a large green turtle, almost 1.5m long, is relaxing on the seabed. Not wanting to disturb it from its slumber, we’re standoffish at first, until a few nods of its head beckon us closer.

Within moments I move nearer and give him a scratch on the back, as if I’m a cleaner fish removing the algae. He lolls his head in pleasure (I think?), and so I carry on. See, all very innocent.

Popping back up to the surface, it’s hard to disagree with my enthusiastic dive instructor Chris, who has been on Lady Elliot for three years having dived all along the reef. “I just love diving and here is the best I’ve ever known,” he says, “so this is the place for me.”

I spend the rest of my day doing the leisurely 45-minute stroll around the entire island and enjoying the divine sunset, which sends the lagoon a vivid lilac, perfectly silhouetting two distant walkers.

It’s then just back to the bar, which basks in the sky full of stars and the sound of the sea roaring over the reef. Days are quickly filled with wandering the island tracks, packed with birds and butterflies, plus snorkelling in the natural lagoon and eating. Lots of eating. 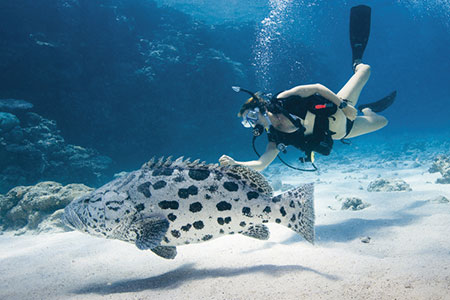 Sometimes you just need to get away from it all, even if you’re sort of already doing that by being in Australia, and it’s hard to imagine a place more perfect for achieving that. Like the turtles on the seabed, island life slows the urgency and soon the only deadlines that matter are whether you want to join the morning or afternoon dive (I discover too late that morning is better for mantas). And of course the sumptuous meals, you really don’t want to miss them.

There are so many fish on display it’s hard to keep track. Ornate butterfly fish, emperor angel fish and brass-striped barracuda are just the ones that I remember. One, however, that I will never forget is the final box I had to tick. A box that forced me back into the water just before my plane was due to leave – manta rays.

Tense at the prospect at leaving without seeing them (especially considering everyone else on the island seemed to have done), I paddled out to the reef. And bingo, there they were! Two giants floating and flapping playfully beneath me like something from another planet. It’s an incredible sight and I could do little more than gawp. A reef shark even siddled past like the added cherry on top. This time, the pleasure was all mine…

Back on the mainland, there’s plenty of accommodation options in Bundaberg’s wide and gracious main streets for any backpackers hunting down the region’s plentiful fruitpicking work (see next page), but I headed out to laidback beach village Bagara, about 15km through the sugar cane fields from town. Full of restaurants, hotels, a chilled-out esplanade and plenty more highly-regarded dive sites, it’s another great place to recharge the batteries. But I just had time to soak up one more site – Bundaberg’s main attraction (when the turtles are out of season) – the rum distillery.

It’s fair to say that Bundaberg Rum is about as Australian a drink as you can get. While most Aussies are fiercely regional about their beers, they unite as one when it comes to their Bundy and its iconic polar bear.

So much so in fact that the launch of a new white rum when I’m in town has had people camping out for 10 days. Forget iPad geeks, Bundy boys know the meaning of dedication. Distilled on the outskirts of town since 1888, when a certain Frederic William Buss decided to start using the local surplus of molasses, a byproduct of sugar production, the Bondstore now boasts a staggering 22m litres of rum on site at any one time.

A tour of the distillery is a great way to spend a few hours full of rich sugary smells, tales of towering infernos from when the distillery burnt down and the chance to admire giant barrels, each holding $6m worth of rum.

Not enough? Well, how often do you get to have your photo taken with a rum-drinking Queensland polar bear?

Has Sacha Baron Cohen been banned from the Oscars?

A scenic winter in the Blue Mountains