It’s a Monday morning and, opposed to the usual spot of tucked under my office desk, my legs are dangling over a drop of around 70 metres as I gently float through the air over the coast of Le Grande Motte in the south of France.

Feeling the fresh sea air on my face, looking out at a sun dappled horizon on one side and the long stretch of sand on the other, and hearing nothing but the speedboat below slicing through the water – the roar of its engine reduced to little more than a gentle murmur – I conclude that parasailing beats even a double-shot espresso when it comes to waking me up. And this is but the beginning.

With the next stop promising a thrill ride aboard ‘The Raptor’ powerboat, followed by an afternoon lunching on a catamaran, a gentle paddleboarding session on a lake and a not-so gentle hour of jet skiing, this day could convince even the Boomtown Rats that Mondays ain’t so bad.

With my feet safely back on terra firma, they are soon whisked from underneath me again after I board The Raptor. Besides wearing a wetsuit and a hooded poncho, the tidal waves that greet me slap-bang in the face everytime the super-speedboat spins or breaks, ensure that I end the ride soaked through regardless. Like a 20-minute-long rollercoaster ride on the water, I was ready to jack in my job right there and then and stamp my CV with ‘driver of The Raptor’, but after the driver tells me this is one of only a handful of powerboats of this kind in the world, and that he had to go through six months of intense training before he was allowed to drive it, I decide it is more fun to be a passenger anyway.

Lunch is a more civilised affair: after a walking tour of the harbour, I board a slick catamaran, which glides over the water like warmed butter on toast. Sitting back on the bow netting, I take in La Grande Motte’s coastline. In the 1960s, this area was little more than “sand and mosquitoes” tells Catherine Simon, head of promotions and communications at its tourist office. Local architect, Jean Balladur, was hired to design hotels to line the seafront and port in order to lure in tourists who were currently flocking to Spain. It worked.

Today, La Grande Motte’s population swells from around 10,000 to 80,000 during the summer months. The resort is not only unique thanks to Balladur’s penchant for circular windows, pyramid structures and primary colours – creating a town that looks like it could have been made with a child’s building blocks – but the watersports too are a huge draw. With good weather all year round – winter temperatures reach around 20°C (what the Brits call “summer”) – you can hit the waters in all seasons. Plus, you can bounce around the waves in open water off the coast, peacefully paddle in one of the lakes syphoned off from the sea, or simply weave through one of its harbours – a particularly impressive one being the nearby Port Camargue, where the healthy-of-pocket own a property where they can tether their yacht up at the bottom of their garden. 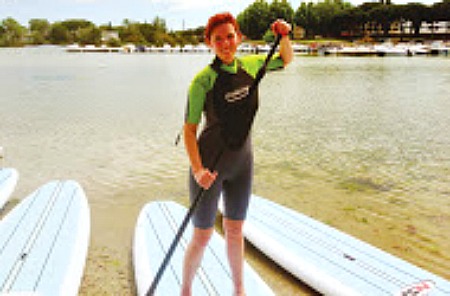 It is on one of the lakes, though, that I later find myself paddleboarding. A first-time stand-up paddler and a pro at falling over, I am prepared to spend a lot of time in the lake, rather than on it; however, I am surprised at how stabl ethe board is on the water. Larger than a surfboard, it’s easy enough to get started on my knees, and even when I have to jump up to my feet, both at the same time so I don’t lose balance, the board keeps me steady and buoyant. OK, I confess, I do fall in once, but that is because I can’t workout how to turn (N.B. Most of the instructors speak very little English. Either travel with someone who speaks French, or prepare to work with hand gestures). I panic as I head for a boat (albeit at around 5kmph), and end up toppling in. I was also getting pretty hot, so could pass it off as a refreshing dip.

Saving the best for last, we take a short drive to Le Graudu Roi to head out on jet skis. La Grande Motte does offer jetskiing, however we want to explore more of the area, and on reflection I would recommend you stay in La Grau du Roiand take a day trip to La Grande Motte instead, as Le Grau du Roi has bags of charm and a more rustic French vibe. With life surrounding the working harbour, locals mingle with visitors in the street cafés, shop in the open market and fish off the pier. After boarding our jet skis, and with a simple ‘this is the start button, this is the accelerator’ briefing (in French!), we chug steadily out of the harbour, following the instructor on his Batmobile-esque version of a jet ski. How he doesn’t take off I have no idea, as his machine apparently has 50% more power than mine, and I am crashing across the waves at 85kph – which, on water, feels like the speed of light. After my initial nerves evaporate, I turn into a complete speed demon, going full throttle as well as trying out donuts and flips (I’m kidding about the latter, I’ll save that for next time). 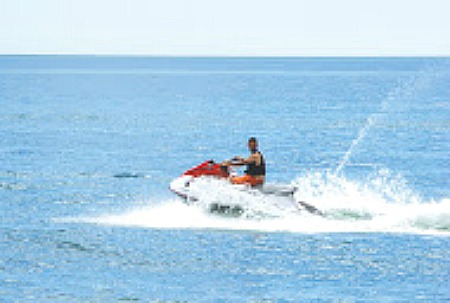 I can honestly say I’ve never had so much fun on the water, and we have such a huge stretch to play on – running alongside the Espiguette beach, which, at 9.6km, is one of Europe’s longest. We are out there for around an hour and I come back exhausted and exhilarated – and walking slightly peculiarly. Ready to pass out after a day of huge exhilaration, I decide that The Boomtown Rats should try doing watersports in the south of France the next time they get the Monday blues.

For more ideas on what to see and do in the south of France, visit en.destinationsuddefrance.com