I wish no ill to Hawk-Eye, the company entrusted with the close line calls in the Premier League next year. Nor am I opposed to the right decision being made when it comes to goals. What I am against is “the world game” losing the thing that sets it apart from every other professional code in the world – that a barefoot kid in an outer suburb of Timbuktu or a toffee-nosed twat from Chelsea can play the exact same game in the exact same way.

Football requires a ball, feet are helpful, and somewhere that can form a space between two goals. With the exception of retrospective suspensions if an incident isn’t dealt with on the field, what happens on a Premier League field this year is basically what happens between kids in Brazil or over-35s with a barbie on the sideline in Sydney. A bloke with a whistle does his best to keep things fair (his decisions will include ones that are right, wrong and debatable) and the team to score more goals wins.

Sure, England were screwed in the World Cup (see above image) but who complained at the Euros when Ukraine should have drawn not lost to Roy Hodgson’s men?

If we use technology to decide on the goal line, what about the six challenges in the air from any corner (any one could be a foul) or the 6.01 seconds the keeper may have spent with the ball before knocking it to the striker who may or may not have been in his own half when the ball was played?

I like the romantic notion that my nieces can play the same game as Lionel Messi, that you make your own luck, and that sport isn’t always fair, but we can sort it out at the pub afterwards.

And it’s not like Hawk-Eye doesn’t have a margin for error anyway. 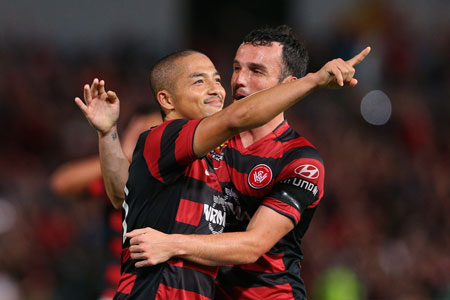 What a story! First time head coach’s first season team in the heartland of a code-war makes their first grand final.

You can’t write a story like the Western Sydney Wanderers, who beat the Brisbane Road 2-0 on Friday to go through to this week’s A-League grand final.

They’d already won their way to the Asian Champions League finishing on top of the table, but anyone who knows Australian sport knows that for some bizarre reason the last few weeks matter heaps more than the previous 20-odd.

Tony Popovic’s lads may have been assembled by the league to bring a derby to Australia’s biggest city and represent what is probably football’s heartland, but they’re the working class heroes of the league.

Their marquee isn’t an Italian international or former Premier League star, but Shinji Ono, a quietly spoken midfielder who was more or less unwanted in Japan – so of course he scored the clincher.