St Petersburg, Russia is hive of culture, shopping and nightlife. Here’s what happened when TNT’s Tom Sturrock went to visit.

Punters are invited to join a 10-piece band for a spot of karaoke.
The only problem is that, of an 80-page list of songs to choose from,
79 are devoted to local ‘classics’.

The Russian Standard vodka is flowing thick and fast – after a week
here, I’ve developed quite a taste for it. Alexei, the barman who’s
built like a horse on steroids, pours me another.

As the night wears on, the scene around the bar becomes increasingly
eccentric. Apparently, at 11pm, everyone has to put on a hat. Hitherto
concealed crash helmets and gas masks suddenly appear – the bar staff
are kind enough to lend me a jaunty KGB-style cap. It’s utterly
baffling.

Overlooking St Peterburg’s
main waterway is the Winter Palace, the eye-poppingly opulent residence
of the tsars. The palace now houses the Hermitage Museum, a gallery
overflowing with art and sculpture to rival anything in the West and
has been maintained in its glittering imperial style.

The
tsars entertained in the banquet halls of the palace, where, in
contrast to the otherwise plush surrounds, the corners would be stocked
with sawdust and feathers. The explanation is that guests would so
gorge themselves on gourmet treats that they would need to spew in the
corner before going back for seconds.

It may be less than 20 years since the Iron Curtain was drawn back
but designer brands have wasted no time. Around Kazanskaya Square, home
to the imposing Kazan Cathedral – a monolithic horseshoe the colour of
wet ash – shoppers scuttle past loaded with bags, mobile phones in
hand, hailing cabs and wheeling into the flash restaurants that line
the vast thoroughfare. Frankly, it’s more Mayfair or Manhattan than
Moscow. 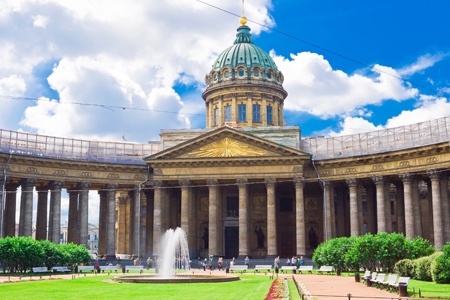 History: A city under siege

During World War II, Nazi Germany blockaded St Petersburg for almost
900 days, resulting in more casualties than any other military siege in
history. On Hitler’s orders, most palaces and other historic landmarks
outside the city’s defensive perimeter were looted and destroyed while,
inside the city, chaos and starvation reigned.

Civilians died on
the streets. People resorted to using sawdust to make bread and boiling
shoes for soup. After all the rats and birds had been eaten,
cannibalism became so widespread that the Leningrad police had to form
a special unit to combat it.

Finally, on January 27, 1944, the
siege came to an end. The fact that the city never fell remains a point
of intense pride in St Petersburg today.

WHEN TO GO: Don’t go in winter. You’ll freeze. The months on either side of summer are probably the best bet.
GETTING THERE: Most airlines fly to St Petersburg.
GETTING AROUND: St Petersburg has a metro system that is cheap and easy to use. You’ll need to buy one token per trip.
VISAS: All visitors need to apply for a Russian tourist visa, which can be a lengthy and tricky process.
CURRENCY: Russian rouble. 1 GBP = 40 RUR.
LANGUAGE: Russian.
GOING OUT:
A beer is 80-100 roubles. There are chain bars in the city that might
seem a bit touristy, but are more accessible and service-oriented.
ACCOMMODATION: You’ll pay 600 roubles for a hostel bed and about 2200 roubles for a private room. Hotels are expensive.
GET MORE INFO AT: petersburgcity.com

» Tom Sturrock travelled on the nine-day Russia Unplugged tour with On The Go (020 7371 1113; onthegotours.com/russia)
who offer a range of tours to Russia from four to 14 days, as well as
the Trans-Siberian railway journey from Moscow to Beijing. Prices start
at £389 and group tours are led by qualified local guides

Other traveller reviews on Italy

Ashes 2013: Clarke praises Aussie ‘character’ but says a big job ahead to get a win on the board

Hilary Mantel and Will Self on 2012 Booker Shortlist announced today