Stranger than fiction: Spend some time on the wacky but wonderful Sunshine Coast

“Off to play dinosaur golf, are you?” enquires the barista at the boarding gate café. Where the hell am I going, I wonder?

I’m tired, bewildered and, as of yet, decaffeinated. I’m about to embark on a three day assignment to the Sunshine Coast. I thought the region, which is made up of Caloundra, Mooloolaba, Coolum and Noosa sounded like a peaceful seaside town, the kind you’d find in a film. Porpoise Spit in Muriel’s Wedding, or Amity Island in Jaws (pre-bludgeoned children).

But when I mention the town of Coolum, my eager coffee maker is convinced I’m on route for a recreational adventure with creatures of the Jurassic-age. Normally I wouldn’t bite back, but I am intrigued.

“Clive Palmer?” suggests the barista. Yes, I say. “He built his very own dinosaur park at his Coolum resort and golf course.”

Ah, the fat mining magnate with more money than sense. I check my itinerary. No mention of cruising around in golf buggies chased by T-Rex.

I board the plane a little perplexed, but excited for what the south-east Queensland region will throw at me. 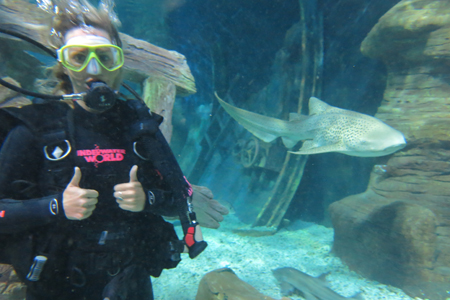 Prehistoric beasts of a different kind

My first port of call on the Sunshine Coast is UnderWater World Aquarium in Molloollaba where I am to go tête-à-tête with some sharks. No cage, just me in a tank with eight species of sharks, some stingrays and a heavy tank of air on my back for what is sure to be panicked breathing.

A lot of things run through your mind when you’re about to swim into a tank full of sharks and rays. You’re thinking about that documentary you watched about victims of shark attacks and how you don’t want to be the next member of Bite Club.

For some reason I am also thinking about the trainer at Sea World who was pulled to her death by an angry killer whale, even though there are no whales in sight. And I’m wishing I didn’t eat such a big breakfast at the airport. I wonder… if I vomit into my mouthpiece, where does it go?

But then I emerge into the aquarium tank and amazement takes over. The sharks glide past you, so chilled and cool, like a Cadillac on a summer’s day. You’re in their world but they don’t mind, they just roll on by, look you in the eye and think “yeah whatever”. I look up and a stingray floats above my head, hovering over me like a magic carpet. Then there’s the turtle, seemingly asleep on the ocean floor, looking like a big camouflaged rock.

I have to admit, the eight toothy sharks in the tank didn’t scare me, but the 250kg turtle floating towards me like a sloth at a free buffet did a little.

If you’ve never been intimate with sharks, or even scuba dived before, then OceanWorld is your big kids’ playground. Within an hour they have you trained in basic diving and pumped with equal measures of fear and excitement.

While you’re down there playing with the “Labradors of the sea”, as the guys call them, there is so much else to look at: the fish, the coral and, of course, the camera. This will most likely be the one and only time you’re swimming with sharks, and goddamit, you’ll make sure that camera is on you, waving it down with your awkward arm-not-stretched-out-too-much wave. As the pictures prove, my arms are stunted like a T-Rex’s. I look like I’m on the set of one of Clive Palmer’s wet dreams.

But that’s not all that the aquarium has to offer. After a year of refurbs, the place is looking rather fancy with Aztec artefacts in the tank, tunnels and tunnels of viewing pleasure, things to touch, and the good old fashioned seal show.

Although I am the only one sans family in tow, the show is a delight, especially for the star of the show, a one-eyed New Zealand fur seal (sounds like he should be in a Tarantino film) who is trained in Scooby-snacks to perform some pretty sweet aquatic tricks.

The term ‘animal husbandry’ has always made me feel a little uneasy but the good folks at the aquarium make you feel right at ease. You almost feel envious of these animals as they twist and turn, proudly performing on stage. The thespians of the sea. 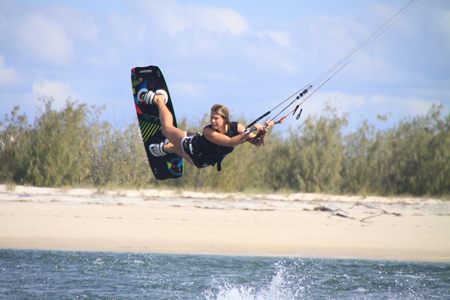 After a quick lunch at a nearby bakery, I move onto my next adventure – something that the Sunshine Coast is famous for – kite surfing. The area has produced some world-class kite surfers like the young Andy Yates, and while I’ve only got a couple of hours, Kite Surf Australia, based in Noosa, are going to give me a one-on-one lesson with one of their professional instructors.

The charismatic George tells me that he has kite surfed all around the world and Noosa is the best place to do it. Kite surfing combines the aspects of wakeboarding, windsurfing, surfing, paragliding and you could say, gymnastics into one extreme sport.

He has taught everyone from backpackers to Richard Branson and reckons anyone, of any age, can do it. The biggest misconception is in thinking that you need a lot of strength in your arms. You don’t – it’s all in the hips. The harness is strapped to your waist and the kite literally drags you along from your centre of gravity.

The biggest challenge, in fact, is “driving” the kite. My natural reaction is the turn the ropes like a steering wheel. “It’s not like driving a car,” explains George. “It’s more like riding a bike.” A-ha, now I get it! I tilt my arms left to right, moving the ropes as the kite performs a figure-eight in the sky, slowly dragging me along the soft sand.

While I don’t get to take to the water (you need about eight hours of lessons) I do get enough of a taste to know that I one day I can take to the surf without needing arms the size of Tarzan.

The Festival of Surfing

The beauty queen of the Sunshine Coast has to be the aesthetically pleasing Noosa. Pulling up in the narrow, boutique-filled streets I can’t help but feel relaxed. Even the backpackers look cleaner here as they roam the streets with their surfboards and cases of beer.

I happen to be in town for the annual Festival of Surfing, so the town is buzzing with contestants who have come from as far as California to compete in the amateur surfing competition. It’s not the most serious of competitions, I’m pretty sure extra points are given for effort in crowd-pleasing, but the longboarding heats are spectacular as contestants perform tricks on their boards.

Moves like the “cockroach,” which involves lying on your back with your feet kicking in the air like a roach in missionary position.

The tandem events are Cirque du Solei on surfboards as the men gracefully lift their female partners in the air and the soft, rolling right-handers that Noosa’s main beach pumps out makes for the perfect stage setting.

If the aquarium was slapstick theatre, then this is more like an avant-garde stage show. 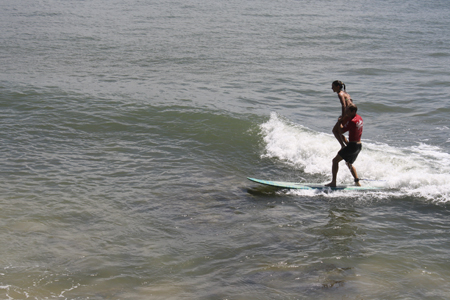 The next day, probably somewhat inspired by the tandem-dog surfing skills, I sign up for a lesson with Coolum Surfing School.

That’s right, I’m in Coolum, home of one of Australia’s richest idiots, but I’m not playing putt-putt with Plateosaurus. I’ve got 90 minutes with Ben, a surf instructor who used to work in finance but traded it in when the GFC hit. Now, instead of crunching numbers he’s shredding waves in the green room. He’s also fluent in surf lingo. Ben teaches me about ‘rails’ and how to perfect a ‘backhander’.

It’s not my first surfing lesson, and, probably because of this, I have some bad habits that Ben needs to iron out. He teaches the three-step method of getting up on the board, as opposed for the one ‘jump in the air and hope for the best’ move that I am accustomed to.

In the ocean on my soft mini-mal he pushes me onto my first wave and lo-and-behold I am on my feet and carving up a 2ft wave.

Well, that is how the surf school makes you feel anyway. With their friendliness and expertise, you feel as though you’re riding unbroken 6ft waves, even if the photos suggest you are ankle deep in white wash.

It’s all about the feeling, and that’s what Ben conveys during the 90 minute sesh. Surfing isn’t just a sport, it’s a way of life. It’s about becoming one with the ocean. Ben talks for the whole lesson about how surfing is an ethos that only a true surfer can understand.

If it makes you feel nauseous just reading that, then you need to get up to the Sunshine Coast, where animal husbandry is cute, ocean husbandry is sexy and dinosaur golf, well, who really knows what that is.

A weekend in Rome

Great Scot! Do the Highland fling-yourself-off-a-cliff and other off-kilt-er adventure activities on holiday in Scotland

BA captains reveal their favourite views from the air