I heard this joke once that went, “When you leave Adelaide, turn off the lights”. And after an hour walking around the CBD and Central Market on a recent Spring morning, I was beginning to wonder if it may be true. Sure, there were tonnes of beautiful buildings and churches (they don’t call it the City of Churches for nothing) and what appeared to be a ring of parks and gardens surrounding the city, but it was all too spaced out and hard to make sense of.

But I’m here to suss out the soul of this city and am not going to give up without a fight. So, after checking into the Adelaide Central YHA, I call a professional:  Mary Anne Kennedy of A Taste of South Australia. Along with her small team of local know-it-alls, Mary Anne offers four themed half-day walking/driving tours of Adelaide.

I opt for number three – the North Terrace – art galleries, historic houses and museums – and, while walking to Marry Anne’s car, tell her about how her city had left me underwhelmed earlier that morning.

“I’ve heard that a lot – people arriving in Adelaide, going for a walk, and thinking the place is boring,” she says. “It’s not like Sydney where you can walk around and say ‘There’s the Opera House, there’s the Harbour Bridge’. You really need to speak to locals to get an understanding of the place. It’s what inspired me to start these tours.”

Unlike most Australian cities, Adelaide didn’t begin as a colony for convicts but as a base for free English settlers who first came to South Australia in 1836. It is also unique in that it was built on a grid and surrounded by parks and gardens – 29 of them I learn, covering 45 percent of the central business district!

“At the time people feared an invasion from Russia, so Colonel Light, the city’s founding father, designed the parks to be wider than a cannonball could be shot from the most powerful cannon in the Russian’s arsenal at the time,” Mary Anne explains.

Our first stop is Light Square, where a bronze statue of the Colonel stands watch over the city he founded 176 years ago. Directly in front of him is the majestic Adelaide Oval, one of the world’s greatest cricket grounds. And sandwiched between it and the rolling green pastures of the Adelaide Hills, Adelaide’s gleaming buildings and monolithic cathedrals reach into the sky in testament to the Colonel’s genius. “The reasons that led me to fix Adelaide where it is I do not expect to be generally understood,” he wrote after ordering the settlement to pack up and move from the city’s original position on the coast to this spot on the banks of the River Torrens. “But I leave it to posterity, and not to my enemies to decide whether I am entitled to praise or blame.” 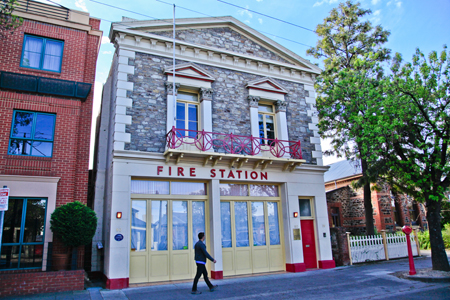 We continue along North Adelaide’s aptly named Strangeway Terrace – a long, wide boulevard lined with the classic Victorian bluestone mansions of such size and scale that they’d put the Wayne Manor to shame. A few I’d even classify as castles, with towers and minarets and maze-like gardens.

Marry Anne points out the wrought iron fences that were the all the rage in the early 1800s, some covered with rose bushes. On another street, she points out the balconies and wraparound verandas of the Federation-style homes built in the century that followed when Colonel Light’s great grandchildren got sick of being stuck inside hotboxes on 40-degree summer days and finally cottoned on to the idea of indoor-outdoor living.

On another street yet we see old workman’s cottages that have been converted into cute little one-bedroom terrace apartments, and in another, an old fire station that’s been converted into a holiday suite. The Fire Station Inn not a cheap place to stay – nearly ten times the price of a dorm at the YHA – but the rate can be split four ways and it’s one of the few places in the world where you can sleep alongside a 1942 International fire truck! It’s in mint condition and the engine still works, or so reckons the innkeeper, antique dealer Rodney Swift. “Most fire trucks in Australia are made for fighting bush fires, but this one was brought in from America to fight factory fires as there were lots of Air Force bases around Adelaide during WWII,” he says. “It was never used, though. The Japanese Imperial Navy never got this far.”

After a long chat with Rodney, we jump back in the car. Our route takes us down O’Connell Street, past rows of trendy cafés and old pubs with stained glass windows. We keep on driving, past the University of Adelaide Sport Ground where an archery class is going down and into the car park of the Adelaide Botanical Gardens. I’m not that keen on checking it out but Mary Anne insists and I’m glad she did. Because like so many other things in this city, it’s amaze-balls! It’s design was based on Versailles and is home to a stunning glasshouse from Germany was that dismantled, shipped over and reassembled in front of the main lake in 1875; the Bicentennial Conservatory – 100-metre-long hothouse with its own tropical jungle and trees from as far as North Queensland and New Guinea; the National Rose Garden; and a genuine wetland system. On and on it goes, 125 acres of lush, colourful flora, and we’re only a few minute’s drive from the heart of the city. 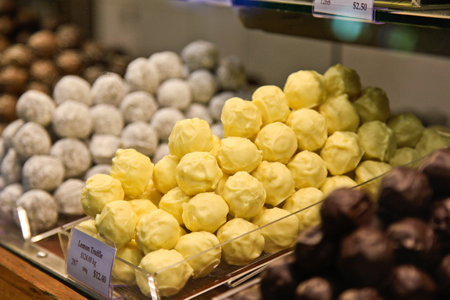 We’re back in the car and my head is spinning again. On the left is the Australian National Wine Centre – a futuristic building shaped like the ribs of a wine barrel where visitors can learn about South Australia’s rich winemaking history and partake in wine tasting.

But we’re now on a different mission, to learn about (read: consume) a temptation that’s much closer to my heart – the Haigh’s Chocolate Visitor Centre.

If you’ve never heard the name before, Haighs is an institution. Founded in 1915 and run by fourth-generation members of the Haighs family, it is the Rolls Royce of Australian chocolate (sorry Cadburys fans, but you’re eating glue in comparison). Yet it’s the aroma of slowly roasting cocoa beans – not the rich sweet taste that’s soon to come – that assault me the moment I walk into the door.

What follows ranks as my own version of heaven: a department store-size chocolate shop where I find chocolate frogs the size of dinner plates, rocky road chunks the size of house bricks and a shelf of factory seconds where I go totally nuts (the same great taste at low, low prices). After sampling a chocolate bars, a dozen fruity centres and a couple of chocolate truffles, we join one a free factory tour. My eyes want to pop out of my head as I see technicians in lab coats mix huge vats of melted chocolate and spread rich, gooey fudge across a stainless steel bench in a scene cut straight out of Charlie and the Chocolate Factory.

Going to the chapel

By the time I roll myself out of there, Mary Anne tells me it’s time to wrap up our tour. But before my guide drops me back at the YHA, she offers to show me St Xavier’s Cathedral in Victoria Square. A towering Gothic Revival Catholic Church that took 109 years to build, it’s the jewel in the crown of Adelaide’s 800-odd churches.

“Well, this is the City of Churches,” I say. “Might as well see one church while I’m here.”

“Did you know?” says Mary Anne, “Adelaide was called the City of Churches not because there are so many churches but because South Australia was founded on the concept of freedom: freedom for work as convicts were never brought here, and freedom of worship. Not only for the major Christian denominations, but for people of all faiths and religions.”

“Are there any old synagogues?” I ask.

Mary Anne takes me to Rundle Street – another strip of beautiful old pubs and cool bars and restaurants – where she turns into a little laneway called Synagogue Place. Standing alongside a row of antique shops is a domineering art-deco building painted gunmetal grey that could be mistaken for a super villain’s lair if not for the large Star of David – the Jewish insignia – carved into the façade. Built in 1939, this house of worship was converted into a nightclub in 2009 and is now a high-energy nightclub called Apple that’s also known as the Synagogue Nightclub and the Church Nightclub.

Set across two pulsating levels with three sleek bars, dance floors and glamorous settings all around, it epitomizes the hidden mystique and unexpected wealth of this city.

I think back to the joke about turning the lights off when you leave Adelaide, and then the endless traffic, cold steel buildings and generic nightclubs of my home city, Sydney. The joke, it seems, is totally on us.

The daftest travel questions ever asked

Grow Wellington and Xero seeking IT talent in UK