In 2010, Julia Gillard ousted Kevin Rudd as Labor leader to become Australia’s first woman prime minister. Last week, he got his revenge – this time ousting her. She’d thrown open her job to a leadership ballot in response to decreasing poll ratings, just a few months before a general election (and the a day after photos were released of her knitting a kangaroo). It was, for Gillard, to prove a foolish move. She lost by 57 votes to 45, putting an end to her three-year reign.

The former leader, who arrived in Australia from Wales with her parents as a five-year-old, is expected to leave politics. With tears in her eyes, in her outgoing speech Gillard talked about what being PM might mean for other female leaders: “What I am absolutely confident of is it will be easier for the next woman and the woman after that and the woman after that and I’m proud of that.” Here, we give her a TNT send-off, recounting her best and worst bits.

It’ll be the speech Gillard will be remembered for. Her ratings soared, and she won approval in media around the globe, after calling conservative opponent Tony Abbott a “sexist and misogynist”. The YouTube video of her 15-minute fiery tirade last October has been viewed nearly 2.4million times.

She accused Abbott of double standards after he criticised her for standing by then parliament speaker Peter Slipper in the wake of sexist text messages. “I will not be lectured about sexism and misogyny by this man,” she said.

“The leader of the opposition says people who hold sexist views and who are misogynists are not appropriate for high office. Well I hope … he is writing out his resignation. Because if he wants to know what misogyny looks like in modern Australia, he doesn’t need a motion in the House of Representatives, he needs a mirror. That’s what he needs.” Cue huge praise for Gillard, and the redefining of the word misogynist in the dictionary. 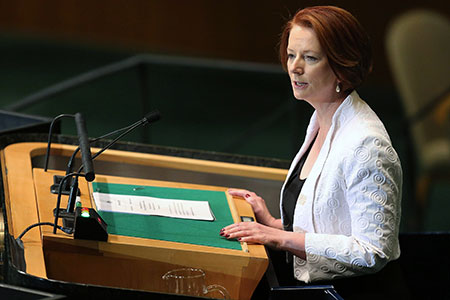 After Gillard was elected as leader by her party in 2010, she uttered the immortal words: “There will be no carbon tax under the government I lead.”

Just to back this up, a few days later she reiterated, for those who weren’t listening carefully the first time: “I rule out a carbon tax.” So it was no surprise many Aussies were left pissed off when, not even a year later, Gillard announced, yes, you’ve got it, a carbon tax.

Well, a carbon pricing mechanism to be exact, leading to anti-government protests including chanting of “ditch the bitch” and placards reading, “Ju-Liar”, which made global headlines. Abbott wrote on his website a year later: “The passage of time does not diminish the seriousness of her actions or restore the broken trust with the Australian people.” Seems he was right.

What is it with Gillard and shoes? The first time she lost a pump was on Australia Day in 2012, as she was dragged to safety by her bodyguards in Canberra after being surrounded by angry Aboriginal protesters. The blue Midas shoe was kept hostage as a symbol of a move to “give us back our country” by the campaigners, pissed off with Abbott who’d said it was time the nearby Aboriginal Tent Embassy (campaigning for  indigenous rights) “moved on”.

Weeks later, she had another Cinderella moment, losing her shoe on stage at Sydney’s Custom House in front of a huge audience. She grabbed world headlines again in October 2012, when she fully stacked it during a visit to India. She laughed it off by saying men didn’t have to cope with walking in heels on grass. In an interview with TNT, she said: “I’m getting around in more wedges than high-heels. They’re the safer option.”

Earlier this year, Gillard issued a historic national apology to victims who were forced to give up their babies during late the 1950s to the 1970s. Hundreds of families gathered to hear the speech, hailed as one of the “more beautiful and principled given by a PM in Australia” by the Guardian.

Gillard said to the unmarried mothers who were coerced or deceived into giving up their children to adoption by married couples: “To you, the mothers who were betrayed by a system that gave you no choice and subjected you to manipulation, mistreatment and malpractice, we apologise.”

The personal apology was seen as a significant step in the healing process for the families affected by the policies. 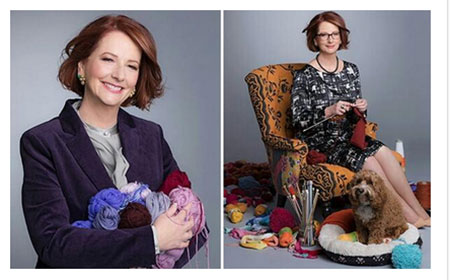 Fail: They think it’s roo over, it is now

Let’s face it, it sealed her fate. No one wants to see their prime minister smiling unnervingly, sitting in a chair knitting a kangaroo as their country’s economy edges towards a cliff. Gillard was also photographed by Australian Women’s Weekly not only in action making the gift for the Duke and Duchess of Cambridge’s first-born, but also, weirdly hugging colourful balls of wool to her stomach, like it was a baby. To boot, it materialised that it was actually the ex-PM’s idea for the photoshoot.

Fairfax Media wrote scathingly: “Isn’t crafting, in all its forms, the hobby of the 1950s housewife? Knitting is something nannas do, right? Therefore it must be lame? I mean, it’s not as if she’s achieving anything…”

Frontbencher Christopher Pyne said: “What it shows is that we know the prime minister is good at spinning a yarn and now we have the photographic proof of it.”

Landing aborted! Pilot too busy texting to land a plane 392 feet from the runway

The Londoner’s guide to making your money go further