Focussing on the personal ratehr than the political, The Iron Lady gives a somewhat unbalanced view.

Told through flashbacks as a dementia-suffering Thatcher shuffles about her home, talking to her deceased husband Denis (Jim Broadbent) amid confusion she is still prime minister, we get a potted history of the moments that shaped the young Margaret Roberts – the motivations that fuelled one of this country’s most divisive figures, the patriarchal society she bested, and the sacrifices she made as her family took a backseat to her political ambition.

But Abi Morgan’s script shows us too little of the political world, or indeed the world at large. Archive footage shows the poll tax riots, one sequence shows protesters calling her “a monster”, and there are those manoeuvring within her party to see her ousted, but there’s too little of her government’s impact on the public or of the political steps that got her to power in the first place.

Streep’s performance anchors the film, capturing Thatcher’s traits without mere mimicry, revealing the person behind ‘the monster’. Thatcher explains to her physician at one point she’s interested “in thoughts, not feelings”, and it’s a shame Phyllida Lloyd’s film has too much of the latter and not enough of the former.

Good for: Streep’s performance and seeing the woman behind the public portrayal 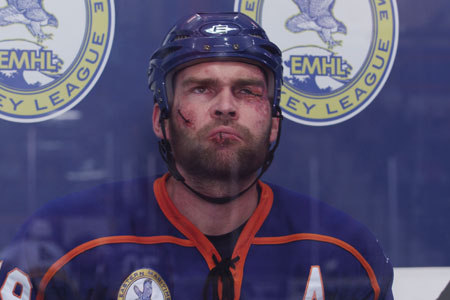 Scott stars in this comedy as a nice-but-dim bouncer whose way with his fists makes him an unlikely ice hockey hero. Goon adheres to sports movie cliches (underdog suffers setbacks then prevails) and Scott’s romance with Pill’s groupie never sparks, but its foul-mouthed, bloody and bruised spirit keeps it swinging through to the end.

Video: Irish wakeboarder pushed off boat into the path of shark in terrifying viral clip