The world’s highest restaurants: five of the best

Where else would you find the world’s highest restaurant but Dubai? The decadent desert city is so fixated on collecting the world’s superlatives that, to date, it boasts the world’s biggest fountain, the world’s biggest candy store, the world’s tallest building, and even once claimed to have built the world’s biggest cardboard box pyramid (no, really).
Situated on the 122nd floor of the world’s tallest building, the Burj Khalifa, At.mosphere serves dinner with a view from 1,350 feet. Sprawling below is the futuristic Sheikh Zayed Road, Dubai’s main motorway lined with space-age skyscrapers that twinkle by night. You might even catch a glimpse of the world’s biggest fountain,  a spectacular display of dancing water jets set to music that sits at the foot of the 2,716ft tall tower.
Diners reach the restaurant via a one-minute-long ride in a lift, guaranteed to make your ears pop. In typically surreal Dubai fashion (this is the place where you can go skiing in -4C temperatures in a mall in a desert, after all), guests step out on the 123rd floor and then descend a staircase to the world’s highest restaurant on the floor below.
The fine-dining fare – dishes include scallops with ricotta dumplings and wagyu carpaccio – is offered alongside a range of steak and seafood grilled to perfection in a Spanish charcoal oven called a Josper. Meat freaks should order the Rangers Valley tenderloin, which is said to be the tenderest cut of meat in Dubai.
Inevitably, the setting is not the only sky-high element of this restaurant – if you weren’t already feeling queasy after a heavy meal at this height, you might well end the night choking when you see the bill. Starters cost around £25 and that sensational steak weighs in at £50. Add drinks and you’re looking at a minimum £100 per head.
Still, the assault on the wallet and plain-wrong punctuation aside, At.mosphere is a once-in-a-lifetime experience you’ll never forget.
?See: atmosphereburjkhalifa.com 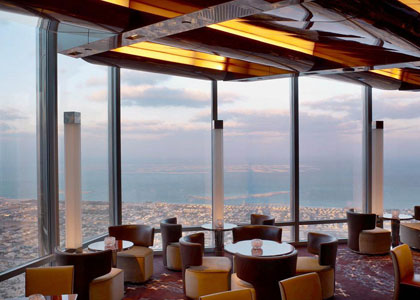 In a move that no doubt ticked off Dubai, Hong Kong opened the world’s tallest hotel in January. At 1,600ft high, the Ritz-Carlton has not one, but three restaurants on its 102nd floor.
The best is Tin Lung Heen, which serves up traditional dim sum and premium Chinese teas while your jaw drops at the view from its floor-to-ceiling windows. The uninterrupted sight of Victoria Harbour and Hong Kong Island is well worth the vertigo.
See: ritzcarlton.com 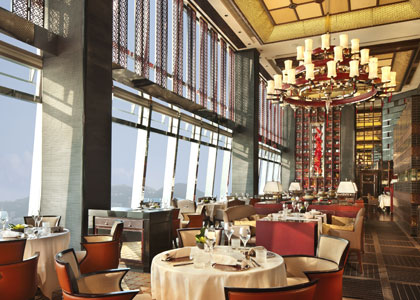 Eagle’s Eye restaurant does exactly what it says on the tin: it takes a 12-minute gondola ride to reach this eatery on the very top of British Columbia’s Dogtooth Range in the Purcell Mountains, offering an eagle’s eye view of its stunning snow-capped peaks.
Part of the Kicking Horse Mountain Resort, you can feast on the likes of bison short rib, then work off the calories with a hike along the ridge. The view takes in five national parks.
See: kickinghorseresort.com 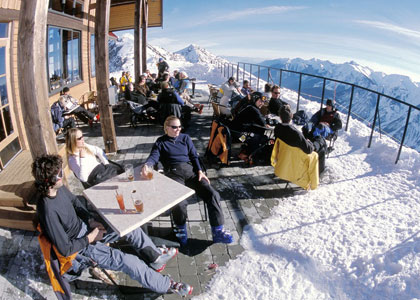 Not to be outdone by mountains, hotels and gigantic towers, Bangkok is home to the world’s highest al-fresco restaurant, Sirocco.
Perched on the 63rd floor of the Dome at Lebua, an exclusive spot at the five-star Lebua hotel, this terrace-set eatery offers a breathtaking vista of Bangkok and the Chao Phraya river while you chow down under the stars. Mediterranean food, low lighting and a live jazz band make this one of the most romantic spots to dine on high.
See: lebua.com 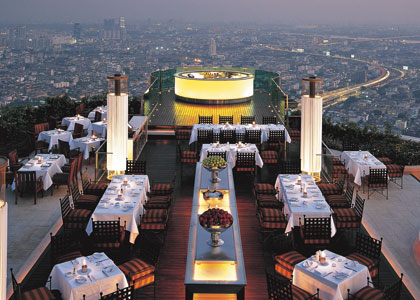 Towering over Shanghai’s ultra-modern Pudong district, Italian restaurant Cucina serves hand-made pizza and pasta alongside a panorama that includes the Oriental Pearl Tower – perhaps the city’s most iconic structure – and the magnificent mixed architecture that makes up The Bund.
A cosy mock-Tuscan affair on the 56th floor of the Grand Hyatt (once-upon-a-time the world’s tallest hotel), make sure you also pop up 31 floors to Cloud Nine bar for a post-dinner tipple.
See: hyatt.com 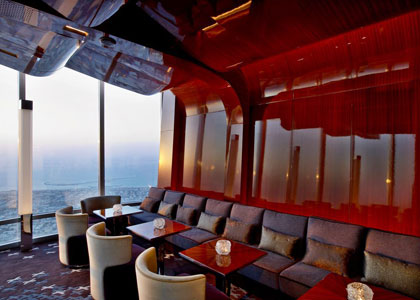 W Province to do it the hard way