The Palace theatre seats around 1,400 – so do the sums and it’s a pretty safe bet that this production is going to run and run, no matter what the critics say. But Potterheads lucky enough to grab a ticket (or, rather, a couple – the show’s in two parts) won’t be disappointed in this double helping – the eighth – of wizardly adventures.

Written specifically for the stage, HARRY POTTER AND THE CURSED CHILD proves to be the gripping theatrical equivalent of the page-turning books which first introduced us to Hogwarts. The combination of J.K. Rowling’s imagination and familiar characters, dramatist Jack Thorne’s playwriting skills and John Tiffany’s directorial talent to bring the whole lot together   (not to mention a flurry of magic, trickery and Steven Hoggett’s atmospheric cloak-swirling movement) proves irresistible as we get a chance to catch up with Harry almost two decades after he defeated the Dark Lord Voldemort. 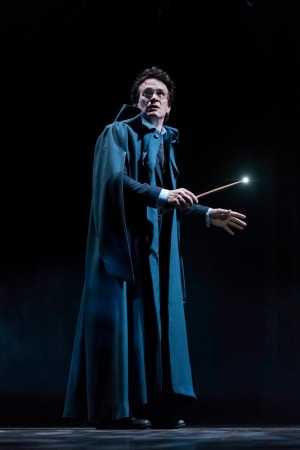 Now 37 year old Harry (Jamie Parker) is drowning in paperwork as Head of the Department for Magical Law Enforcement and he and Ginny, Paul Thornley’s likeable, laidback Ron and Hermione (now Minister for Magic) have school age children of their own and it’s time for young Albus Severus Potter and Rose Granger-Weasley to set off on the Hogwart’s Express and face the Sorting Hat’s selection process.

Critics have been encouraged to keep the secrets, but it isn’t giving too much away to reveal that unhappy Albus (Sam Clemmett) finds a surprising best friend in geeky, unpopular Scorpius Malfoy (the white-blond son of Harry’s old enemy Draco, apologetically played by the excellent Anthony Boyle). Linked by the shadow of their respective fathers’ reputations, the two of them embark on a series of time-travelling adventures to right past wrongs.

The live owl was ditched in previews, but a deceptively simple design swiftly transforms suitcases and moving stairways, the story twists and turns just like the books, and the Dementors are appropriately breath-taking in a completely involving marriage of imaginative stagecraft and engrossing storytelling.

Charles and Camilla comes to grips with some Koalas

London gig: ‘Ones to watch’ Peace play Birthdays April 30 – May 3