Despite still having to refer to the script (she’ll no doubt be word perfect by the time you read this)  Dumezweni is totally convincing as 55 year old, menopausal Linda, successful senior brand manager for a cosmetics firm and happily married mother of two who somehow really does seem to have had it all. But the cracks are starting to show as her confidence and security come under threat on all fronts. Her pitch targeting a more mature market is rejected in favour of sly, new, twenty-something brand strategist Amy’s proposals, her preoccupied teacher husband is just that bit too swift denying an interest in the young lead singer of his recently formed band, and her unhappy elder daughter Alice (Karla Crome) refuses to take off the filthy skunk onesie she’s worn for months.

Es Devlin’s sinuous, multi-tiered rotating set serves as clinically smart office and stylish family home as Linda’s life unravels – a tad over dramatically and with Lear-like overtones in the second half. But Skinner accurately, often very wittily, pinpoints the changing ways in which women are perceived as they age (those annoying wolf-whistles as one passes a building site surprisingly missed when they stop altogether) and Michael Longhurst’s well-cast production holds the attention throughout. 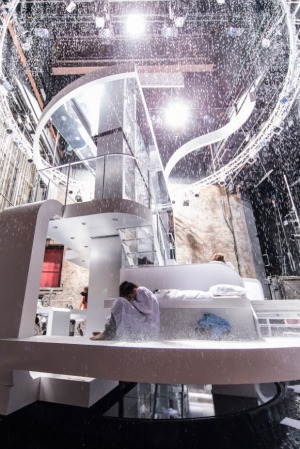 And in a neatly ironic touch, Skinner ensures that, although Alice’s 15 year-old half-sister Bridget has already come to the conclusion that on stage (as in life) men usually get the best and biggest roles  – that’s definitely not the case here.

Wait almost over for Australia