Then this fragmented two-hander by Brooklyn-based ensemble the TEAM (which premiered in New York a couple of years back) may be for you.

It begins with an imagined conversation between the two iconographic Americans, moves to stuck-in-a-rut, insecure Ann’s modest home where she’s entertaining Brenda (the more adventurous taxidermist whom she met on-line), then sets off from South Dakota to Graceland in Memphis.

With the help of video footage and numerous references to Thelma and Louise, Libby King’s stolid, depressed, Elvis-channelling Ann and Kristen Sieh’s sprightly Brenda/Teddy slip in and out of their characters in this surreal investigation of gender and what it means to be American. There’s the occasional memorable moment (a heavily whiskered Teddy in boxing gloves biffing a herd of oncoming bison displayed on a large green screen), some interesting autobiographical facts combatively exchanged between the dead popstar and deceased president, and unquestionably committed performances, but I’m afraid this 95 minute collaboration left me underwhelmed and uninvolved (perhaps partly because the head of the guy in front of me almost completely obscured a couple of the small video screens, perhaps because too many people had contributed too many ideas). 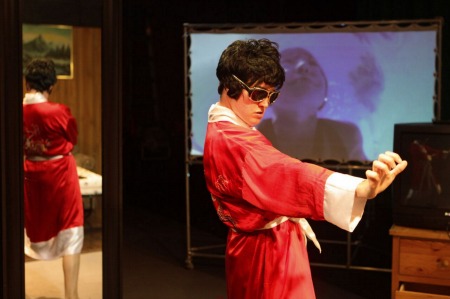 But it’s only fair to report that the first night audience gave it a warm reception –  which the actors, certainly, deserved.

QUIZ: Drivers, is your stopping distance knowledge up to speed?

Opinion: Thatcher – respect her funeral and respect our right to protest