He’s followed a similar career trajectory both in terms of the roles he’s played and by branching out into film, directing and production. Now, to bring his yearlong season at the Garrick to a close, he’s taken on a role which, for a previous generation, was indelibly associated Olivier –  the failing music hall performer Archie Rice in John Osborne’s 1957 criticism of a changing England.

We see him first, a lonely spotlit figure tapping his way towards us like a desolate Mr Bojangles, before the stage lights up to reveal both the crumbling seaside theatre where, nightly, he’s struggling to raise a laugh and the family’s dingy lodgings where they’re way behind with the rent. 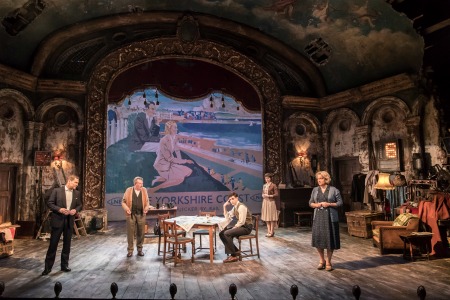 It’s 1956, Britain is in crisis after Suez, and vaudeville is on its last legs. Archie’s numerous attempts to win back an audience – including putting semi-naked girls on stage – aren’t helping to pay the bills. His father (a fine Gawn Grainger replacing John Hurt who had to withdraw for health reasons) once a performer himself, complains constantly about the state of the nation, harking back to the Edwardian era. His daughter has suddenly become political, and whilst one son (Mick, a soldier) has yet to return from Egypt, the other has been in jail for his pacifist views.  Along with Archie’s regular infidelities, it’s all too much for his second wife Phoebe (Greta Scacchi) who, even more than the rest of the family, seeks solace in the bottle.

As the iconic Archie, an ever-versatile Branagh oozes self-loathing in Rob Ashford’s fluid production. He’s weary,  angry, almost incapable of feeling and, by his own admission, “dead behind the eyes” as he performs for his audience with a fixed, fake grin, his movements slightly camp, his jokes decidedly blue and his tongue, when he gets home, capable of being very, very cruel indeed.

Credit cards and travelling – how to make the right choice

Aussie racehorse Black Caviar to grace the cover of Vogue