There was a time when Michael Crawford could fill the largest London theatre, but now, in his midseventies, he’s chosen this small scale chamber piece with just a solitary (but expertly played) piano providing the music. As old Leo, he’s rarely offstage as he watches the events of those few weeks in 1900 unfold all over again, reliving his naïve schoolboy crush on the wilful daughter of the house (Gemma Sutton’s sweet-voiced, upper class Marian) and his realisation, too late, of the true nature of the “business” letters he, their private postman, has been conveying between her and tenant farmer Ted (a virile Stuart Ward) 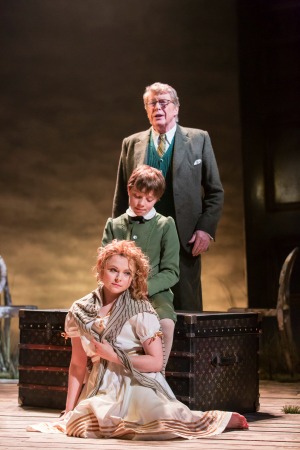 It’s well sung by all (though, on a single listening at least, the music is unlikely to linger in the memory) with a supremely confident performance from (on the night I went) Archie Stevens as privileged Marcus (Leo’s school friend whose sudden bout of measles forces him to leave his guest to his own devices) and a touchingly sympathetic one from 13 year old William Thompson as the conflicted young Leo.

Some awkward staging decisions and a slow moving first half detract from what could have been a more affecting evening. But Crawford, though diminished in vocal power, still has the expressive voice that made him such a heart-breaking Phantom of the Opera and the production grows in strength as he confronts his younger self and reveals the long-lasting damage of the events of long ago.

Pietersen caught speeding Down Under