We first see Rory Kinnear’s drunk and disheveled K watching a lap dancer before he staggers back to his bachelor lodgings, only to be woken by a comptroller and a couple of scruffy guards  who claim his clothes – and his breakfast – as perks of their job. 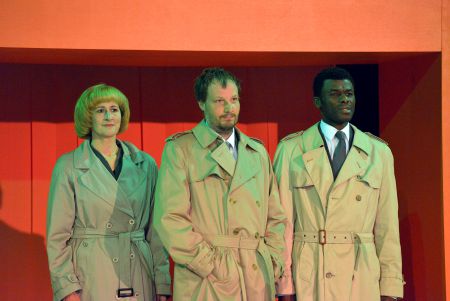 A trio of his work colleagues, clad in identical fawn raincoats, waits at the door and shadows him, silent watchers, as he goes to work and tries to sort out a mess he can’t get to grips with. Miriam Buether’s travellator set, with walls of sickening salmon pink, transforms the auditorium into a bisected courtroom, with bedrooms and offices sliding in and out of view as K’s sexual encounters (with Kate O’Flynn as a variety of young women) increase his feelings of guilt about something – but what? – he may or may not have done at some point in his life. Overhead, a giant cutout keyhole suggests there is no privacy in this bureaucratic state where, in order to present his case, K accumulates a whole wheelie-bin full of pointless paperwork. 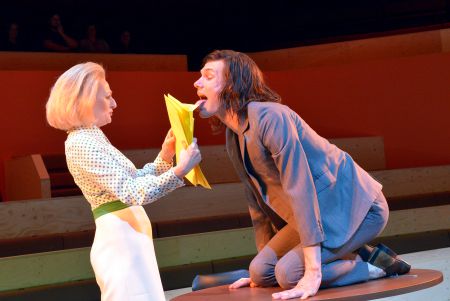 Richard Jones’ production  is full of grotesque characters and, over two interval-free hours, Kinnear – confused, desperate, angry, and called upon to deliver his interior monologues in a disjointed language reminiscent of A Clockwork Orange – once again proves himself one of the most impressive actors of his generation.

The one thing worse than a shark? A two-headed shark – mutant maritime muncher discovered by scientists