This week’s essential events in London

This Australian duo have been peddling their off-beat physical comedy for what seems like forever, and they’re still going strong, having wowed audiences in Edinburgh and New York. In their latest show, you can expect to encounter a spot of underwater horse-racing, as well as witnessing a kung fu fight against a fly.

One of London’s newest markets has sprung up in the concrete jungle of the east. But the surrounds have made organisers more determined to ensure their market is colourful and cruisey enough to persuade people to make an appearance on
a Sunday morning when their mates are sleeping off the night before.

The Mayans were responsible for a bunch of crackpot end-times prophecies which have been embraced by today’s tinfoil-hat brigade but they also had a thing for chocolate. At Kew Gardens, you can make a batch of the brown stuff after offering an origami flower to placate the sacred jaguar god who lives in the water lily pond.

Any Torture Garden event promises to be a real eye-opener, attracting a mixture of goths, punks and costumed fetish freaks, and there’s a rigidly enforced dress code to ensure everyone makes an effort. The venue, London’s world-famous Ministry of Sound, is a suitably atmospheric locale for one of Torture Garden’s biggest annual parties, which will undoubtedly be a night to remember. 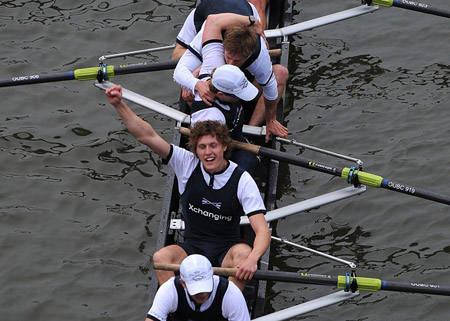 Banks of the Thames

It’s that time of year again, when thousands spend a boozy afternoon thronging along the Thames, cheering on a bunch of toffish rowers from Oxford and Cambridge. Of course, it’s not about the rowing so much as the parties that spring up in the pubs and parks along the route on either side of the river. The crowds arrive early for this quintessentially London knees-up so it’s worth staking out a spot in advance and, of course, the trip home can be a nightmare, so don’t make any hard-and-fast dinner plans.

Stock up on all your Easter food at this market, which springs up on the banks of the Thames. More than 40 vendors will be setting up shop to sell food and drink. Sure, you could go to Sainsbury’s for your shopping, but you’d miss out on the satisfaction of inspecting the produce and getting something that really takes your fancy.

The performers of this Russian troupe have a reputation as the most skilled circus acts in the world, and their new show revolves around Babushkin Sekret, the Twelve Chairs, the legend of the hunt for an heiress’s hidden jewellery. There are some dazzling skills, mostly aerial acrobatics, on display, so make sure you catch it.

QUIZ: Drivers, is your stopping distance knowledge up to speed?