Travel experience: Whistle while you Workaway

With icy rain trickling down the back of my neck and my hands practically frozen solid to the garden fork I was holding, I did have a moment of doubt. Was shovelling great piles of sodden straw matted together with duck shit so smelly it made my eyes water really so much better than the dull-but-dry office job I had left behind?

It was my first day as a Workaway volunteer (workaway.info) – one of a number of web-based exchange schemes that connect willing volunteers around the world with hosts who need an extra pair of hands – and I was already wondering if I had made a catastrophically bad decision.

My host, a no-nonsense Yorkshire woman who had spent the past 15 years living alone on a remote smallholding in north-eastern Spain clearly had no time for soft city types. And so, the duck shit having been relocated to the compost pile, she wasted no time in sending me down a disused well with a bucket on a string. For the rest of the day I repeatedly filled said bucket with broken glass, plastic bottles, old plates and the odd semi-decomposed sock that had been tossed into the bowels of the earth over the years, for her to haul up and dump in a wheel barrow.

Having spent the wettest winter on record squelching around England, I’d decided it was time to wave goodbye to computer screens for a while, and head off to sunny Spain. My aim was twofold: to experience the country beyond the sand and sangria, and to learn more about the world of organic gardening and sustainable living.

Similar to programmes like WOOFing, ‘workawayers’ receive board and lodging in return for four to five hours’ work per day, five days a week. Unlike WOOFing, however, hosts on the Workaway site are not necessarily farmers, and may be looking for individuals or couples to help with anything from childcare and language exchange to gardening, building or hospitality work.

My first placement wasn’t all bad, and having apparently passed the initiation test, I was re-allocated to more enjoyable jobs, such as feeding the poultry and collecting eggs, walking the dogs, weeding, and planting crops for the coming season. I came to look forward to my daily visit to the ducks, who never failed to make me smile as they waddled about on their splayed orange feet, quacking away happily, and enthusiastically attempting to swim in two inches of filthy water.

On days off, my host took me with her to local farmers’ markets in quaint medieval villages, and to the picturesque Costa Brava, where steep pine-clad hillsides plunged down into sandy coves, which, at that time of year, were devoid of people.

One Saturday afternoon in March, I found myself standing at a long table with a bib tied around my neck, readying myself for my first calçotada. A seasonal gastronomic celebration particular to the Cataluña region, calçotadas are noisy, messy affairs that involve the grilling of dozens of bundles of large spring onion-like vegetables, which are then stripped of their charred outer leaves, dipped into a rich red sauce and dangled overhead, before being dropped into open maws. It’s all helped down with plenty of steak, sausages, and lashings of red wine poured straight from glass jugs into open mouths. It’s neither elegant nor ladylike, but it is definitely good fun. 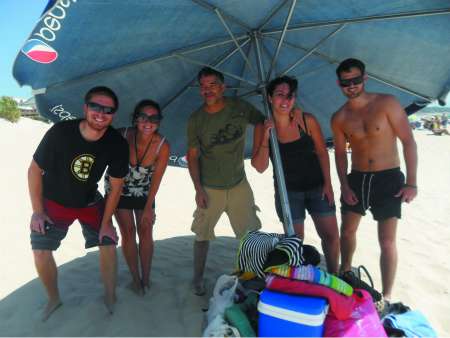 Two weeks later I arrived in Miravet, a small, historic village on the banks of the Ebro river, where a charming older Dutch couple welcomed me warmly into the home they shared with their two dogs, a dozen cats and a bad-tempered parrot. Keen advocates of sustainable living, their restored country house was entirely solar powered and, between the chickens, orchard and vegetable garden, provided for almost all their food needs.

The gardens and terraces were magical, bursting with colourful flowers and all sorts of private little nooks to sit quietly with a book, or laze away the afternoon in a swaying hammock.

In the mornings I would pick oranges from the tree and squeeze myself a juice, and perhaps boil a freshly laid egg, while lunch and dinner were prepared with flavour-packed vegetables straight from the garden. My hosts clearly delighted in having volunteers stay with them, and we all worked together to build a garden shed and clear the last of the winter crops from the organic vegetable patch, weed it and prepare it to sow summer crops. After the day’s work was done I would take long walks along the river, go for bike rides to neighbouring villages, and watch artisans at work in the many traditional potteries in the area.

Animal lovers in the extreme, Maria and Matthew chopped the scraps for the chickens into bite-size pieces, and even encouraged their favourite cat to sit down to dinner with them, placing a glass of water for her to drink from on the table.

Keen to show me their adopted country, at weekends we drove through impressive gorges and wine-growing country, visited ancient villages precariously perched at the edges of cliffs and picnicked by hidden waterfalls. With the sun shining on my last weekend, we took their gigantic dog, Osa (meaning ‘bear’), for a walk at the coast. Unfortunately, Osa was one of those dogs that had a tendency to bound up to total strangers and bury her head in their crotches – not the worst thing in the world, except that the beach they had chosen to take a walk on was a nudist beach…

From there I made my way south to a pretty whitewashed village in the mountains of Andalucia, where immaculate cobbled streets were lined with potted plants and a fresh water spring was channelled through the village, filling it with the sound of running water.

A dishevelled-looking man with long, unkempt white hair and a wrongly buttoned shirt bounded down the steps to greet me. He had the look and air of a mad scientist about him and was, I soon discovered, one of the most disorganised, forgetful and absent-minded people I have ever met. He was forever turning on taps or opening the fridge, then walking away forgetting all about it, muttering, “Now where did I leave my glasses/phone/wallet?”.

He was also, however, one of the most interesting, intelligent and kind-hearted people I’d ever had the good fortune to cross paths with. A travel writer and walking guide, he’d been everywhere, it seemed, and had a story for every occasion. He knew every soul in the village, had friends for miles around, and an almost constant stream of house guests.

My first weekend there I accompanied him to a get-together a friend from the next village was having. The beer and wine flowed freely, and with one of the guests being a flamenco singer, it wasn’t long before the clapping, foot stamping and dancing that is so typical of Andalucia got underway. 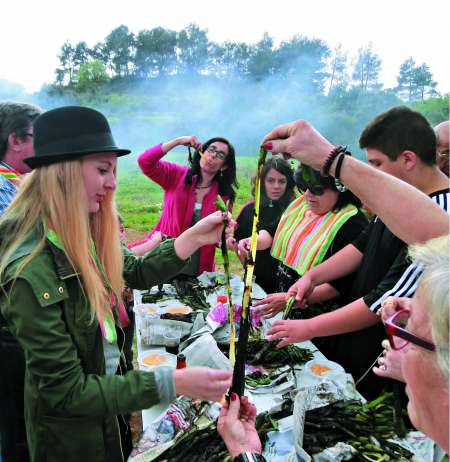 My two-week stay soon turned into four, my duties mainly consisting of driving my host around on various errands or to meet up with friends (he’d lost his licence, among numerous other things), and picking up his most valuable possessions when he left them in shops, on the roof of the car, or in the village bar.

As we drove along narrow winding roads, high into the mountains of the Serrania de Ronda and into sparkling white villages nestled next to shimmering lakes, he’d regale me with endless stories of his incorrigible ways. And in the evenings, when we arrived back in the village, I would take a moment to stand and breathe deeply, savouring the complete silence, the stars and the scent of jasmine that hung in the air.

After many-a cold beer, and many more laughs, it was time to move on. I knew anything would be a little disappointing after such a fun few weeks – but nothing could have prepared me for the absolute squalor that awaited me at my fourth stop, on Spain’s Atlantic coast.

There, the drain in the bath had clearly been blocked for some time, but the residents of the house had continued to use the shower, so I arrived to find the bathtub full of cold, grey, scummy water with clumps of hair floating in it. Toilet paper could not be put down the loo, and so there was a stinking bucket next to it, which was overflowing with dirty, used paper. Cobwebs hung from every surface, the colour of the floor was impossible to determine below the layer of filth, and the entire kitchen was sticky to the touch with years’ worth of accumulated grease. This one, I quickly decided, called for an immediate exit.

There’s always an element of risk when you choose to stay in a stranger’s home. Some hosts take in volunteers because they genuinely enjoy the interaction and exchange; others, perhaps inevitably, see it as little more than a source of free labour. But by doing your research, asking plenty of questions, and not committing yourself to anything you are not sure about, this type of volunteering can be an excellent way to meet new people, experience a different culture from the inside, and make your travel budget stretch a lot further.

Like anything in life, it’s a mixed bag. But for me, the adventure continues…

ANC distances itself from leftist allies

Andrew Mitchell’s ‘plebgate’ scandal: Where does it fit in the annals of ridiculous political scandals?