People told me that New Zealand was like England. In some ways they were right. Language, obviously. Place names are startlingly reminiscent of those back home, early settlers seeking ways to remember the land they had left. It’s green and lush, grass and fields all around. They like a beer. It gets cold (although more so in the south rather than north). But they also do things a little differently.

A beach is not just a place for a paddle – it’s one where evaporating steam reveals a hot water spring in which to bathe. Road trips take days: with no M to be stuck on, meandering journeys become something to savour. And tourist hotspots are not ice-cream-fuelled, hen-party raddled, tower-block-teeming towns, but full to the brim with mountains,lakes, and adventure.

Enter Queenstown. For a town of only 16,600 permanent residents, it sure packs a punch, compensating for its size with fame and notoriety. It’s always had its attractions. Back in the mid-19th-century, European settlers came to rest upon the banks of Lake Wakatipu, the Z-shaped glacial lake upon which Queenstown rests. William Gilbert Rees founded a farm and small town, called ‘The Camp’, but it was in 1862, when Rees discovered gold in the Arrow River, that the rush really started. Suddenly everyone wanted to be here – and things haven’t changed. More than 1.6 million tourists come to the destination every year, the equivalent to a third of New Zealand’s population, and one hundred times that of Queenstown itself.

Queenstown is beautiful, in that take-your-breath-away fashion. It is framed by dramatic mountainous formations, varying from grassy tussocks, burnt scarp slopes and snow dusted peaks. All are apparently named after what people saw,who saw it, or things they had seen before – The Remarkables,Cecil Peak, Walter Peak, Queenstown Hill and Ben Lomand. The highest point in the range is Double Cone (2,319 metres) with Ben Nevis (2,234 metres) just behind, and on any day mountain mist and hazy sunshine glow from the crests, the tip of what is a striking vista.

But what goes up must come down, and there are tons of ways to come down in Queenstown. This is of course the home of the bungee, and any day crazy cats can be seen flinging themselves off of the Kawarau Suspension Bridge, where AJ Hackett first set up shop 25 years ago. The ropes have thankfully been updated since then, but the thrills and screams no doubt are the same, as people ping on elastic towards glistening water coated rocks – and back up again. 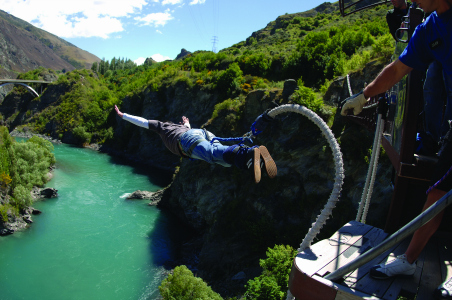 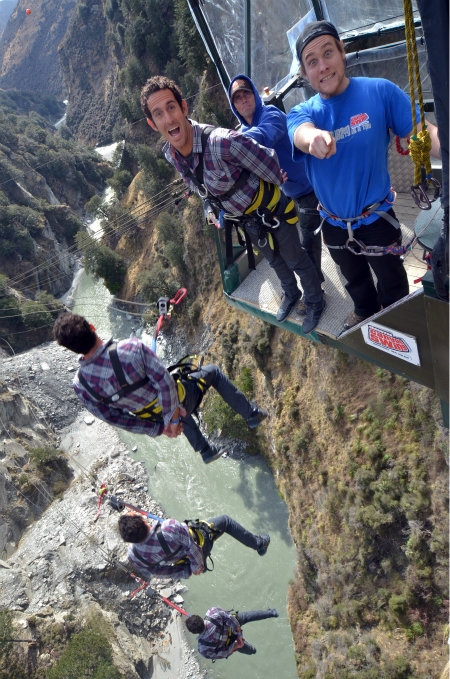 It’s not just bungee jumping. There’s parasailing, skydiving and tobogganing too. If you prefer your feet on the ground, walking tracks ravage all over, and for the more serious hikers hoping to tick off the ‘Great Walks’, the Routeburn and Milford tracks are within a couple of hours. A maze of mountain bike trails exist with which to explore and see the views,and local operators are more than willing to rent bikes upon which to vibrate down the slopes. In fact, it’s estimated that there are more than 220 adventure options available to delight visitors.

All those mountains obviously means skiing is a big draw, and Coronet Peak, The Remarkables and Treble Cone are all dotted with people gliding down elegantly and not-so elegantly during the season. Around 50 kilometres from Queenstown, towards the lovely Lake Wanaka and its crystal clear waters are the Cardona Ski Fields, regularly voted some of the best places places to ski in the world. 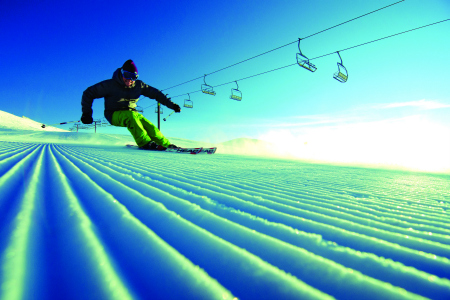 To get a taste of former farm days, head across the lake to Walter Peak High Country Farm, where tours, tea, and horse trekking are all on offer. Trotting across rolling farmland and the higher alpine climbs is a gloriously relaxing experience,the fresh air filling the lungs and the clean grassy scent delicious.While numerous boat operators exist, the most elegant (if not environmentally friendly) way to travel is upon the Lady of the Lake. Sailing since 1912, TSS Earnslaw is a 36-ton steamship, and as beautiful as the view is, the interior captures the imagination of many aboard, with the locomotive smoke tube boilers gassing, the pistons and rivets firing away, and brassy handles turning. Steamships have been traversing the lake since the 1860s, carrying sheep, cattle and grain from shore to shore (200 people or 1,500 sheep is the maximum capacity), but now their main role is to be a place for visitors to gaze out from the majesty of this vintage vantage point.

Synonymous with the River Shotover is the word ‘jet.’ The fast and frantic Shotover Jet tour through the canyons of the 75km long river is pure exhilaration,combining the two personality facets of Queenstown – beauty and excitement. The big red boats seat around 40 people, and shoot up and down at a pace of up to 85 kph over sparkling, clear water as shallow as 10 cm deep. It made Kate and Wills grin. Another way to see the river is to raft down it, and for the best experience try helirafting. Queenstown Rafting can organise the combo tour, and a short ride up to the top of the gorge in a chopper that always manages to get closer than you think it possibly can to the canyon is a perfect entrance to the start of some rapids. Blustering winds and bounding waves just make it more fun as the inflatable rafts bounce and bash down the rocks and rolling water. 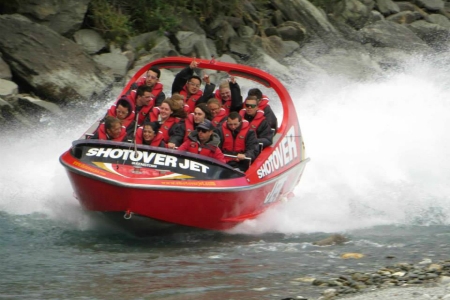 Of course, it’s not all thrills and the resulting spills. Sometimes you need to kick back, and thankfully Queenstown as a whole host of places to do so. The lake front is lined with walking paths, barbecue spots and benches, and subsequently picnicking families, hand in hand couples, and pondering individuals. The path takes you through to the Botanic Gardens, home to pretty flowers, tall trees and lapping waves, as well as tennis courts and playgrounds.

Snack time needs are met by the warm gooey goodness of Cookie Time (cookietime.co.nz),or you might want to check out some good old-fashioned sugar at The Remarkables Sweet Shop (remarkablesweetshop.co.nz), where bricks of fudge in all sorts of flavours are on offer.

Dinner one night has to be at the world famous Ferg Burger (fergburger.com). Since its days as ‘hole in the wall’ in 2001 things have come along way, and now the 20+ burgers are available 21 hours a day, and widely renowned as some of the very best. There’s no need to give you an address – just look out for the queue of hungry looking punters. Fishbone (fishbonequeenstown.co.nz)  is another option and has been around for a while, but the catches continue to be super fresh, as befits an island where no spot is more than 125 kilometres away from the sea. Or for more of those views, get the gondola up to the Skyline restaurant, where a buffet consisting of literally everything will give you enough sustenance to keep at the adventures for days. You might also want to indulge in a little Pinot Noir, the grape that makes up 75% of all those grown in the Central Otago region. Alpine ranges, glacial layers, and a sometimes tropical warmth make for depth of colour, profound intensity, and complex flavours that all enhance any holiday. 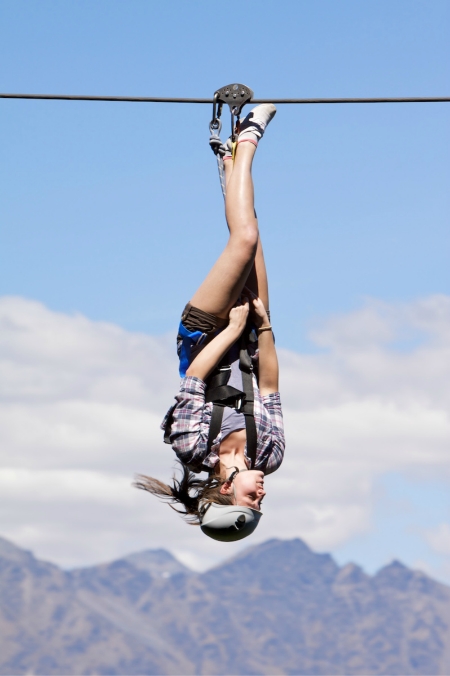 When it comes to bed time, as you would expect for somewhere attracting so many tourists, all sorts of options are available. For the lower budgets, Hippo Lodge is a lovely hostel, Along with the Happy Hippo offering advice around the hostel, the real draw is the view. How many places do you get to sit and stare at Lake Waikatipu with your spaghetti on toast? It’s a steep steep climb up, but worth it as you see the sunlight licking the lake. Or for something at the (much) higher end of the budget, Spire is stunning. When a bottle of chilled Moët, a bunch of fresh flowers, handmade rich dark chocolate truffles, L’Occitane cosmetics and a bowl of fresh fruit come as standard, you know you are in a spot of luxury. All rooms have a roaring fire, a bathroom big enough to party in, thick pile carpets and a balcony on which to ponder. Elegance itself. Ferg Burger can be delivered to your room, or head downstairs for some tasty Thai fusion food, and the No5 bar, which has an extensive cocktail list, all being carefully and attentively muddled and mixed by the friendly bartenders, served with smiles and style to you on the wooden tables and leather chairs. It might be pricey, but do it once in your life.

Queenstown really surprised me, in the best possible way. There’s so much to see. So much to do. So much to feel. Some is free, some less so. Some outdoors, some indoors. Some high up and some on the ground. All of it is beautiful.