Best for beaches: The Dalmation Coast

Croatia’s Dalmation coast has more than 1,200 islands, all with their own hidden bays and bright turquoise water. Most of the beaches on the Adriatic coast are rocky but it actually makes a welcome change from finding sand in your suitcase on the way home, and their beauty is truly unique.

Some people cruise the islands by boat, which doesn’t have to break the bank. Most coastal towns offer day trips or weekend cruises to the islands including the lesser-known, uninhabited ones such as as Suzak, which is composed entirely of sand, or Nin, where you can cover your body in medicinal mud. Both are truly a treat for beach bums who want an uninterrupted tan. The islands of Split, Hvar and Brac are the poster models for Croatian beaches, but the scene is much more party-centric with waterside bars and pumping nightlife.

Kupari is an interesting stop-off during a trip down the coast. The island was once a holiday resort for the Yuguslav Peoples’ Army and was badly damaged during the war in 1991-1995. Now it’s a post-apocalyptic bay of bombed out hotels and abandoned luxury resorts. The whole island is frozen in time and it’s an eerie experience to explore the marble floor ballrooms that have been overtaken by vines. The beaches however, are just as beautiful as ever, and many locals still visit the surreal site for their summer fix.

Croatia has some of the best electronic music festivals on offer in some mind-blowing locations. Bass-heavy Outlook takes place in a 19th-century fort near Pula with music so loud and pumping that even the stone foundations shake. Last year Talib Kweli played alongside hip-hop veterans The Pharcyde and Pharoah Monach. A few days later, Dimensions took centre stage, with a killer line-up of world music masters and alternative artists. But Pula isn’t the only festival hot spot: Unknown in Rovinj and Soundwave in Tisno are hot tickets and the 2014 line-ups are just beginning to leak.

There’s plenty of Roman architecture to admire in Pula, including an impressive amphitheatre in the centre, which is one of the largest (and best preserved) in the world. 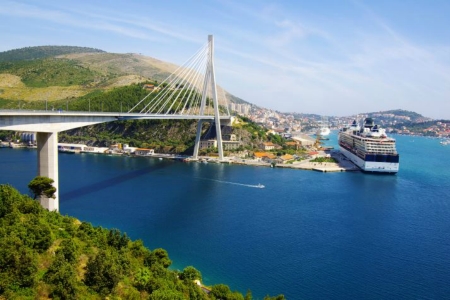 Handsome Dubrovnik has fast-risen through the ranks to be considered one of the most romantic cities in the world alongside Paris and Venice. When you first set eyes on the ancient walled city it will take your breath away. Strolling hand-in-hand down the marble streets or watching the sun set over the glimmering Adriatic Sea from the 500-year-old walls will never cease to amaze.

The pedestrian-only old town with its aristocratic piazza and Baroque architecture has dozens of top-notch restaurants with fresh seafood bought in daily. The city is also jam-packed full of family owned jewellery shops adding to the sense of romance and luxury that pervades every corner.

Dubrovnik isn’t only a fairytale city – it also has pristine beaches (and some nudist bays) that you can enjoy by day. Banje Beach is close to the old town, offering a dramatic backdrop against which to get your tan. Plat bay is 12km from the city, but it’s truly a hidden gem with complete privacy and a shallow, warm ocean for relaxed bathing.

To carry on reading about everything Croatia has to offer, give our eMag a read, or pick up a copy of TNT in town. You can find your nearest copy here.

All the sports results that matter in one click