UK weather: Heatwave over, wind and snow on way

The unseasonably warm temperatures are set to come to an end this week as the historic September/early October heat wave comes to an end.

Weather experts are predicting snow and a battering from the tailend of Hurricane Ophelia hits the North.

The sudden drop back to seasonal normality may come as a shock to sun-worshippers who flooded to the beaches over the weekend throughout the country, particularly on the south coast. Brighton beach (pictured) was packed to bursting with eager tourists and locals keen to make the best of the incredible heat and cloudless skies. 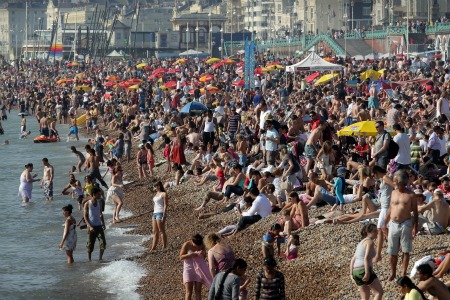 Devon and Cornwall this weekend enjoyed temperatures hotter than Madrid

at around 27c. Meanwhile, in the Dorset seaside town of Bournemouth

The previous highest temperature recorded for an October day was 29.4c in Cambridgeshire set back in 1985 – yesterday that record was broken in Yorkshire when the mercury rose to hit the 30c mark. 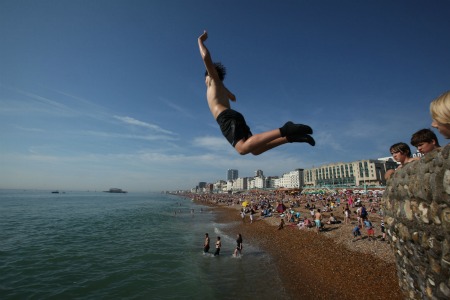 Temperatures will drop in London from 27c down to 18c by Wednesday, with

week. Frost is expected by the end of the week in both the North and the South of England, with snow hitting Scotland by the weekend.

The Met office's Craig Snell said "The autumnal weather is set to return this week with temperatures tumbling daily,"

"Wednesday looks like one of the worst days with outbreaks of showers and cloud, and by Friday temperatures will drop to around 13C in the South and 11C in the North." 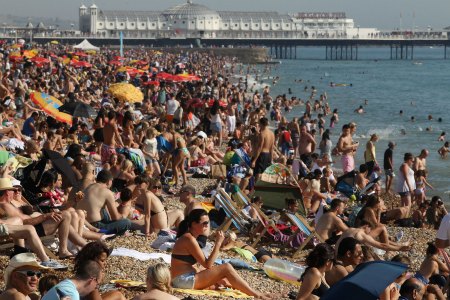 Does your suitcase contain sex toys, cocaine or an airhostess, Sir?