Jogging down Colchester high street, we weave our way between bemused shoppers before turning into the quieter Dutch Quarter. We’re on a running tour of Britain’s oldest recorded town, and enthusiastic guide Sascha Cutura is educating me about everything Colchester.

With a stimulating combination of history, outdoor exercise and endorphins, ‘sightjogging’ is a great way to get that little bit more out of your mini-break.

From Buenos Aires to Barcelona, running tours are available in some 60 locations across the globe. In the UK, they’re spreading to a variety of places such as London, Glasgow and Colchester. Far from being an Essex native, Sascha is originally from Germany but has a real passion for his adopted home: “I love it here, and I don’t think enough is being done to promote Colchester, so I started the tours myself.” 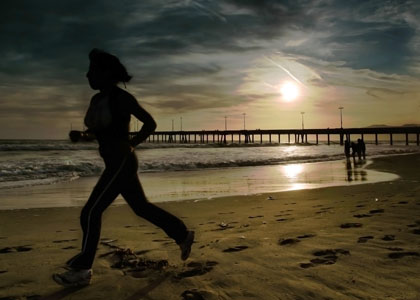 In 1648, during the English Civil War, thousands of soldiers clashed here  as parliamentary forces surrounded Royalists hiding behind Colchester’s fortified walls. One of the large siege cannon deployed on these walls was known as Humpty Dumpty, giving its name to the nursery rhyme character.

Established in LA and New York for some time, many tours are still in their infancy elsewhere. Sascha’s clientele is still mainly comprised of locals and people from surrounding villages.

“I often stayed away on business and all that hotel concierges could provide was a map with the occasional comment to avoid a particular area,” says Alan.

“Back home, I came up with the idea of providing safe guided runs for visitors.”

Alan’s usual 10k route includes universities, museums, parks and the River Clyde. But the surrounding countryside is a fantastic resource and he tailors his tours to suit individuals: “I can cover Loch Lomond, the West Highland Way and the Robert Burns Trail. “You get to understand Scotland

Back in Colchester, Sascha shows me the Roman walls that have surrounded it for almost 2,000 years. Pausing by the Balkerne Gate to get my breath back, it’s immediately taken away again by a slice of 19th century industrial architecture.

At 105-feet high, the largest remaining Victorian water tower in the UK is a red brick mammoth.

Our final stop on the hour-long tour is the impressive Norman castle where Sascha shows me the doomed Royalist leaders’ execution spot.

Globalrunningtours.com is a directory of running tours with a handy clickable map. “Its objective is to market the concept around the world,” says site creator Juan Lapadula, owner of Urban Running Tours Buenos Aires (urbanrunningtours.com.ar).

“There are more than 80 companies offering tours in over 60 cities. Tours started about 10 years ago but in the last couple of years they’ve become more popular.”

New York’s City Running Tours (cityrunningtours.com) is one of the best known.

“It’s about giving runners a chance to continue their daily routine while sharing our version of our city, in our way,” says president Michael Gazaleh.

The field is still evolving and in some places, operators come and go. But shoot off an email in advance and you could be seeing a different side to your destination – and warding off a beer belly to boot.

Wild weather leaves one person dead as it moves south-east

RLWC2013: Sonny Bill not available for New Zealand’s World Cup defence due to ‘other commitments’