Weekend cruising on the Norfolk Broads

The golden rule of cruising on the Norfolk Broads is to give way to sail boats. Our instructor couldn’t emphasis that enough. 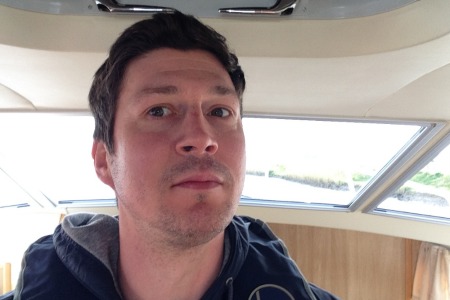 Life jacket and James Clark with his serious face on.

Within an hour of leaving Potter Heigham we came across a group of sailing boats darting erratically from side to side along the river without consideration for any other vessel. To a novice they looked out of control and it dawned on me that disaster could be imminent as I attempted to cruise around the boats.

One of the sailors pointed out the direction we should take to prevent a head on collision, while others expected us to be able to move our 35 ft Supreme Light cabin cruiser out of the way as sail boats headed fast toward us. Not an easy manoeuvre for a first time skipper.

After surviving our run-in with the sailing party, we cruised for a further 45 minutes on to Ranworth. Useful tip they have free mooring.

Ranworth is popular, so if you plan to moor here it’s probably best to arrive early afternoon or late morning during the weekends. We arrived on a Friday and it was close to dark, but it’s April and there was a space. 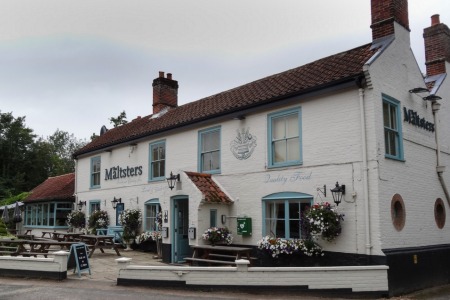 Everything we asked for was provided by the great staff at The Maltsters photo by Michael Button.

One of our favourite things about the Broads is there is a great pub in every village. Ranworth has The Maltsters which my keen eye spotted as we turned from Malthouse Broad and sailed into the mouth. It’s a busy pub with plenty of staff, has a decent menu, a maned pizza oven outside the front and enough booze to get you through the night. Everything we asked for, they provided well into the early hours. We couldn’t think of a reason to leave haha.

Despite the hangover from hell, I was beginning to enjoy life on the wide open spaces of the Broads.

Cruising along at a maximum speed of six miles an hour is a terrific way to take in some fantastic scenery, like the ruins of St Benet’s Abbey and watch some amazing bird life. Pairs of swans flying towards us close to eye level, hissing geese and grey herons kept us entertained for hours. 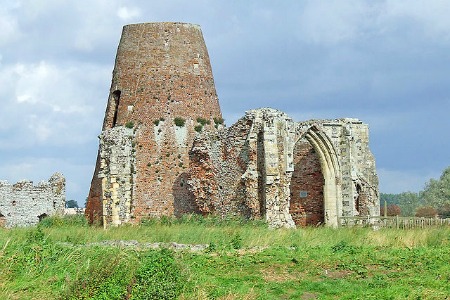 On Saturday we sailed to Horning and moored close to The Ferry Inn, where we chatted with like-minded drunken sailors drinking pints of local ales. According to the one of the barmen, most visitors head along the Broads at leisure, from one pub to another. 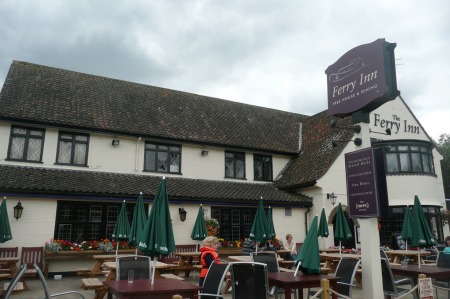 The Ferry Inn carvery was the best I’ve had photo by John Stratford.

We decided to eat before leaving and opted for the carvery. I’m no novice when it comes to roast dinners and carveries, as an Englishman I’ve had a fare few thousand slices of roast beef and Yorkshire puddings throughout my life. Without exception The Ferry Inn carvery was the best I’ve had. Forget the two slices of beef served up at many an establishment, here we were treated to a pound of the juicy beef and as much of everything else as we could eat. Are we going again? Absolutely.

Our vessel of choice for the weekend was the Supreme Light. The main cabin was spacious and although I couldn’t imagine how anyone could cook dinner for four in the kitchenette with ease it was apt for what we wanted it for, mugs of tea and bacon and egg sandwiches.

We decided on the Supreme Light as we wanted a double bedroom, toilet and shower each. Why share when you don’t have to?

These days, boating holidays on the Broads seem to be a popular choice for groups (they have boats that cater for two to 12), birthdays and those who want to escape city life for a while.

The Herbert Woods boatyard is located on Bridge Road Potter Heigham, Norfolk NR29 5JF on the A149, 17 miles north-east of Norwich.

Less and More – The Design Ethos of Dieter Rams

Hong Kong Getting Around

The old and the new in Transylvania, Romania