Welcome to the jungle: magic and madness in the Amazon rainforest, Peru

I’m being ushered down a gangplank on the darkest of nights, one devoid of stars and surely impossible for even the most
avid carrot-eater to adjust their eyes to.

My apprehension is captured in the gaze of a torch-bearing boatman, who steadies my stare as I clamber on to his 25-seater craft in Leticia, Colombia’s most southerly city.

A frontier settlement of sorts, Leticia sits on the border of Peru and Brazil to create South America’s Amazonian triangle. The area is known as ‘the lungs of the earth’, thanks to its being responsible for 20 per cent of the world’s total oxygen supply.

The Amazon does trickle into Colombia, but I want to explore its upper tributaries so I can delve deeper into the world’s most species-rich tropical rainforest. Hence the boat trip – a necessary evil that’s taking me 10 hours southwards, towards the murky waters of Iquitos in Peru, the largest jungle-locked city in the world.

I try and focus my excitement on Iquitos – the destination, not the journey – as our snug, petroleum-scented vessel speeds down river.

As the first streaks of a russet dawn stain the sky, I spot small communities congregating on the roofs of their rain-soaked abodes. It’s the worst Peruvian flooding in 22 years and I am in deep. 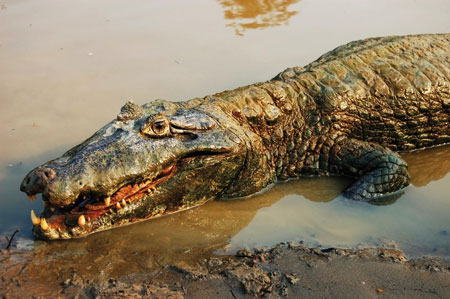 Some cities I instantly fall in love with for their high-octane, 24-hour madness. New York, Bangkok, Cartagena and Buenos Aires are up there with the best of them. Iquitos, sadly, is not.

It’s got all the mayhem – thick blankets of smog roll into every corner of town, while spluttering Latino-style tuk-tuks thunder past at frightening speeds all night long – but no soul.

Like an overdose of Marmite, I just can’t stomach it. Fortunately, I’m not here to loiter.

I gratefully disembark and meet my guide, Jorge, a native of the Yanamono region of Peru. We slip out of the smog-fest without looking back, and head 70km south to where the river meets Rio Yanayacu, a tributary on which our base camp sits.

The ride is peaceful and pacifying after the urban swirl, and my tiredness dissipates at the thought of the wilderness that awaits.

Hopping out on to an elevated gangway with stilts, I learn our rustic lodgings are perched immediately over a piranha-infested swamp. Sleep walking or taking a nighttime dip, therefore, is not advisable.

Neither is a preoccupation with technology; there’s not a wifi connection or phone signal to be found, just hammocks, books, games and the ever-present rustlings of life in the jungle.

It’s strangely comforting, as confirmed by Jorge, who declares: “If the jungle is silent, be cautious. It means an anaconda is nearby.” 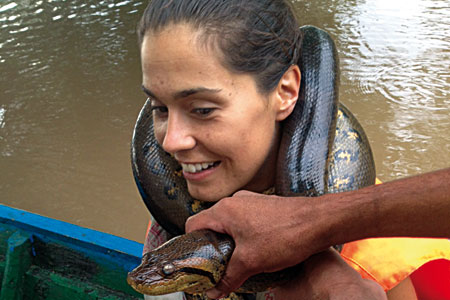 After we’re greeted by local Peruvian tour company Maniti Expeditions’ beaming, personable hosts, we head off to a small estuary in a rowing boat in search of caimans (a sort of South American alligator) and one of the world’s largest freshwater fish, the paiche.

At more than five feet long and sporting devil-red scales, these bad boys look as if they would gobble you up the second you slip overboard. But they’re actually timid creatures that simply have a good appetite.

“It’s the piranhas you need to look out for,” grins Jorge. At first glance, these small black fish, the Amazon’s best-known scavenger, don’t look like they’d put up much of a fight. On cue, Jorge wiggles his bamboo fishing rod and a piece of bait in the dark waters around us.

A frenzy of scales and flashes of razor-sharp teeth erupt in the shallows. “If you’ve bloody cuts or it’s your ‘lady time’,” says Jorge a little awkwardly, “don’t fall in or put any body parts in the water”. Got it.

Despite the warnings, we linger in this section of black water, primarily because piranhas have a reputation for tasting damn delicious.

We sling old-school wooden rods over the boat side, using raw chicken as bait; the dark waters explode once more. Lightning-fast scales divebomb the hooks and I lift the rod from the water, unfortunately sans lunch.

These buggers are smart. I repeat the process, hooking more raw flesh on to my rod and plunging it deeper. I’m about to give up when a sharp pull on the rod hints of success.

I yank hard and a six-inch whiskered catfish comes flying out of the water, almost slapping Jorge clean in the face. It’s not razor-toothed or particularly terrifying, but it’s an edible start to my fishing career. 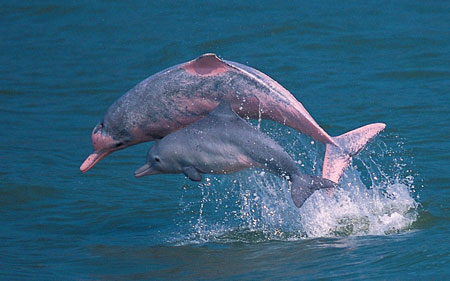 After devouring our freshly barbecued catch back at base camp, we depart to visit a local indigenous tribe.

The boat weaves silently between six-foot reeds and tall spiraling trees dangling vines – which I’m tempted to swing on – while others drip with bulbous red fruits pock-marked by peckish scarlet macaws.

Everything is comically surreal in its hypercolour, as though I’ve stepped into a Disney movie.

Thirty minutes and not a single tourist later, we’re hiking through undergrowth and sliding along muddy paths laced with intricate spider webs.

I’m not in any rush to see anything eight-legged. As if reading my mind, Jorge is quick to point out that “when you’re this deep into the jungle, there’s always an element of surprise”.

Comforting words. I’m just happy I can still hear frogs belching in the undergrowth; the noise a reassurance that an anaconda isn’t close by. Five minutes and one near quick-mud fatality later, we spy a sleepy arachnoid shuffling up a tree trunk. Anyone who says furry animals are cute clearly hasn’t done a stint in the Amazon.

Continuing up a trail that’s now a virtual mud flow from recent precipitation, we’re led into a clearing where 18 indigenous locals and a tribal elder are gathered. 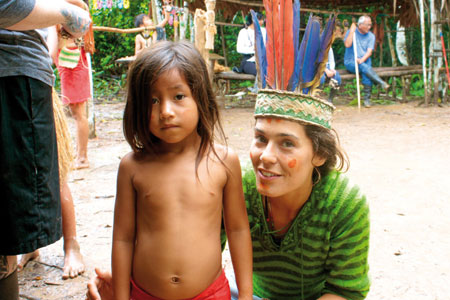 Makeshift wooden shelters built into a concentric circle frame the space. The elder says nothing, but nods simply at us before smudging red splodges of pigment – squeezed from the local sumac berry –  on to cheeks, foreheads and chins. “This means you’re welcome, and signals to other tribes you’re friends of the Yaguas,” Jorge informs us.

We proceed into the clearing and watch as the tribe initiates a fertility dance, which we’re soon dragged into, boy-girl-boy-girl, conga-style. Chanting ensues.

The elder then lets out what can best be described as a war cry. He makes a beeline for me, points to my retro Casio watch and smiles suggestively. “Do you want to make an exchange?” Jorge interprets.

The elder has already begun gesturing between his magnificent corona (crown) of red and blue macaw feathers and my well-worn eBay bargain. I have no clue what the time is anymore. 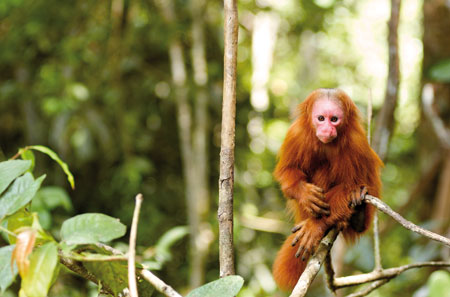 I sleep deep, waking once to check for tarantulas under my bed, then again to a sinister splash in the water beneath my cabin. Sometimes, in the Amazon, it’s best not to probe too far.

We breakfast early on eggs and coffee, and enjoy the tranquil, ethereal light afforded by a morning storm, before leaving for a waterlogged Monkey Island.

Home to 15 species of indigenous monkey, the island is a must-visit in this region.

Fifty minutes later and we’re re-enacting Noah and the Ark; large Amazonian howler monkeys, spider monkeys and a particularly pretty squirrel monkey fly into our boat from the branches above.

They land without apology on our heads and shoulders and attack the bags of bananas we’ve brought.

With 12 monkeys in the boat, plus a giant green, orange-winged Amazon parrot and three scarlet macaws, we feel like we’ve reached capacity.

Then a longboat appears through the reeds beside us – it’s a local, his son and their catch of the day: a two-metre anaconda with a body wider than a rugby player’s thighs.

The native offers it up to hold and I succumb, my eyes agog. The snake coils itself around my neck; I’m both terrified and awed.

The beast is removed and a prehistoric mata mata turtle with Batman-esque armour popped in my lap. Its dart-shaped head disappears into its shell and I can’t blame it – what with squawking parrots, gargantuan snakes and an army of monkeys, the scene is a bit much for me too.

Buzzing from our run-in with some of Amazonia’s finest specimens, we take a different route back through the river’s shimmering waterways.

A pink freshwater dolphin appears beside the boat, extending its nose amicably like a human tipping their hat to say hello. We’d been warned that spotting pink dolphins when the water’s this high can be tricky, but it seems luck is on our side. 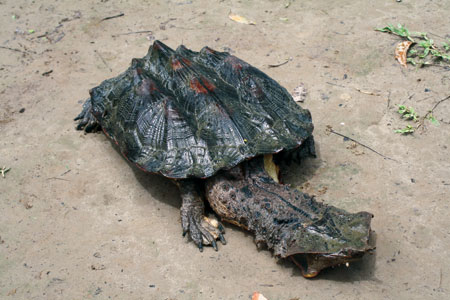 Jorge suggests we celebrate with a trip to the local ‘off licence’, a hut 30 minutes north that’s home to a local distiller of potent Amazonian sugar rum. Despite the fact it’s barely 11am, there’s a collective nodding of heads.

We trek over muddy hills until we reach the hut and procure three bottles of 45 per cent proof liquor that’s less than a week old. It costs £1.

Our toast happens later that afternoon, all glasses facing towards the river. To the Amazon – a place of magic and madness. It’s the lungs of the earth, and I feel lucky to have seen it breathe.

When to go: July to December tends to guarantee the least precipitation and consistent sunshine, which means better opportunities to spot wildlife.

Accomodation: In the jungle, Albergue Tacana Comunidad Multietnica de Tacana is a tranquil guesthouse with rooms from £7pn, including breakfast. alberguetacana.com