West side glory in Macarthur

It must be from living in London and watching Bridget Jones’ Diary too many times – seriously it’s always on over there – because I’ve always been enamoured the English  ‘mini break’. The one where they leave the hustle and bustle of London and are transported to the countryside in less than an hour. Little did I know, Sydney has a little piece of the countryside on its doorstep too.

At just a 45 minute drive from the CBD you’ll find yourself in the Macarthur region, comprising of the townships of Camden and Campbelltown. Now, I’ve always viewed these parts of the world with a little bit of Sydney snobbery, but it was with an open mind that I hopped in a hire car. As the Pet Shop Boys blared through the airways (who chose these station settings?) we proceeded to “Go West.”

Unfortunately for me, the GPS has other ideas. She is literally playing hard-to-get, sending me on a wild goose chase so far south that I’m almost an extra on The Shire.

A few phone calls later we are back on track. Unfortunately it’s now the weather’s chance to turn on me. The rain belts down on our little hire car. Here’s a fact for you: it rains more in Sydney than it does in London. Yep, it’s true. The reason? Because when it rains in Sydney it bloody pours. London may be constant, but it’s a soft whimsical drizzle, about as polite as rain can get. Sydney is a bastard.

With all of this frustration, it’s a good thing that Go-Karting is first on our to-do list out west. It doesn’t matter that it’s raining when we eventually get here. In a go-kart, this just adds to the fun. It’s time to blow off some steam behind the wheel – without causing grievous bodily harm to my passenger or myself.

Fastland Karting is in an industrial estate where no one can here you scream. Once you’ve got your helmet there is no briefing other than which pedal does what. Zooming off into the distance, my back tyres fishtailing in the wet, I make my way around the 500 metre track. I crash into the boundaries, ram into my friend’s vehicle and overtake her as she does her best impression of a soccer mum picking up the kids. (Clearly she isn’t suffering from the stresses of a dyslexic navigation system).

The rain is pouring down, saturating my clothes but right now I feel like Schumacher whizzing around the track. You get ten minutes to belt around the course, attempting to beat your previous time through hair pin turns and open sweepers. It feels as if I’m fast enough to qualify for Monaco. Sadly, the staff print me off my time sheet afterwards and I discover that speed is in the eye of the beholder – not the speedometer. I get back into the hire car, drenched, and zoom off to take pole position next to a truck.

“At the round-a-bout take the second exit,” says my GPS nemesis.

“Why can’t you just say right?” I scream. I probably need a few more laps around the racing track. 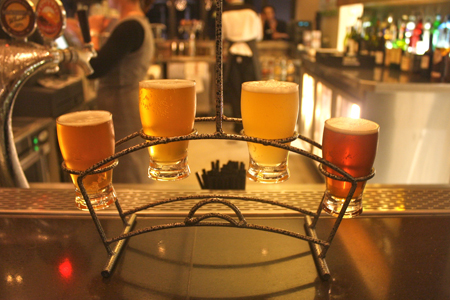 That night, after a hot shower, we head off to check out the country nightlife. We’re told there’s a microbrewery in town that is going to offer us a different kind of pit-stop. Okay I have to stop with the racing analogies now.

Infusion Bar and Brewery is located in Campbelltown Rydges so you might have to share the bar with a few straggling wedding guests, but the modern bar does offer some prime dysfunctional family viewing.

We ask the bartender for a tour of the working microbrewery which is visible behind floor-to-ceiling glass. Inside it’s cold and smells surprisingly of citrus.

If you think the west is Carlton Draught territory, think again. We sample some great local brews (named for the surrounding areas) on a tasting rack – the gorgeous Appin Ale; the refreshingly fruity Fisher’s Ghost Lager; and the Macarthur Wheat with lovely hints of coriander. I adore the Razorback; a dark ale that’s surprisingly sweet and perhaps a little too easy to drink. The bartender tells me: “they’re all made from natural ingredients, so you won’t get a hangover.” I want to test this theory but we’ve made dinner plans and must head further west into the countryside.

Back in the car we head down the dark and winding Menangle Road, wondering if Ms Evil Navigation is luring us somewhere sinister. Upon reaching the old inn, built by convicts in 1843, our nervousness is quickly dissipated by super friendly wait-staff. Menangle House is in a converted stable and warmth from the fireplace blankets us as we gorge on selections from the country farmhouse-style menu.

The next day we awake to sunny skies and fresh country air. We have breakfast at the local Arts Centre amongst tranquil Japanese gardens. This is the peaceful kind of Sunday most Sydneysiders can only dream of. Filled up with a big breakfast and channelling some Zen Buddhism I don’t even mind if the GPS wants to direct me in the wrong way. She’s just misunderstood, I muse.

Thankfully we reach our next stop without any hitches. The Australian Botanic Gardens are located on Mount Annan, set in 416 hectares of hills and lakes, making it the largest garden of its type in the country. We’re all set for a bike ride but it seems we’re hindered by the hangover of last night’s rain. As tempting as a 14km bike ride sounds right now, a guided tour with the park ranger sounds even better.

Hopping in his truck we are taken the top of Sundial Hill where we have 360° views of the surrounding countryside and views of the Sydney skyline. I can’t believe the city can be seen when right now it feels a million miles away. As we cruise around, the ranger points out a blue tree that looks starkly out of place amongst all of the green.

“The mysterious blue tree – I bet you’ve never seen one of these,” the guide says.  I take my sunglasses off, rubbing my eyes in disbelief. “Only joking,” he says, “the tree is dead but it has been painted blue. People like to get their wedding photos taken here, I don’t really know why.”

“Maybe they’re looking for their ‘something blue’?” The country air is making me very reflective.

Next we are shown the ‘wedding knot’ which seems much more symbolic for a day of nuptials. Made from dry stone, the wall sculpture entwines over itself to symobolise a lasting relationship. 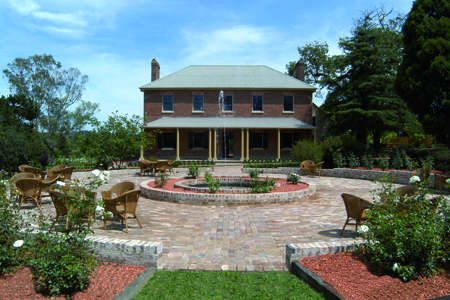 It wouldn’t be a fairytale ending without galloping off into the sunset now would it? And that is precisely what we do next at the Sugarloaf Horse Centre.

The heritage listed farm was built in 1835 and has over 600 acres of property. The sun is shining so it’s a popular day for a trot. So much so that the guide asks me if I wouldn’t mind taking one of their biggest horses.

“His name is Ben, he’s an old boy so he’ll behave himself.” I look around, everyone else has slender, shiny horses with funky names like Thunder, Lightning and Dusty.

Mine looks like a Trojan War horse – and what kind of name is Ben for a horse? He’s not the most clever horse either. As we wait for the rest of the group to saddle up, Ben goes wandering as I flail around on his back. “Um, hello… where is he taking me?” I ask.

“Don’t worry, he just likes to wait at his post.” Right, so he’s not only huge, he’s also a huge loner.

I wait in the shade at Ben’s post while the rest of the group gather together in the sun getting to know each other. Finally the leader whips him with a massive rope, motioning him join the others. He’s so big I have to duck my head to get through the stable.

Finally we’re off and Ben and I join the group – dawdling at back of course. It’s my first time on a horse, so I don’t mind going slow, especially when I am sitting at dizzying heights.

We canter through the hills, around the canals and trot around the trees. I’m warming to Ben, he’s a sweet old thing, I think. He occasionally lets out a sigh, like he’s having a lethargic Sunday.

Some of the other horses go for a gallop, I watch the riders kick them with both feet to get them to move fast.

Happy to meander along slowly, I switch off, enjoying the sunshine, the gentle galloping and the fresh mountain air. I’m just happy Ben’s going the right way.

Gay parents in Australia get equal rights for parental leave

Night of the Dead

48 hours in Stockholm: Swede as!