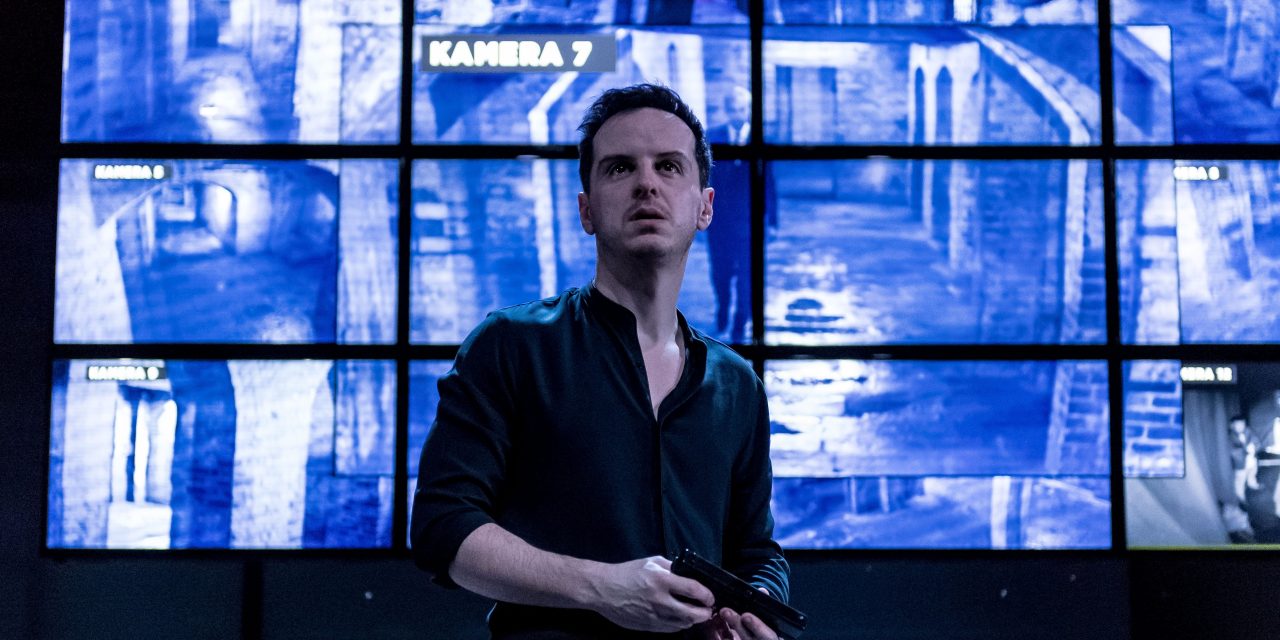 One of the main problems with any performance of Hamlet is that the audience knows it so well. As Denmark’s Prince embarks upon his most famous soliloquy, the audience takes an almost audible intake of breath as we await how this particular actor will deliver the question.

In this respect Robert Icke’s Almeida Theatre rendition of Shakespeare’s play is no different from the thousands of other performances delivered over the four hundred years since the Bard first put quill to paper, but where it is most definitely different is in the staging.

Gone are tunics and daggers to be replaced by designer suits and tanks. From the outset, as TV monitors show a Danish television channel’s broadcast of the state funeral of Hamlet’s late father, this production is thoroughly contemporary. The appearance of the late King’s ghost is captured on CCTV monitors, Claudius’ reaction to the play within the play is recorded on video, and Fortinbras’ drive through Poland is revealed through 24-hour TV news.

This approach works to perfection, both enlivening some of the rather dry parts of the play and emphasizing how the play is still relevant to a modern day audience. Indeed Claudius’ line of Hamlet “Madness in great ones shall not go unwatched” is perhaps more relevant today than it was at Shakespeare’s time, especially considering events across the pond.

However, none of this contemporary trickery detracts from the beauty of Shakespeare’s language. Indeed, the speeches are delivered with great clarity by all actors – sadly, often not the case – and the key soliloquies afforded much respect. My only criticism was with Hamlet himself.

Andrew Scott has received much deserved fame for his portrayal of Moriarty in the popular BBC serialisation of Sherlock. Clearly he has talent, especially for such character roles, but whether he has either the gravitas or voice to pull off the most demanding role in English theatre, I am not quite sure. Arguably, the support actors stole the show. Peter Wight was exceptional as Polonius, and Juliet Stevenson and Angus Wright cut very impressive figures as Gertrude and Claudius.

All in all, a most interesting and intriguing take on Shakespeare’s longest play, but at 3 hours and 40 minutes running time, avoid making any plans for later on in the evening.

Hamlet is playing at The Almeida Theatre until 15th April. For more details visit http://www.almeida.co.uk. Theatre Review: The Pirates of Penzance