Interview – Festival of the Spoken Nerd: The comedy-science troupe on perfecting the formula for laughs and a little learning, too

Brainy and accessible folk like Brian Cox have made the wonders of the universe a fascination for us all.

And with the likes of physics-educated comic Dara O’Briain challenging us with the wonder of sums on TV, too, the nerds have risen to the top of the cool tree.

Starting out before their time, funny and clever comedy trio Festival of the Spoken Nerd have been melding science and belly laughs in their stage shows since 2010.

“There have always been hardcore nerds,” Perth-born Spoken Nerd-er Matt Parker tells us ahead of a busy few months of brain-challenging, funny-bone-tickling activity.

“But people are realising that you can enjoy and take delight in science without it feeling like you are back at school. There is no test at the end [of our shows] – you don’t have to understand everything, you just come along and enjoy it.” 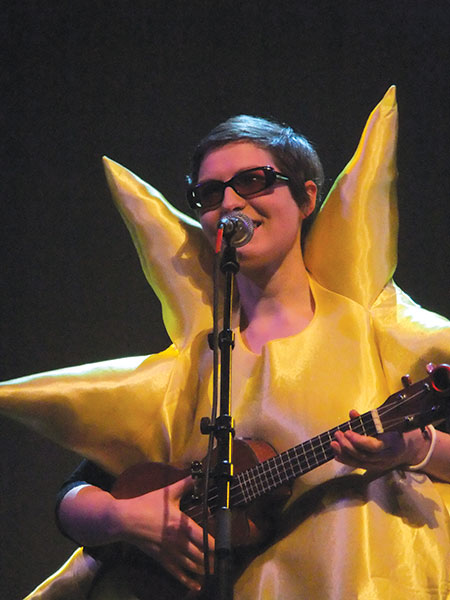 A great example of this is the Inspiring Science season kicking off this week at the British Library (March 11-24), which promises a combo of comedy, artworks, philosophers and extreme puppeteers (seriously) to get you excited about science.

The Spoken Nerds are appearing towards the end of the run, with their deliciously pun-tastic show Full Frontal Nerdity.

The esteemed institution let the Nerders “rummage through their archives” for the show, a pantheon to human history, endeavour and achievement hidden deep below the streets of north London.

“We got taken down in to their basement, which is three or four levels down – deeper than anywhere on the Tube and one of the deepest points in all of London,” Parker enthuses.

“They’ve rooms and rooms of incredible books and so we each had to hone in on one avenue each.”

Helen Arney, Spoken Nerd’s resident physicist and musical comedian (and also a member of musical comedy act The Balconettes) went to their sound archives; stand-up and former Blue Peter resident science bod Steve Mould checked out the patents; and Parker went to delve into the history books, or rather the newspaper accounts of the past few hundred years that lie squirreled away. 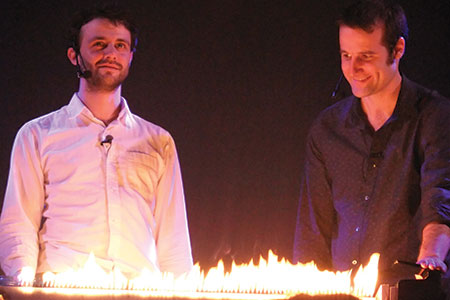 “They have every British newspaper since the 1820s, and pretty good coverage before that, too,” Parker recalls. “I was looking through 1750s newspapers. They’re a very quick, contemporary account of things.

“Books are much more thought-through, they’re a cleaned up account of what happened, but papers are an account of what people were actually reading every day and what was really happening.”

This detailed history of mankind’s evolution, and our dealing with that, manifests itself in the show with a look at technological moments, such as when the first telegraph signal was sent across the Atlantic way back in 1892, as well as a ‘best of the front pages’, with a few asides about past knowledge’s inferiority to our current ‘educated’ selves.

We can’t claim to be wholly wisened and know it all right now, though, as Parker hastens to add.

Their Inspiring Science comedy-and-cabaret mind assault will be followed by Technobabble in April, a ‘best of’ performance that pulls together their computer-based shows with a focus on tackling what we don’t know about our desktop wonders – the little machines that shape our lives, but about which we know so little. 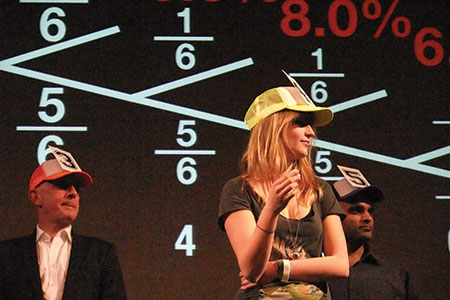 “People know they have a mouse and a keyboard and somewhere inside magic happens. There’s a hard drive, a processor and RAM but they don’t understand how a computer does calculations – it is just an inanimate object.”

To illustrate the inner machinations of this magical apparatus, Parker demonstrates how the signal in the chips inside our phones and computers works with a painstakingly created 10,000 piece ‘computer of dominoes’ that adds binary numbers together – our computers’ basic function.

“We knew we were going to knock bits over though so we left gaps – our motto was, ‘trust the gap’. Once you knocked something over you got someone else to fix it as you didn’t want it to get personal. You don’t want to be putting up dominoes with a sense of revenge.”

Where computers have taken over the world now – not literally … yet! – there are some areas in which Technobabble suggests early estimates of our technological achievements have not been fully realised. 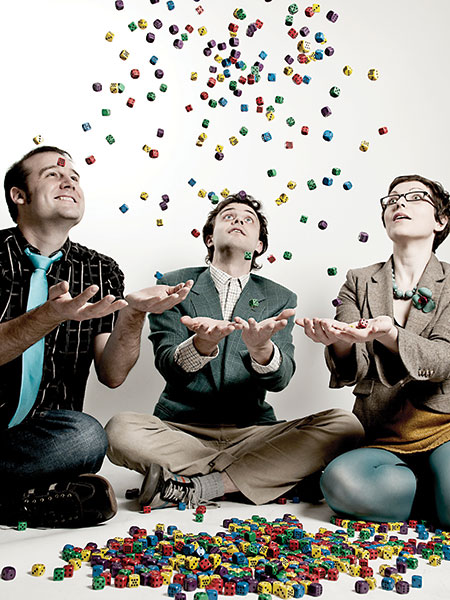 “Robots have been the ones that have let us down,” Parker laments, perhaps longing for a Robocop or HAL-ready present in which chores and maybe even law enforcement could be carried out by man-controlled automatons.

“Computing power has vastly exceeded any predictions,” he continues, “but any form of artificial intelligence has lagged way behind. We are going to show examples of AI, though – there’s a thing called Chatbot that you can chat with, but it is very obviously only a computer. We’re still a long way off [being able to create] anything that will pass as intelligent.”

Despite a focus on improving our understanding of science and technology, the Nerds’ shows are just as much about our successive, rhythmic, spasmodic expiration with open glottis, or laughs.

Their mix of comedy, cabaret, live experiments, songs and audience participation has won them plaudits galore since they pooled their smarts after a meeting at the Edinburgh Fringe.

“It’s a comedy show about science and technology and maths and geekery and nerds,” Parker says.

“But you can come along if you enjoy watching The Big Bang Theory but don’t always get all the science-y stuff.

“If you happen to know some science-y stuff there’s another layer of jokes for you and some amazing bits of science, too.”

Time for some mind expansion. 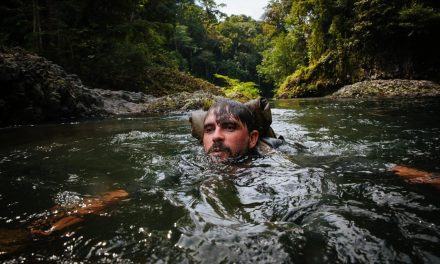