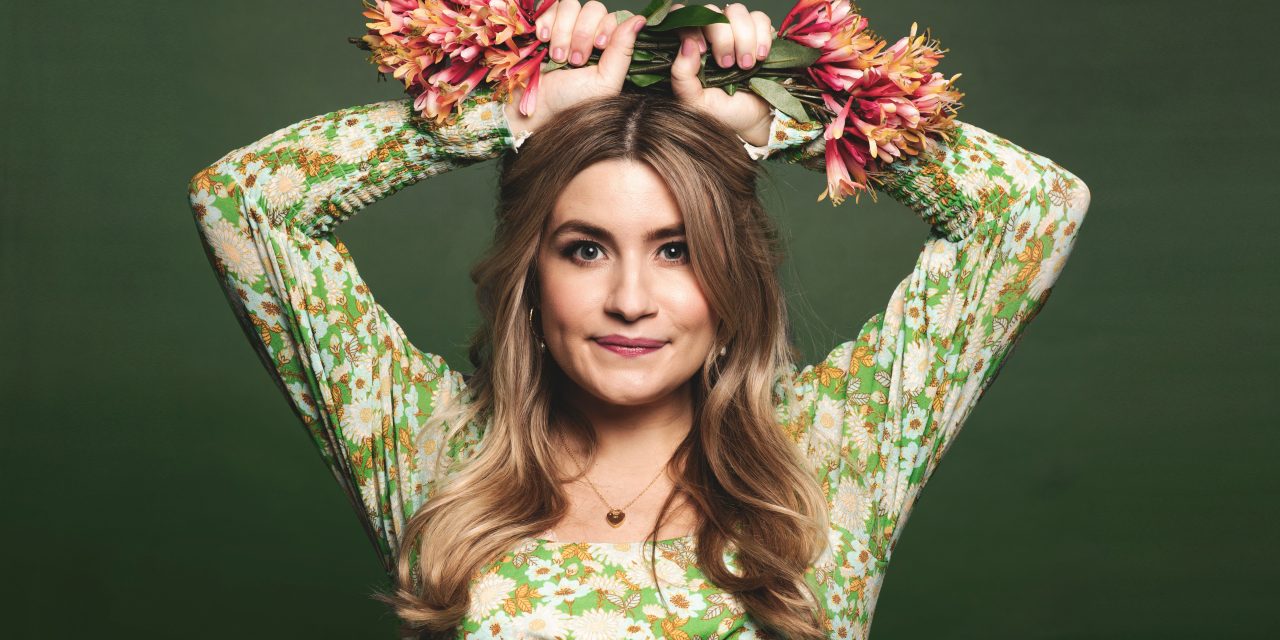 We caught up with Harriett Kemsley to find out about her tour inspired by some f**ked up place she imagined as a child. Thankfully Honeysuckle Island sounds pretty cool, so we expect the tour to be a similarly inspiring!

Pretty much every comedian that I’ve spoken to over the years has haphazardly ended up as a comedian with no real structure or plan to go that way. How did you get started?

So mine is quite unusual. I actually haven’t met another comedian that’s had the same situation. It was actually my parents that suggested it. Usually parents have much higher expectations. They don’t want their children to go into comedy. Not mine. And so they were watching Live at the Apollo one night, and I’d finished university, and I wanted to do acting, but I didn’t know how. And they were watching Live at the Apollo, and then the next day I spoke to them, and they were like, “Why don’t you try stand-up comedy? Stupid things always happen to you and it’s funny. You should get up and do it on stage.” And I was like, “This is mad.” Because stand up felt like… I don’t know. Just a world just a million miles away from me. And they were like, “No. Just go do it and don’t tell and anybody.” And I did, and I think now they regret it but it’s too late.

That’s much better than the usual story which is, “I was drunk, and I stood up at an open mic and someone liked it.”

Yeah, exactly. And there was really nice moment last year, because I did Live at the Apollo, and it felt like a really circular moment.

Talking of getting the laughs, you’ve married a comedian, and you’ve recently had a child together. Do you think she’s got your funny genes, and what are you going to do if your child isn’t funny?

She is very funny, but I think all parents are completely biased. So I think she will hopefully grow up and just look at our lives and just think we’re ridiculous and become a scientist. I hope she goes the opposite direction!

Does being professionally funny as a couple, does that help when you get woken up for the fourth time in the middle of night?

Absolutely not. No, we have a fun time. It’s nice. We both like to have fun and not take things too seriously. And so I think that is a good approach. It’s very strange though. We’ve got a very calm, sweet baby who just doesn’t… No one understands how she’s come from us. It’s like both of us have had affairs!

And if all these sleepless nights take their toll finally and you lose your sense of humour, what sort of proper job are you going to get?

This is the problem: there’s no other options. It’s too late! I’m in too deep. I did waitressing and bar work, and I had this mad job when I started stand up where I typed up the news, and I had to be at my desk at 6:00 AM. And then I’d be there from 6:00 AM until like 2:30, and then I’d try and sleep but I’d be too wired before my gig, because I was so new. And then I’d do my gig and then I’d get home, and then I wouldn’t be able to sleep. And then I’d have to leave at 5:00 AM, and it was just chaos. And when I did eventually leave, I told them I was doing stand up. I’d kept it secret for months. And they were like, “Oh my God. Thank God. We thought you had a really bad drug problem.” Because I was just so tired, and I was just walking around talking to myself. It was chaos. And then after that, I worked for the NHS booking hospital appointments. I think the NHS can’t fire you. I think that’s how I ended up being there for so long. So there’s really slim pickings.

Not long ago, sadly, we lost your TV dad, Sean Lock, who was genuinely one of my favourite comedians, and I’m still pretty gutted that he’s no longer around to bring a little bit of cheer to our lives. But what’s your favourite memory of Sean?

I think just getting to work with him was such an honour. When he died, you could just tell how… it just had such an impact on the comedy world. And the whole world… people I’ve never even met where saying to me how sad it was. And he just was so funny and so brilliant. And it felt like he was really relatable, but then also he just had this madly original, creative brain. And so, just getting to work with the few times that I did was… I just feel very lucky, because he really was just the absolute best.

I think I was more gutted and upset than the recent Queen’s death, to be honest with you. It had a bigger impact on my life.

He was our Queen!

Moving on to lighter subjects, your show’s named Honeysuckle Island, and honeysuckle’s quite a sweet-smelling plant but also it’s pretty poisonous. Does that resonate with your show?

That’s a nice way of looking at it. I think that’s the way that people often describe me. That I’m talking about big issues or intense subjects with a smile on my face in a fun, light way. But the show is about this dream travel destination that I created when I was 11. And on it had everything a pre-teen could want. I did it at school, and it had zip lines and waterfalls and monkeys. And I looked at it again closely last year, and I saw that in the corner I’d drawn a cellulite machine. That’s just mad that I was aware of that at 11. And I spelt cellulite right and island wrong. I was like, “Something is up with my priorities here.” So yeah, so it’s looking at the beauty industry, which I guess is a very on the surface lovely, beautiful thing. But then underneath it, we’re being told all these subliminal messages and all this noise from such a young age.

If you could recreate your Honeysuckle Island dream now as an adult, what would you change?

Well, I guess I would get rid of the cellulite machine. That’s the main thing. I think that it would just be really nice… I guess, the moral is to be able to be really aware of when you’re being told things subliminally. But I would definitely still keep in the monkeys and the zip lines. I would really like to go to an island right now. Although, with baby, I don’t know if there ever really is a holiday.

Sticking with the island theme: so you’ve found a Honeysuckle Island, but you can only take one piece of music onto this island. What would you take?

My god. Okay, I would probably have to go old school, and it would be Waterloo Sunset by The Kinks.

And there’s slightly limited resources on Honeysuckle Island, so you can only grow the ingredients for one meal, and that’s going to be your forever meal too. What would you choose?

Okay, I’d have brunch with loads of add-ons. So I’d have pancakes…

Pancakes and proper brunch and then an add-on of chocolate Guinness cake.

And you can only take five people because the boat’s really small that you’re going to this island on. Who would you take with you?

Oh my God. That’s such a good question. Obviously, all my family. Well, definitely my baby.

Do they all fit in? We’re going to have to take some casualties!

I’m going to have to ditch? Well, I don’t know if I should bring my baby if I’m going to a desert island. She’d have a nice life… Oh my God, what an intense question.

It’s like Sophie’s Choice or something. It’s too early for this for me. Well, I guess I would just have to say I want my family to have really good life not on the island, in civilization. And then I guess I would bring with me the Spice Girls.

Have you got a good joke for us at the moment? Have you got one that’s… Obviously, Edinburgh has a favourite joke each year. Is there one that you’ve picked over the months?

Oh my God. Are you really going to make me tell you joke on the phone?

One thing I talk about in this show is I talk about the beauty industry. So I say that the average American woman spends $15,000 in her lifetime on make-up. Which is so much money; it’s such a waste, because you could get two boob jobs for that. And then you’d have six boobs. So that’s quite a fun joke to say.

And are you looking forward to your tour? You’re obviously moving out of the Soho Theatre and taking it around the country. Is that a logistical challenge for you now, or is something that you’re looking forward to, getting out and about?

I’m really excited. I mean, I started doing stand up like 10 years ago when you didn’t travel all around the country and just do these little spots and getting mega buses. And it’s just part of the life, I think, and it just feels so exciting that it’s back. And to be able to do my own show places and that people come and see it is… I don’t know if I’ll ever be able to not be really thankful for that.

Harriet is on tour across the UK,