Hugh Jackman interview: Does the Oscar-nominated Aussie actor and Les Miserables star have a dark side?

Tell the Australian he doesn’t appear to have many flaws, though, and he is happy to set the record straight.

“Russell Crowe recently reminded me I’m very bad at saying no,” the Sydney-born star points out, trying to find a skeleton in a squeaky-clean closet.

“I am indecisive, I am a terrible handyman and I can be incredibly vague. Oh, and I stole a pack of Chickadees when I was about eight.”

Jackman could go on Oprah and admit to being involved in a doping scheme or reveal he’s been adding horsemeat to supermarket burgers, and you get the feeling the public would forgive him for it.

Few actors have ever seemed to be such thoroughly decent, stand-up guys as the 44-year-old, his effortless charm and wholehearted approach to acting, whether singing or slicing up bad guys, striking a chord with just about every demographic out there.

Perhaps most notable is how remarkably centred Jackman has remained throughout his career, something he puts down to regular meditation sessions.“Meditation changed my life,” he says. 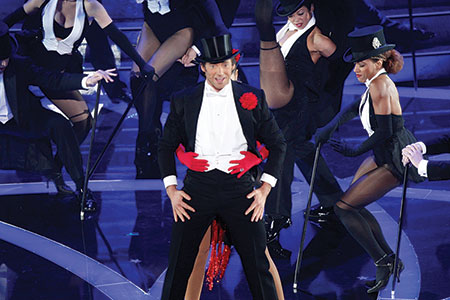 “Twice a day, it allows me to come back to my centre and who I really am, and drop all the labels – actor, father, husband, all the roles we play, and just to experience myself.

“It’s a simple thing, it’s not a religious thing. It’s just that I find the practice of doing that reminds me of who I really am.”

But who is Jackman, really? Undoubtedly a man who likes to try new things and take risks.

In addition to being a Tony award-winning stage actor, he has managed to veer between film genres.

While the movies have sometimes been dodgy, the actor has always been captivating, whether doing a sweeping epic (Australia), sci-fi (Real Steel), action (Swordfish), superhero movies (X-Men) or providing his voice for animated features (Happy Feet).

This month he adds gross-out comedy to his CV with Movie 43, a slice of lunacy from Peter Farrelly (of Farrelly Brothers fame) in which a huge ensemble cast – including Kate Winslet, Naomi Watts and Halle Berry – make fun of getting your period and pubes. 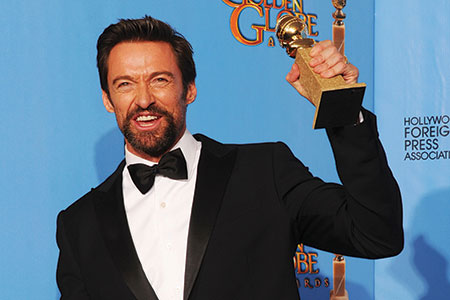 However, the Jackman performance everyone will be talking about over the next few weeks as we head towards the Oscars will be his startling, Golden Globe-winning turn as Jean Valjean in screen musical Les Misérables.

“Valjean, I think for any actor, is right up there with Hamlet,” he enthuses.

“It’s one that demands everything in the musical sense. It’s not just emotional and physical, but it’s also vocal and so, in every way, it was demanding more than I had ever been asked to play before and often all at once.”

So challenging a prospect was the making of the film – director Tom Hooper insisted cast members sing live on set – that Jackman almost pulled out at the rehearsal stage.

During his Golden Globe acceptance speech he recalled how his wife, Deborra-Lee Furness, talked him out of quitting, calling her “the greatest woman in the world”.

It was an emotional moment that underlined the important role Furness has played in keeping the star grounded and on the right track as far as his profession is concerned. 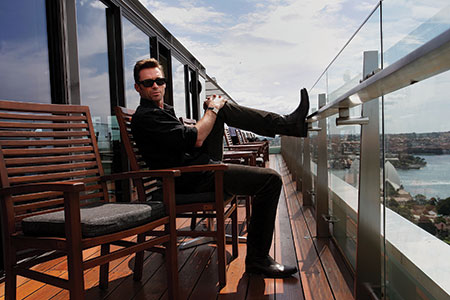 The couple, who met on the set of Australian TV show Correlli, have two adopted children – Oscar, 12 and Ava, 7 – and Jackman stresses the importance of explaining the trappings of fame to his kids.“Nothing passes quicker than fame,” he says.

“I am constantly having to talk to my kids about it because weirdly they are thrust into a world of fame where they don’t want it. Or actually, more worryingly, my daughter does want it.

She’s like, ‘the paparazzi are this way, let’s go this way.’ That worries me more than anything, but I have to protect them.

“It’s a complicated beast and it’s not without its challenges, but ultimately, I try and always just see it for what it is.”

Watching the media swarm around the star, it’s hard to imagine that, at one time, Jackman was so unsure about making it as an actor that he kept his career options open, eyeing up – funnily enough – a career in journalism.

“I was always one of those people who didn’t know what I wanted to do, and when I studied acting, that’s the first time I felt I loved it,” he recalls.

“But I wasn’t a kid, either. When it happened I was a realist and knew that 98 per cent of actors don’t do this.

“So I thought if it didn’t work out, I would just go and do something else.”

Jackman’s big break arrived, of course, in 2000 when he was cast as hairy hero Wolverine in X-Men. 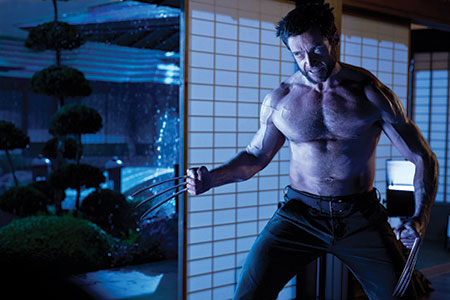 He landed the role after Russell Crowe turned it down and put in a good word for his fellow Australian with director Bryan Singer.

The two actors, who star together in Les Misérables, have remained close friends.“I owe a lot to Russell in many ways, one of which was him turning down Wolverine and him mentioning me to the director, that was a big one,” Jackman says.

“But I have asked his advice on several occasions and he’s always been generous to me and a good friend.”By stepping aside, Crowe not only gave Jackman a movie, but a franchise.

Later this year the actor will play Wolverine for the sixth time in The Wolverine, which sees rough and tough mutant Logan claw his way through Japan.“I am very, very excited about it, “ he says.

“I think it’s the best one we’ve done, so I am very happy. There’s a lot of singing in it. After Les Mis, everything is going to be sung!

“No, I would be spat at on the street by Wolverine fans. That’s one character that I can tell you will never sing.”

So, no Wolverine: The Musical just yet, but if there is one man who could get geeks to accept a singing superhero, then surely that man is Hugh Jackman.

Movie 43 is released in UK cinemas on January 25. The Wolverine is due for release in July. Catch Les Misérables in cinemas now

Interview with The Dears