“This album defines what we’re about and why we’re different to everyone else,” frontman Michael Brown tells us, and he has a point.

The powerhouse trio started out in Adelaide in 2006, recording a couple of EPs – Into The Night and L.A.? – before last year’s long playing debut, Spaces In Between, its trio of singles, Too Much, Devil Ride and Spaces In Between, winning them Planet Rock radio playlisting.

They then headed out on a three-month tour of the northern hemisphere, and wound up winning said Classic Rock Roll of Honour award at the end of the year. But rather than let this success go to their heads, they hunkered down and worked on the follow up, the storming El Pistolero.

“I had this idea to make it a bit more cinematic, and to be based around Robert Rodriguez’s movie Desperado,” guitarist and vocalist Brown says of the album’s gestation. “We wanted it to have a cool Tex-Mex vibe with our stoner rock sound.” 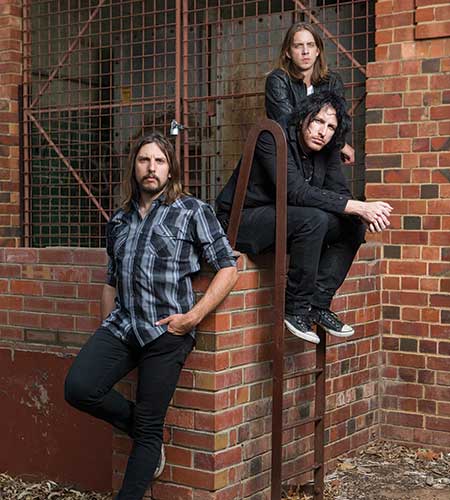 While the band have taken on a Western vibe in places – especially in the video for lead single El Pistolero, check it out online – summing up their sound as simply stoner is something of a misnomer. There are elements of stoner in there, for sure, amid their classic rock leanings and even grunge influences, like a jam with Soundgarden, Kyuss and Orange Goblin, with Zeppelin joining in. “We have a lot of different approaches,” Brown says of their songwriting. “That’s why there is such a variety of stuff on the album.”

For their sophomore stab at international superstardom, the band holed up in LA’s Revolver Studios with renowned producer Kevin Shirley, who has Led Zeppelin and Slayer on his CV as well as Down Under stars Silverchair and Cold Chisel.

Brown recalls they were hesitant at first about working with a label-picked knob-twiddler. “We weren’t familiar with how Kevin worked and so we were apprehensive. But in the studio he was immediately one of the group – and he swore like a machine.”

The album was recorded in an ultra-short seven days, Shirley working the band hard and capturing their famous live assault on record for the first time. 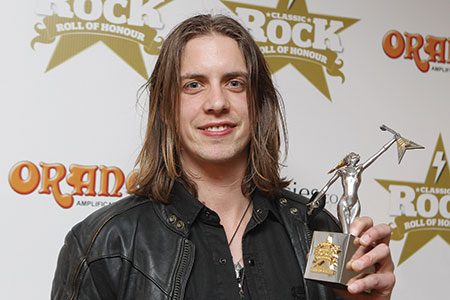 “We had been used to recording a part then going into the control room and really scrutinising it, but with Kevin it was more like, ‘Yeah, cool, we got it!’. [El Pistolero] is more balls to the wall [as a result] and closer to what we do on stage. It should translate really well to the live environment.”

Tracer’s sound has always been about the live show, their wall of noise belying their modest three-piece stature. It is a three-piece, however, that has taken on a different look since the band’s tour last year, with founding bassist Leigh Brown deciding to step down, leaving Brown and drummer Dre Wise to look for a new recruit.

“It was extreme,” Brown recalls of this tumultuous period. “We had just lost a third of our band! But we’ve now got Jett [Heysen-Hicks] who fits the bill super well. He is used to playing in a three-piece and understands the Tracer sound. He immediately fit in sonically and personally and we’re looking forward to getting out on the road with him.” 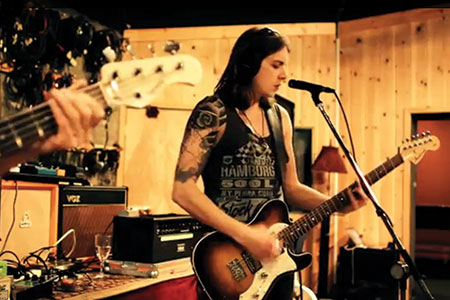 And well they should, as Europe and especially the UK have always been fertile land for Tracer. “We’ve always had a good run in London,” Brown enthuses of what has already become a firm favourite touring stop for the Adelaiders.

“We thought the UK would be a difficult place to crack into, but we were lucky with the Planet Rock radio support. London was our first show when we did our first headline tour [last April]. We got off the plane and played the gig at the 800-capacity Islington Academy, which was sold out with people singing our songs back to us – it totally blew us away!”Tracer have in many ways found their success on these shores, something Brown in part puts down to the music climate back home right now.

“Australia has a strong rock soul, but it’s not popular right now. There is this underground thing full of people who are sick of hearing crappy music on the radio that has no soul.

“There will be one of those revolutions soon when bands come back and people want to hear live music rather than a DJ. But at the moment the climate for rock in Australia is filled with schmaltzy indie rock and that sort of shit!”With their growing popularity, Tracer have bagged a gig at the Isle of Wight fest, too. So are they prepared for that unpredictable element summer festival season can throw at you – the Great British weather?

“I’ve seen those pictures of Glastonbury a couple of years ago with everyone covered in mud,” Brown counters with a laugh. “I figure if it gets too muddy I’ll just get muddy too. It looks like fun!”

Tracer have a “cool new album and stage show” to bring back to the UK, which Brown admits is in part influenced by their tour with six-string legend Zakk Wylde and his Black Label Society band last year – “it was like watching what we should be doing, a real learning curve”. So is there anything else the trio are looking forward to when they hit the capital this week?

“We have challenges on every tour,” Brown reveals of their extra curricular hobbies. Setting fire to hotels? Drunken debauchery that would make Jimmy Page shudder?

“The last one was ‘fun with statues’,” Brown says, explaining a time-killing, on-the-road photo game. “One of us would make out it was blowing us off or something. For the tour coming up it’s about being a super badass and doing stuff that a sign tells you not to do, like ‘Keep off the grass’. Everyone will be able to see what big idiots we really are.”

Big idiots, but ones about to be bloody big rock stars.