How has it been taking your new show, Fully Functional, out on the road?

We’ve had a good run, it sold out in Edinburgh and it’s the best reviewed show I’ve done for years. A couple of years ago, there was a backlash against me.

I got a couple of one-stars and there was maybe a feeling I wasn’t as good as people thought I was.

Do negative reviews ever bother you?

No, you have to take the good with the bad in this world. You can’t be the type of comic I am and expect everybody to like you, either.

Of course. It’s not my intent to upset people, but it is expected, so I did play up to it a little. I don’t angle my material that way – I like the jokes that I think are funny. It just turns out that I have a particularly sick sense of humour!

For the most part, I don’t go for offensive – I go for funny.

What new topics have made the cut?

There is a bit of autobiographical stuff – I am having a kid soon. There’s three or four short stories and if you want to hear me doing the atheist stuff, there will be a bit in there, too.

Do you enjoy doing your ‘greatest hits’?

It seems to be what people like to hear me doing. There will be a few sex jokes, and all that good stuff, too.

That said, I have a story about an aeroplane ride, which sounds pretty mundane, but it is probably some of the best stuff I’ve done.

Now, with that and the US TV show Legit, the people that gave me one star probably feel a bit foolish.

What’s Legit about then?

My job in Hollywood is to be a stand-up and try to sell TV shows to different networks. I have sold a few scripts before, but this is the first one that has been made in to a full season.

We did the pilot last October and we start filming again this October for episode two. It’s basically stories from my stand-up put into sitcom form – the pilot features me taking a friend with muscular dystrophy to a brothel, which was big piece in my last tour.

We have DJ Squalls – he was the skinny guy in Road Trip, as the kid with muscular dystrophy – and we have Dan Bakkedahl from The Daily Show as my best friend and Mini Sterling, too, who was Doctor Evil’s wife in Austin Powers.

There’s a big gap between the episodes …

Yeah, I am trying to lose about 12 pounds before we start because the second carries on from the first and in it I was a lot lighter.
A year has passed and I have got a little fatter.

Do you have to temper your sense of humour for TV?

It’s on FX, not HBO, so we can’t swear, but part of me wants to reach a larger audience, and maybe sell it to the UK and Australia.

My experience is that you come in with a script and then they rewrite it so it looks nothing like the show you went in with. But here it still looks much like what I had in my head to begin with. 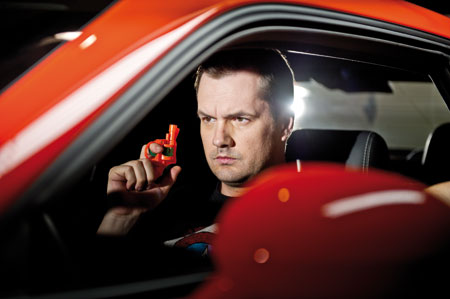 What have you learnt about TV?

It doesn’t have to be too joke-heavy, story is more important. If you go joke-joke-joke, you’ll end up with something like that shitty [BBC One] sitcom In With The Flynns.

It’s all jokes, but is it any good? No, it’s rubbish. Story is more important than anything, and if you can laugh along the way then that is great. The Office had a great story.

Are you comfortable with acting?

Not yet, I think I’ll get better as the show goes on. But I am lucky that, as the show’s creator, no one comes in and gives me grief if I don’t get it on the first take.

I am exec producer and could write anyone of the other actors out of the show – just have them killed off!

Do you enjoy living in the US?

I drive a Dodge Challenger the same colour as in the Dukes Of Hazzard and I don’t think I’d be able to get away with that in Britain.

Do you miss anything from back home?

I miss family and friends, but I go back every year to see everyone. I’m happy with my girlfriend and the baby on the way – that’s my family now.

I’m not becoming American, or my kid, but I do follow baseball. Once they got rid of the North Sydney Bears, I was done with Australian sport.

Is stand-up on hold for a while then?

Until January or February, when I’ll have to write a new hour of material. My plan is to get a second season, and then try and write a movie.

Hopefully, if the show is successful then people will call me a writer instead of a comedian.